What Americans – And Israelis – Don’t Understand About The IDF 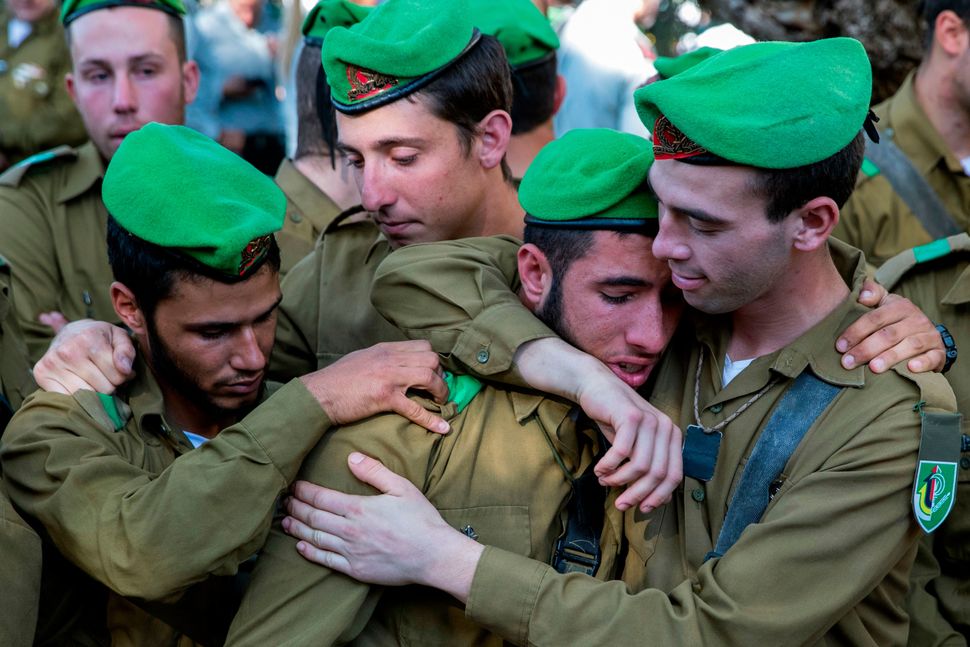 As an adult I moved to Israel, where the soldier was not the Diaspora’s mythical hero of legend but rather an ordinary youth who exists in daily reality, ubiquitous across the whole of Israel, from the shuk to the kikar. No bus or train departs without an impromptu squadron.

The ubiquity of the soldier, a consequence of Israel’s draft, makes it almost inevitable that Israelis will have a close personal connection to someone in uniform. Israel has the most active-duty soldiers per capita of any democracy, with more than 2% of the population serving. By contrast, only 0.4% of the U.S. population are active-duty soldiers. This means that parents know with a mix of pride and fear that the day will eventually come when they will have to bring their own child to enlist.

For the vast majority of Israelis, the fate of a soldier could be the fate of their soldier — their parent, their spouse, their sibling, their child. In a sense, this results in a vulnerability for Israel’s military — the love each person has for its closest family members.

What this means is that Americans and Israelis have strikingly different conceptions of the typical Israeli soldier. Where Americans see an invincible warrior, Israelis see their vulnerable child.

And yet, neither of these is accurate, and their respective inaccuracies have consequences. For each distorts the political orientation toward the Israeli army in an alarming way. And their divergence contributes to a gap in understanding between Israelis and American Jews.

Around half the population serves in the army after high school (Arab citizens of Israel are not conscripted, though Druze are). And because it’s compulsory, the kid who always tried to weasel out of gym class is as much a soldier as the jock. The not-so-bright kid who cheated his way through algebra class is as much a soldier as the prodigy valedictorian. The Israeli army is not an army of the best and the brightest. It is an army of those who happen to be the generation on the cusp of adulthood.

The army entrusts soldiers with tremendous responsibility to defend the country. But it also releases them to their parents’ homes for weekend and holiday leave. It’s an army where when soldiers face problems of one kind or another, their parents will call up their commanders and complain.

Because Israeli soldiers are so tightly knit into the fabric of society, the capture of IDF soldier Gilad Shalit by Hamas in 2006 was a nightmare for the whole country. Throughout the long years of his capture, Israelis waited with bated breath for any sign of life. They prayed for his immediate release. They feared the worst. It did not matter if they had never laid eyes on Shalit before. Seeing his photograph on the cover of the newspaper was enough for them to tangibly feel the pain of his absence. After two years of this, Israeli pop star Aviv Geffen released a song called Ha-Yeled Shel Kulanu — “Everyone’s Child”: “Our hopes are like a stretched out sail / and every sign from you is like a gust of wind,” Geffen sang. “You will return, you will return / You, behold, are the child of all of us.”

This framing of the soldier as everyone’s child is an astute characterization of the relationship between Israeli society and the individual Israeli soldier. But it’s not unproblematic. By this framing, a universal, collective parenthood takes possession over an infantilized soldier.

In other words, Geffen’s song was not merely a forlorn outpouring of emotion. It was political. It’s something Geffen was explicit about. “It is our obligation to do everything to influence the political echelon to make a courageous decision,” he said, meaning, a decision to bring Shalit home, whatever the cost. The proceeds generated by the song helped fund a campaign to that effect.

Shalit was released in a 2011 prisoner exchange. The cost to bring home one Israeli soldier was ultimately the release of 1,027 prisoners held by Israel. (Incidentally, one of the Palestinians released was Ahlam Tamimi, a co-conspirator in the Sbarro suicide bombing and the aunt of young Palestinian icon Ahed Tamimi. She is currently on the FBI’s Most Wanted Terrorist list.) Soon thereafter, Ronen Bergman traced the growing disproportionality in Israeli prisoner exchanges in a New York Times Magazine essay entitled “Gilad Shalit and the Rising Price of an Israeli Life.” “Israeli society’s inability to tolerate even a single soldier held in captivity results in popular movements that have tremendous impact on strategic decisions made by the government,” he wrote. In the future, the government could be pressured into releasing many more. Needless to say, this puts Israel at a serious strategic disadvantage relative to its enemies.

The “everyone’s child” framing skews Israeli national security in other disturbing ways as well. It is a motivating factor behind the so-called Hannibal Doctrine, by which the IDF allegedly used to prefer a soldier be killed than captured by the enemy to be used as an invaluable bargaining chip (it’s recently been canceled). And it diverts the focus from the management of threats from Gaza to the return of the bodies of Lt. Hadar Goldin and Sgt. Oron Shaul, who were killed in action in 2014 and whose remains Hamas holds ransom to this day.

And perhaps the “everyone’s child” framing is the main driver behind the repugnant support for Elor Azaria.

Azaria is an IDF soldier who shot a Palestinian attacker in the head several minutes after the assailant had been shot and incapacitated, an episode caught on video by the Israeli human rights NGO B’tselem. The IDF investigated and eventually charged Azaria with manslaughter. He was convicted, and sentenced to 18 months in prison, though it was recently announced that he will be released in May after just nine.

But from the beginning, much of the Israeli public commiserated with Azaria. There was substantial public pressure that the powers-that-be not charge Azaria with a crime, not convict him, give him a light sentence, and pardon him.

This outpouring of sympathy for someone who killed a disarmed and incapacitated assailant in contravention of the IDF’s own rules of engagement shocked many, including many Americans raised on the myth of the strong Israeli soldier.

And yet, because of the “everyone’s child” approach, many Israelis see Azaria as their own child. The disbelief in his guilt, the excuses for his actions — these are protective parental instincts. Like Shalit, Azaria is everyone’s child. Azaria’s sister specifically called on the public to pray for legal decisions beneficial to “everyone’s child.”

But a real army does not act in loco parentis.

IDF Chief of General Staff Gadi Eisenkot was one of the few who seemed to have his priorities in order. “An 18-year-old man who enlists in the IDF is a soldier, and not ‘everyone’s son,’ and he must give his life to protect us,” Eisenkot said.

But ultimately Eisenkot could not withstand the immense political pressure, including pressure from his boss, Defense Minister Avigdor Liberman. He reduced Azaria’s already lenient sentence by four months.

Prime Minister Benjamin Netanyahu initially appeared to condemn the shooting but later cozied up to Azaria’s parents and called for a pardon.

Only President Reuven Rivlin held the line by rejecting Azaria’s request for a pardon. “[A]n additional lightening of your sentence would harm the resilience of the IDF and the State of Israel,” he wrote in a letter.

In short, the Israeli familiarity with the Israeli soldier, in both the colloquial and literal senses, warps Israelis’ perceptions of the Israeli army. The resilience of the army and the country demands a cold public understanding that a soldier is a combatant. A soldier is one who kills and who is liable to be killed or captured. This is what it means to be a soldier.

A soldier cannot be everyone’s child at the same time as serving as everyone’s guardian. The role of the soldier is to protect, not to be protected.

But Americans’ lack of familiarity with the Israeli soldier beyond the stereotype warps their perceptions of the Israeli army, too. They see the Israeli army as immensely powerful, if not superhuman. While this translates into a sense of pride for many Jews, for many others it makes the IDF a Goliath to a Palestinian David.

Where an Israeli might see a soldier in Hebron as their own child surrounded by enemies, an American would more likely see a fighting machine with a dominating presence.

When Ahed Tamimi kicked, slapped, and swung at the Israeli soldier outside her home, Israelis saw her as a violent enemy coming to hurt or embarrass their child, while liberal American Jews saw it as a physically harmless symbolic gesture against a well-armed soldier.

Israelis don’t internalize the violence of military occupation because it is “everyone’s child” enforcing it — “How could our little baby harm a fly?” But Americans overemphasize the violence of the Israeli occupation due to a similar blindness: “How could superhuman mythical creatures impose anything short of massive violence against a population of normal humans without the ability to fight back on the same level?”

The American perception is also particularly vulnerable to slipping into classical anti-Semitism. Just as anti-Semitism inveighed against oppression at the hands of the preternaturally powerful Jew, so too the Israeli army is an almost inevitable receptacle for these demonizing anti-Semitic tropes.

These are the harsh realities of state power, under which the Jewish state’s power is simply unexceptional.

What Americans – And Israelis – Don’t Understand About The IDF