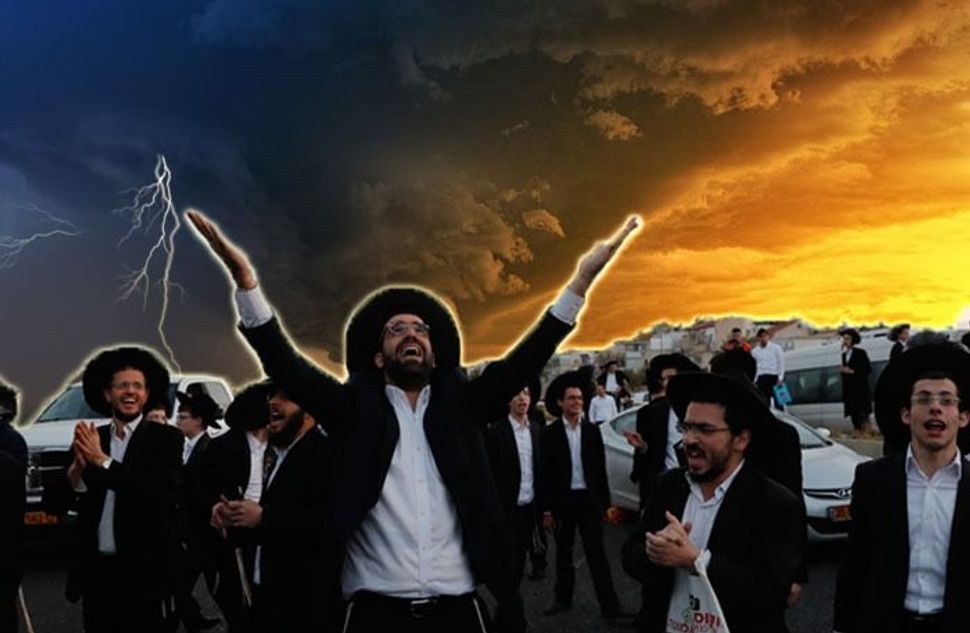 Last week, a D.C. Councilman named Trayon White took to Facebook to claim that the Rothschilds control the climate.

That European business dynasty has for many years been the stand-in for Jews in the minds of anti-Semitic conspiracy theorists who see the Jewish family empire, and by extension Jews in general, as pulling the strings of the World Bank and various governments.

What prompted the councilmember to post his rumination about the weather was a brief snowfall in D.C. He expressed surprise at the white stuff falling from the sky and asserted it was the work of the Rothschilds, who have “climate control” abilities. He soberly explained that members of the family “create natural disasters they can pay for to own the cities.” Then it came out that it was not the first time he’d spoken thusly of the Rothschilds.

In the wake of his apology and his characterization of the unfortunate episode as “a learning experience,” he should be forgiven for falling for a centuries-old hoax.

Besides, Jews do control the weather.

Well, “control” is a bit of overstatement. But we have undue influence over it, at least in the eyes of the Jewish religious tradition and those who revere it.

As it happens, the thought is very much a seasonal one. The days of wine and matzah rapidly approach. Nor’easters notwithstanding, spring, and Pesach, are in the air. And on the first day of the holiday, Jews the world over who recite the traditional Amidah will omit, for the first time since the end of Sukkot, the incantation to God, “Who causes the wind to blow and the rain to fall.”

The Amidah, known to many as Shemoneh Esrei (literally “the 18,” a reference to the number of blessings it once contained; a 19th was added in Talmudic times -– long story), is the essential part of the Jewish prayer service. While chapters of Psalms, the Shma and other elements are added to the morning service, and, on certain days, the Torah is read, it is the Amidah that the Talmud calls tefillah, or “prayer.”

And during the winter months, a phrase is inserted in its second blessing, acknowledging the Creator’s past granting of the precipitation needed during that season, and implying a request for that gift. Another phrase added to the Amida in the winter explicitly asks that God “provide dew and rain as a blessing over the earth.” Though the supplication is intended primarily for the Holy Land, the need for precipitation is, of course, universal.

Of course, our prayers aren’t always answered in a positive fashion. That’s the nature of prayer; we can only request. But our actions empower our requests; the Hebrew verb for “praying” exists, pointedly, only in the reflexive form, implying that it is essentially an act upon ourselves. And so we do, or can, make a difference. In the Shma as well, the blessing of rain is overtly tied to the Jewish people’s actions, specifically to our fealty to the Torah’s prescriptions.

So Trayon White was right. He was just overly focused on one Jewish family, and may not have appreciated the mechanism through which we Jews have an effect on, among other things, the weather.

I was one of the 92,000 members of the tribe who gathered on August 1, 2012, at MetLife Stadium for the Siyum Hashas celebration of the conclusion of the 12th cycle of the seven and a half year Daf Yomi page-a-day Talmud study program. Before the program began, the sky, solid with dark gray clouds, let loose a strong shower. Those of us who had arrived early imagined we would be singing, quite literally, in the rain. And many had prayed the afternoon prayer with special focus on the omission of the rain phrases.

Then, at 7:00 in the evening, just as the program was about to begin, the clouds became uninterested in us and went their own way (whether south, toward Washington, I really don’t remember). Seats were wiped off and raincoats came off. The multi-hour program proceeded, dry and uninterrupted.

Certainly, as cynics were quick to point out, summer storms are known for not only their ferociousness but their ephemerality. But for some of us, the weather was being controlled, by the ultimate Controller, of course.

And we Jews did have some input.