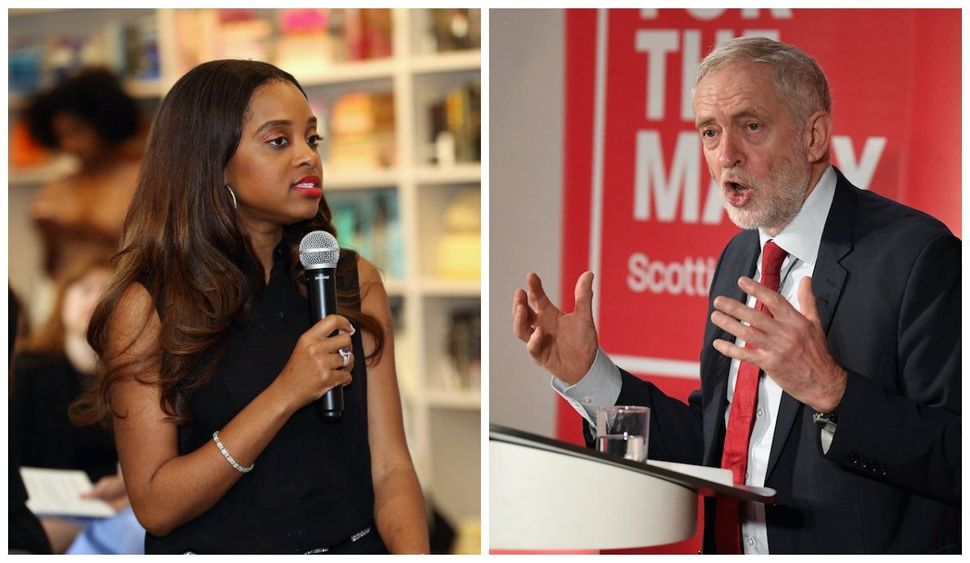 March has been a rough month for Jews. With a frequency that gave Trump administration departures a run for their money, March was filled with a stream of new reports of political leaders at home and abroad propagating or supporting anti-Semitism.

On March 16, as snow hit the nation’s capital, Trayon White Sr., a Democratic D.C. council member representing Ward 8, recorded a video. In it, he blamed the inclement weather on the Rothschilds, the famous Jewish financier family that has long been the focus of anti-Semitic conspiracy theories.

Although he initially stood by the video when questioned by the Washington Post, within hours of the article hitting the web, White apologized. “I work hard everyday to combat racism and prejudices of all kinds,” he said in a new social media post. “I want to apologize to the Jewish Community and anyone I have offended.”

White’s quick and sincere apology was especially welcome in that it stood in stark contrast to the way the Women’s March responded to accusations of anti-Semitism within their ranks just weeks earlier.

One of the Women’s March co-directors, Tamika Mallory, attended the Nation of Islam Saviours’ Day celebration, where Louis Farrakhan told the audience that “the powerful Jews are my enemy” and “the Jews were responsible for all of this filth and degenerate behavior that Hollywood is putting out turning men into women and women into men.”

In fact, Mallory not only attended the event, but happily and proudly instagrammed it. When one online commentator asked her how she could stand by Farrakhan, it kicked off days of Mallory denouncing people who dared to criticize her for associating with him — and with full support from her Women’s March co-directors, Carmen Perez and Linda Sarsour.

As an institution, the Women’s March offered only silence, until they finally issued a patent non-apology: “Minister Farrakhan’s statements about Jewish, queer, and trans people are not aligned with the Women’s March Unity Principles,” they posted in their Facebook group.

It was not what you might call a strong statement of condemnation. “Our external silence has been because we are holding these conversations and are trying to intentionally break the cycles that pit our communities against each other,” they explained.

What made Farrakhan’s so blatantly anti-Semitic, anti-LGBTQ comments so nuanced that the Women’s March needed “external silence” and time to figure out a public response?

The deafening days of silence from the Women’s March embodied what became clear time and again throughout March: there’s far too much tolerance for anti-Semitism on the Left and, even worse, our leaders and peers are afraid to admit the reality of its presence.

This problem occurs despite the fact that anti-Semitism unfortunately persists (and even increases) in the United States and abroad. It knows no exclusive party or political affiliation. According to the FBI, Jews represented 54.4% of all victims of religious hate crimes in 2016.

But when it comes from the Left, it’s invisible, somehow. Just last week, Jonathan Weisman, Deputy Washington Editor of The New York Times, wrote an op-ed titled “Anti-Semitism is Rising: Why Aren’t Jews Speaking Up?” The op-ed totally failed to mention anti-Semitism that was not exclusive to the Right, as did Weisman’s interview with NPR’s Terri Gross about his new book, “(((Semitism))): Being Jewish in the Age of Trump,” from which it was adapted.

Weisman’s book does seem to acknowledge Left wing anti-Semitism. But even an op-ed on anti-Semitism that paints it as one-side-of-the-aisle problem is frustratingly tone-deaf.

Worse, it feeds the dangerously believable and pervasive myth that Jews, one of the most loyal Democratic blocs in America, don’t need to worry about anti-Semitism from their side of the political spectrum.

This failure to acknowledge anti-Semitism in progressive political and social groups is not exclusive to the U.S., either.

Labour party leader Jeremy Corbyn is well-known for comfortably associating with and failing to criticize anti-Semites. He donated to the campaign of Paul Eisen, a notorious Holocaust denier. And one of Corbyn’s key supporters, Jackie Walker, criticized Britain’s Holocaust Memorial Day, on the grounds that she’s “never heard a definition of anti-Semitism [she] can work with.” Corbyn himself belonged to the blatantly anti-Semitic Facebook group “Palestine Live,” but he took things one step further last Friday when he defended an artist who painted a mural showing Jewish businessmen and financiers playing Monopoly on the backs of workers.

In response to criticism, Corbyn finally admitted to there being “pockets of anti-Semitism” in the Labour party.

It was better than the Women’s March, but not by much.

Thankfully, and quite heroically, the Board of Deputies of British Jews and Jewish Leadership Council denounced Corbyn’s shamefully weak response, and the next day, after thousands of British Jews marched in the streets, Corbyn managed to admit that anti-Semitism has “too often been dismissed as simply a matter of a few bad apples.”

And yet, these apologies, even when they occur, are not enough. I’ve seen this pattern of the forgive-and-forget repeat time and again. Every time a new anti-Semitic episode occurs, an event I am certain would be swiftly, severely, and correctly admonished as anti-Semitism if it came from the Right, it is simply excused or ignored when it comes from the Left.

All too frequently, friends and colleagues but also leaders and activists at large dismiss anti-Semitism as as “merely” anti-Zionist. And while that can be a real distiction, Jeremy Corbyn shows us that the latter is often just a guise for the former. England shows us nothing so much as the slippery slope from anti-Zionism to anti-Semitism.

Even where there is no anti-Zionist disguise, I still see too many on the progressive Left ignore or justify the attack.

So why can’t the Left see it?

For starters, because we have a president who has felt quite comfortable dog-whistling (at a minimum) white nationalists at different points throughout his campaign and presidency.

There is good reason to hold his side of the aisle under a far more intense scrutiny; white nationalists chanting “Jews will not replace us” killed a woman, after all, Heather Heyer, at the Charlottesville, Virginia march. There should be a loud, forceful outcry when Trump and his administration fail to respond to anti-Semitism. No one should forget that he and his wife failed to denounce the anti-Semitic harassment of journalist Julia Ioffe or that he welcomed Steve Bannon, who boasted that Breitbart has become a “platform for the alt-right” under his watch, into the White House or that he called Nazis “fine people” after Charlottesville.

But many of the same people I see rightfully calling out the Trump administration’s problems with anti-Semitism are awfully quiet when it comes to the Women’s March leaders holding onto their affection for Farrakhan, or Corbyn’s many ties with anti-Semitic groups and leaders.

Just last week, Katrina vanden Heuvel, editor and publisher of The Nation, tweeted, “Give me Jeremy Corbyn — over neocons, liberal hawks & too many US pundits, anytime.”

While the tweet came before Corbyn’s most recent anti-Semitic incident, it was already well-known – or should have been to a seasoned journalist covering foreign affairs — that his Labour party was comfortable bedfellows with anti-Semite.

While some journalists, Jewish and otherwise, are speaking out, by and large, when there are pieces about anti-Semitism in America in mainstream news publications, they are noticeably, myopically focused on the right.

It’s so tempting to shut our eyes when we see hate in a community in which we’ve felt so at home — and I speak from experience. I am a registered Democrat in New York State. During the 2016 election, I went toe-to-toe with the Weekly Standard’s Fred Barnes on the Clinton email allegations. And currently, I proudly serve my law school’s reproductive justice clinic. I cannot help but feel even more disappointment when I see such disgusting apathy towards anti-Semitism on the left.

I have hit the point where I am no longer satisfied with the “but Trump is worse” response when I question my peers, leaders, and institutions on the left. For over a year, I have felt like a canary in the coal mine when it comes to anti-Semitism on the left. I want full-throated denouncement, just as they would expect from people on the other end of the political spectrum.

Until anti-Semitism is recognized as an unfortunately bipartisan problem, it will find new ways to thrive.