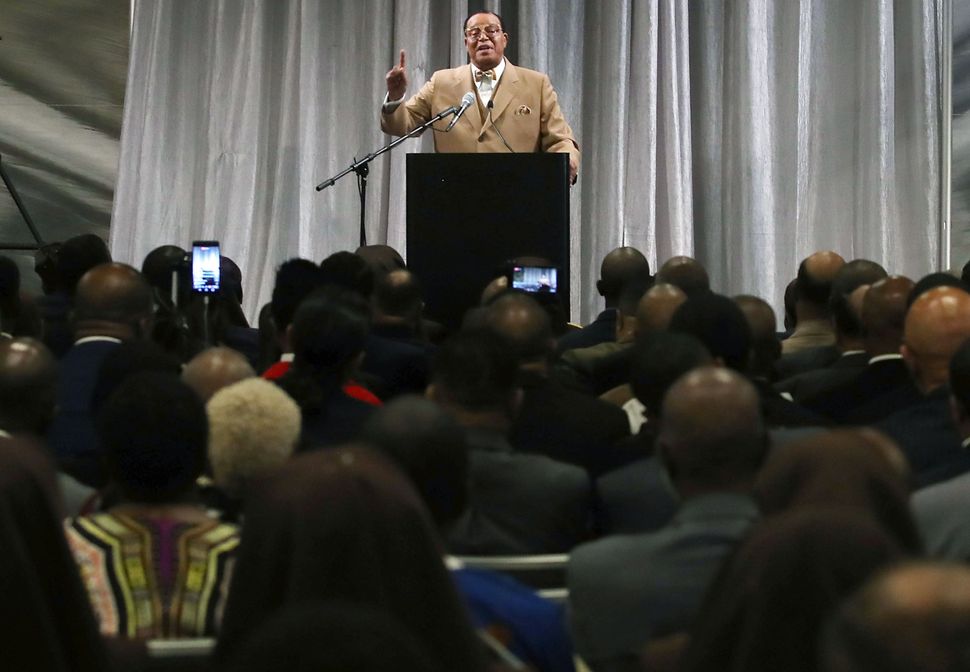 Over the past couple of weeks, a familiar character has been haunting Twitter: Louis Farrakhan, leader of Nation of Islam. A few weeks ago, Farrkhan gave his annual Savior’s Day Address, which was laden with the anti-Semitic comments he is known for. The “powerful Jews are my enemy,” he said, “responsible for all of this filth and degenerate behavior that Hollywood is putting out turning men into women and women into men.”

The comments alone would probably not have been newsworthy. What was newsworthy was the presence of Women’s March organizer Tamika Mallory at the speech.

Immediately, the calls for her to denounce Louis Farrakhan or face the consequences starting piling on. Most strident was CNN anchor Jake Tapper’s tweet:

1/ Wherein the co-chair of the @womensmarch, amidst criticism of her attendance at an anti-Semitic Farrakhan speech, tweets praise for those leaders who “have the same enemies as Jesus.” https://t.co/LaZlYobsGj

He was joined by the Anti-Defamation League’s Jonathan Greenblatt, and others. For a few days, it seemed like all anyone on Twitter was doing was demanding that Tamika Mallory apologize for her connections to Louis Farrakhan.

Mallory responded, but without explicitly condemning Farrakhan. Then the consequences began. Planned Parenthood cut ties with Malloy. “When leaders of the Women’s March — or any allied group — stray from these aspirations, we will do everything we can to help them return to our shared mission,” they wrote in a statement. “After careful review, Planned Parenthood Votes Northwest and Hawaii has decided to part ways with Tamika Mallory.”

It seemed to boggle the minds of white and Jewish people on the right and the left. Why couldn’t Mallory just denounce Farrakhan?

Well, it’s not so simple.

When Black America sees white and Jewish people demanding that Tamika denounce Farrakhan, what we see is the demand that we all do so. And this demand is not a simple one.

For while the request that people dissociate from anti-gay, anti-Semitic, anti-trans rhetoric might be a valid one, one can’t separate this demand from the fact that America traditionally only makes these demands of Black leaders and politicians while few others are expected to comply.

When is the last time someone was disinvited from Planned Parenthood for failing to call out Steve Bannon, architect of the “alt-right”? Not only did his ties to this hateful group not sink his career, but the man was a White House advisor. Then there’s the man who couldn’t bring himself to denounce David Duke. He is now the President of the United States.

Because of this unfair and unequal set of demands, when the Black community hears the demand that Tamika denounce Farrakhan, what we see is the desire to destroy a Black woman.

Furthermore, this demand comes with no context attached – context which is crucial to understanding Farrakhan. Farrakhan’s success in the Black community is directly tied to white supremacy. Absent a broader conversation and reflection on why someone like Farrakhan continues to enjoy a degree of prominence and respect, denouncing him is an empty gesture to appease those who themselves maintain problematic liaisons.

In other words, the demand for people to “call out” or “denounce” Farrakhan is a performative excercize that has little to do with upholding matters of justice. So when the Republican Jewish Coalition demands that Black members of Congress resign or when the media characterizes the left as silent, this is concern trolling at its finest. There is no context for the conversation, just a demand rooted in false equivalence. Note the irony that the same people who have a problem with so called “call out” culture and balk at meaningful dialogue on underlying issues of white supremacy and systemic racism, it is these same people who are now demanding renunciation of Farrakhan.

Anti-blackness and internalized white supremacy are accepted as part of daily life and never even addressed, let alone called out, while oaths of fealty on issues of selective concern are demanded of white supremacy’s victims. Black leaders are expected to denounce and dissociate from Farrakhan and yet anti-Semitic hate-mongers like Steve Bannon and others with ties to actual Nazi parties like Sebastian Gorka are feted at Jewish events.

We are setting standards that are not being equally applied across the board.

Many of us do not spend our time and energy feeding into calls to denounce figures like Farrakhan because we have so much on our plates with fighting white supremacy and systemic oppression. It is exhausting, and the additional emotional labor of these conversations is taxing. But collectively, we have to do the work being uncomfortable, and push through these important conversations. There are organizing and movement spaces in which women of color are expected to exist and express no emotion. If we do, we are undermined and disregarded at every step.

There needs to be an opportunity to address the presence of toxic people in spaces of justice work, without demanding labor and effort from a select few. And it’s only meaningful, often difficult conversations that will help us create better praxes for accomplishing this crucial work.

Anoa Changa is an Attorney, host of The Way with Anoa podcast, and editor of the Peach Perspective blog.