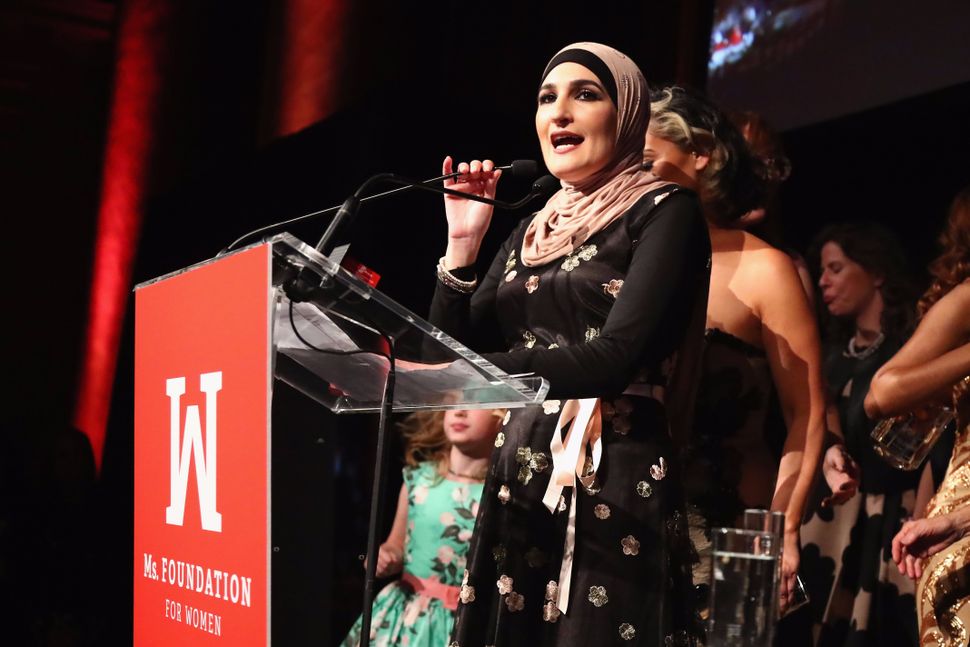 Sunday’s New York March for Racial Justice was devoted to improving race relations, combating mass incarceration and police brutality, and promoting the value of diversity in politics and society. Nevertheless, Linda Sarsour used it as an opportunity to demonize Zionists. In so doing, Sarsour not only alienated a group of Jews anxious to be part of the fight for racial justice; she also perpetuated the very forms of exclusion she claims to be fighting in her own community.

“We will not be intimidated by right-wing Zionists,” Sarsour declared — before excoriating white supremacists or racists. She also implied that the presence of Zionists made her feel endangered, according to reports from Sunday’s march. “There are instances of things that happened to me at this space that made me feel unsafe,” she said, according to Haaretz, which some took as being directed towards the contingent from Zioness, a group that, according to its Twitter bio, “stands in solidarity with those who seek social justice while promoting self-determination for the Jewish people.”

Sarsour’s message is well taken — it is our responsibility to educate our own about Palestinian rights. While there is certainly more than can be done, I hope Sarsour is aware that there are numerous Jewish groups at work to promote a two-state solution, provide aid for Palestinians, and find innovative ways to increase communication among Israelis and Palestinian (a very abbreviated list: American Jewish Committee, J-Street, AIPAC, T’ruah Rabbinic Council For Human Rights, and numerous Hillels throughout the country and the world).

Sarsour also claimed that she lived by her words of intra-group education, telling the crowd that “[o]ne of the hardest things I have ever done is combating anti-black racism in the Arab-American community, challenging my own people on issues around racism, around anti-Semitism. That is my job to do, not your job to do.”

Has Sarsour done this job, and done it well? Does Sarsour practice what she preaches?

I don’t think so. While there are plenty of Palestinian advocates who are trying to find ways to bring about peace and fight for their cause while respecting Jewish sovereignty, I have not seen evidence of Sarsour attempting or succeeding at her self-assigned task of “challenging my own people around issues of anti-Semitism.”

I have seen the opposite. Sarsour has explicitly diminished the significance of anti-Semitism, qualifying its noxiousness in a video for Jewish Voice for Peace in April. “I want to make the distinction that while anti-Semitism is something that impacts Jewish Americans, it’s different than anti-black racism or Islamophobia because it’s not systemic,” she said. “Of course, you may experience vandalism or an attack on a synagogue, or maybe on an individual level, but it’s not systemic, and we need to make that distinction.”

Sarsour appears to believe that combatting anti-Semitism should be restricted to a very specific form of discrimination against Jews. Sarsour — and, unfortunately, many others — feel comfortable denouncing anti-Semitism only when it is in the form of far-right white supremacists, such as the horror we witnessed in Charlottesville.

But if you are genuinely going to claim to fight anti-Semitism, you cannot be selective about which forms of it to denounce. Indeed, there’s a much more routine form of anti-Semitism that Sarsour not only fails to denounce but may even participate in. If you’re singling out Israel to be expunged and think it’s the one country on the planet that needs to be dismantled, that laser-beam focus of destruction on the one Jewish state is another form of anti-Semitism. If you actively deny, denounce, and demonize a Jewish right to self-sovereignty but believe other religions, ethnicities and peoples are entitled to that dignity, it is very difficult for me to believe you are truly fighting anti-Semitism.

Not all forms of Zionist critique are anti-Semitic. But some are. Take Sarsour’s tweet, “Nothing is creepier than Zionism. Challenge racism.” Or take the fact that Sarsour has made it clear that she does not support a two-state solution, but a single country, one that would inevitably remove and replace Israel. These positions skirt too close to anti-Semitism for comfort. They certainly make me question whether Sarsour is capable of being the anti-Semitism educator she claims to be.

Some have argued that Sarsour’s remarks should not overshadow the march, as Elad Nehorai did in this publication. While I very much understand and respect his concern, the fact of the matter is that Sarsour is considered one of the top leaders — if not the face — of the modern women’s movement in America. Ignoring or expunging from memory what she said is not an option. If we do, what message does it send to the Zionists who marched on Sunday, who believe what should be so obvious it’s not worth stating — that Zionism goes hand-in-hand with social justice?

Sarsour’s words were meant to send Zionists who wish to participate in the fight for racial justice a severe message: You’re not welcome here. Censor yourself. Leave your Zionism at the door. It’s an awful message. It is wrong to imply that open displays of Zionism or pride in Jewish self-sovereignty are incompatible with the fight for racial justice in this country; the very existence of Jewish Zionists marching on Sunday is the proof of that.

While Sarsour is right that Jewish groups must continue to show their respect for the Palestinian community and continue to find new bridges for cooperation and peace, it is also imperative that we speak out and hold Sarsour accountable to her hypocrisy, in the hopes that one day she will live by her words.

Emily Shire is a journalist covering feminism, politics, and religion. Her work has appeared in the New York Times, The Daily Beast, WashingtonPost.com, Slate, Salon, and other publications.