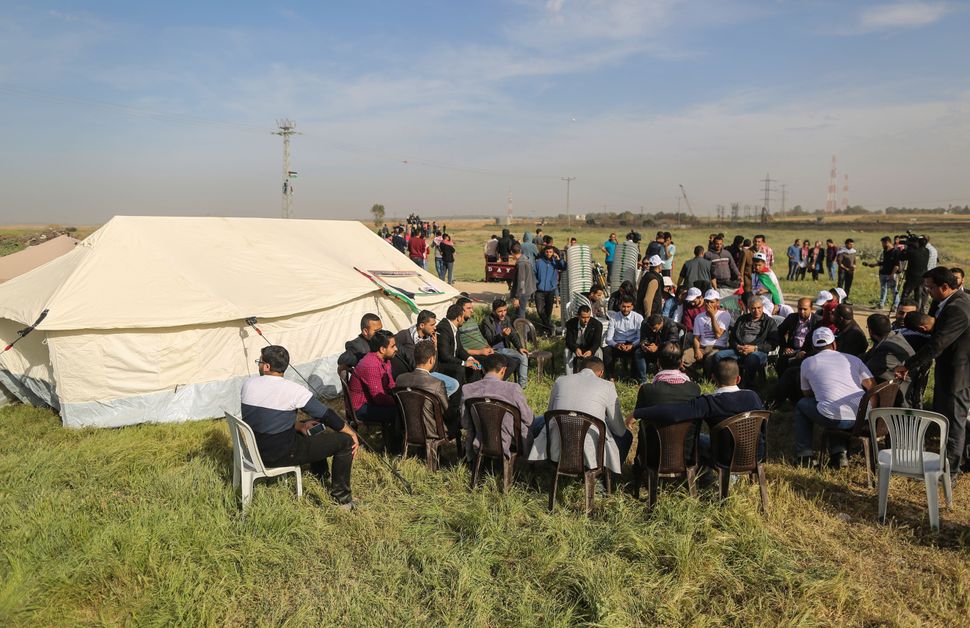 Last year at a conference in Dubai, former US secretary of state John Kerry discussed the Palestinian plight in a way that now seems prescient. He warned of a situation in which Israel faces “40,000 kids marching up to the wall every day with signs saying ‘give us our rights’.” Furthermore, explained Kerry, “I don’t think Palestine is going to be immune forever to the civil rights movements that have swept other nations in the world, and somehow, Israel is ignoring this today. That’s not leadership.”

At the time, several veteran Israeli analysts and journalists referred the Kerry’s scene of tens of thousands of unarmed Gazans swarming to the border fence and breaking into Israel as the country’s worst nightmare, if not its doomsday.

But his words seem especially poignant this week, as young Gazan activists have opted to mobilize that scenario.

This Friday, Gazans will gather at the border with Israel for “the Great March of Return,” to coincide with the first day of Passover and Land Day, when Palestinians commemorate the vast expropriation of their lands that occurred in 1976.

Preparations for the march has been taking place since U.S. President Trump’s announcement that Jerusalem is the capital of Israel, and his declared war on UNRWA in December, both of which are viewed by Palestinians as erasing their cause and their national aspirations.

Activists set up several tents near the border to symbolize the refugees’ plight, who constitute two thirds of Gaza’s population and are still alive thanks to UNRWA.

The protest organizers will start their march on Friday by setting more tents in close proximity to the separation fence, and inviting others to follow their lead. As the number of participants increases, the protest tone will escalate gradually until Israel’s Independence Day on May 15, the Palestinian’s Nakkba (“Catastrophe”).

In the meantime, and until the numbers peak, protestors will approach the separation fence empty-handed, bare-chested, as families, with women and children and the elderly at the front lines.

The plan is neither to shout political slogans nor to throw rocks at Israeli soldiers nor respond to any potential hostilities or provocations. Only Palestinian flags will unite them, as well as banners and signs calling for the implementation of international law.

They will emphasize that they are not calling for the dismantling of Israel or the displacement of its population, but rather for actual coexistence between the two peoples, the possibility of which is in evidence, with the tens of thousands of Palestinians who cross into Israel on a daily basis for work and have never caused any trouble.

People will also try to lift up the separation gates and cross into Israel. They will do this in lines and groups, walking to the furthest point they can reach, and this will be repeated from that day forth until Israel and the international community address Gaza’s unbearable suffering.

The protestors have not considered what their next step will be if they successfully cross into Israel; nor have they considered the Israeli army’s response. And yet, all alternatives are better than their daily suffering, than simply enduring the despair of living in the unlivable and futureless Gaza Strip.

For this march to fulfill its enormous potential, it needs to embarrass Israel and the international community, forcing them to comply with basic liberal sensibilities and set the Gazan population free. And this can only happen if Israel is denied any right to portray the protestors as “swarms of terrorists” trying to invade its “sovereign territory” and necessitating Israel to exercise its “right to defend itself.”

That is Israel’s ultimate weapon, which means that the success of the protest will hinge on it remaining absolutely non-violent, as well as independent and politically unaffiliated with Hamas. This latter condition is one even Hamas itself is desperate to satisfy.

Simultaneously, for the protest to succeed, international solidarity campaigns must take to the streets to defend the Palestinian protestors, explain their motives and force international organizations and their own governments to espouse a clear and supportive position on the Gazan march. These solidarity marches are likely to materialize in Lebanon, Jordan and the West Bank, but not in the West with such short notice. It means that the march will at best only enjoy good media coverage for just a few days.

Another fundamental condition for the protest’s success is that it should enjoy complete international legitimacy in its demands and rhetoric.

Unfortunately, the chosen theme is rather controversial. The goal of the march is the return of six million Palestinian refugees to Israel. Not only is this unlikely, but it also looks like a call to obliterate Israel’s Jewish identity, a non-starter for many of Israel’s allies and even Palestinian supporters.

Still, I cannot blame the organizers for what might be an overreach. As one of them explained to me, if they had made the theme of their march “stop the oppression,” it would have been thwarted immediately by Hamas, whereas if the focus had been “lift the blockade on Gaza” it would have been meaningless and drawn little attention, since that call is being shouted desperately on a daily basis ever since the blockade was put in place.

The organizers are putting their hopes in the controversy of the protest’s theme; the demand of agreeing to a fair and just solution to six million Palestinian refugees who have been living, generation after generation, in decaying camps, shanty towns and slums, denied full-citizenship, denied basic rights and now targeted for their very identity of being refugees. They cannot take it anymore.

The organizers’ optimism comes from an earlier precedent: the success of the Arab Spring, when protests that took place on the Syrian and Lebanese borders resulted in protestors actually crossing into Israel — about a 100 Palestinian-Syrians breached the fence and walked to the village of Majdal Shams in the Golan Heights, and some even took the train to Tel-Aviv. It is this episode that the protestors hope to reproduce, including the experience of walking into Israel, a land young Gazans have never been able to step foot into, and have no conception of. And yet, that 2011 march of return drew less than a hundred participants.

More and more people in Gaza, especially within Hamas leadership, find this march a last resort with great potential that Palestinians have not yet tried. Hamas and other groups are actively mobilizing for it. Hamas assigned the march file to its Youth Division, “Al-Kutla al-Islamiya,” under Hani Miqbil and Mohammed Haniya, to crowd the largest number of protestors possible.

Still, many Gazans lack the motivation to take part in the protest themselves. They tell me they are rather going to watch and observe what others will do, to see what they might achieve. It’s a sign of the times.