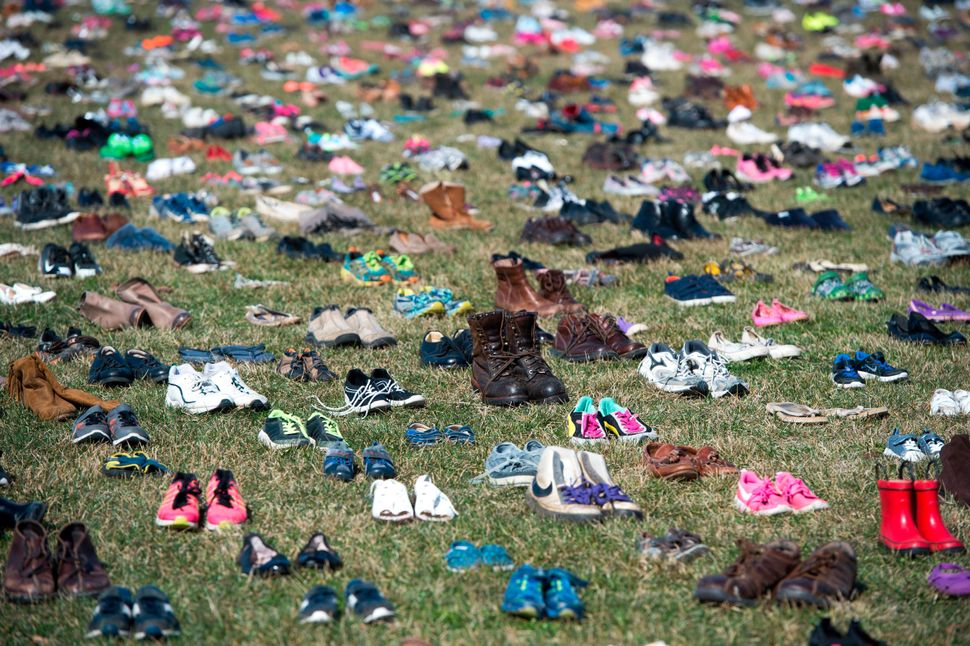 Yom HaShoah, the day on the Jewish calendar remembering victims of the Holocaust, falls in late April this year. But you would be forgiven for getting a little turned around in the last weeks, especially if you’ve spent any time online, where you may have seen #NeverAgain trending on Twitter. The slogan, a commitment that the genocide of the Holocaust would never again take place, has now been appropriated by the Parkland shooting’s survivors.

After the tragic massacre at their school left 17 dead, the students of Marjory Stoneman Douglas High School have been using “Never Again” as a rallying cry for gun control. #NeverAgain and #EnoughIsEnoug are just a few of the hashtags they have been using to identify their activism on social media.

Another gun control group recently employed Holocaust imagery in the course of their activism; lining up thousands of shoes on the lawn of the Capitol to symbolize all of the children killed by gun violence since the Sandy Hook shooting in 2012. It was an explicit reference to the most famous portion of the U.S. Holocaust Museum, a display of the shoes of those who were transported to a concentration camp and the only artifact left behind of the Jews who owned them.

Though I sympathize with the horror victims of gun violence have gone through, I feel this is miguided.

Since WWII, we’ve heard countless warnings not to compare world leaders with whom one might disagree to Hitler. There are few in subsequent world history who quite compare as leaders who have orchestrated mass murder at the hands of state agents: Pol Pot, Slobodon Milosevic, the Kims of North Korea.

Those with a healthy sense of historical frame of reference would not dare compare a political opponent or event to those of the Holocaust. The systematic murder of millions of Jews at the hands of a government was, thankfully, an anomalous event in human history.

What Nikolaus Cruz did when he killed 17 innocent victims in Parkland was atrocious. But is it really comparable to genocide?

These anti-gun activists haven’t come to their activism via an easy road: those involved from Marjory Stoneman Douglas and from the Capitol shoe protest have experienced a school shooting or lost a relative in one. Their desire for there never again to be an event like the one they or a loved one have experienced is a venerable one.

But employing the language of the Holocaust is not only deeply offensive and wrong, but also counter-productive if they wish to affect change.

For declaring your ideological foes Nazis has a way of silencing debate in a uniquely deafening way.

The Holocaust was a mass genocide perpetrated by the government. No Jew anywhere in Europe was safe from the threat of the gas chamber. These shootings, in contrast, are perpetrated by a few troubled and evil young men; it is not a grand conspiracy by the state to slaughter children. By comparing the deaths of students in schools at the hands of these attacks to those committed by Nazis, gun control supporters are in effect labeling their opponents Nazis.

And it poisons the gun debate to suggest that gun-owning Americans are tantamount to Nazis. As Rich Lowry writes, “The student activists presume that there is a ready solution to mass shootings that everyone knows, and the only reason why someone might not act on this universally accepted policy is malice or corruption. This makes the other side the equivalent of murderers.”

And yet, this is patently false. Ironically, supporters of the Second Amendment often cite the example of the Holocaust as the reason why citizens may feel the need to be able to defend themselves against a tyrannical government — with guns. For example, during the GOP primaries, candidate Ben Carson caused a firestorm by stating that fewer Jews would have been killed in the Holocaust had they been armed. And while his comments were deeply offensive and historically ignorant, they are an example of the way that gun-owners feel about why they need their guns. Gun-owners find it particularly perplexing when gun control advocates claim taking away their constitutional rights will make them safer, especially in the context of comparing the events in Parkland to the Holocaust.

Furhtermore, across the United States, Jews are taking up arms to protect synagogues against threats, and with good reason. In New Jersey in the last week, it was reported that thirty percent of bias incidents targeted Jewish individuals or institutions. In Lakewood a synagogue was defaced with swastikas for the second time in less than a year. At a gun range in northern New Jersey, the owner and instructors have told me how often they see men wearing kippot training in order to be more responsible gun owners and how often rabbis approach them to learn how they can conceal-carry at their synagogues.

They aren’t training to protect themselves from imaginary threats; but real ones that have claim lives in Israel and across Europe (especially France) every day, even in 2018.

The issue of gun violence in this country is undeniably a serious one, and requires serious and multifaceted solutions. In order to come to those solutions, both sides need to come to the table ready to engage in good faith debate.

The first step to holding good faith debate, however, is the presence of good faith in the other side. For those on the gun control side, dropping references to the Holocaust is an important step for achieving that.