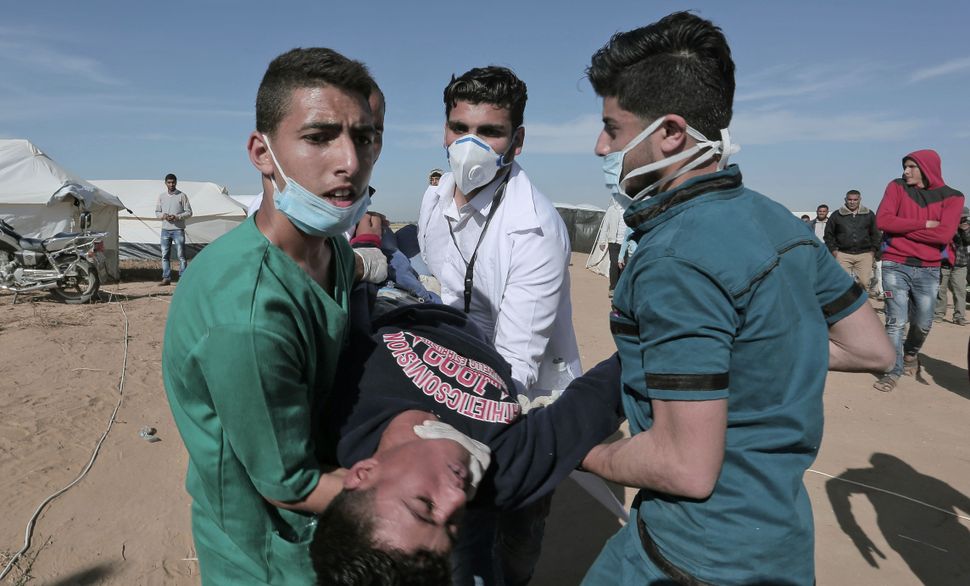 When Palestinians mass at Israel’s border, a specific nightmare of history always comes to mind. Before I tell you, I must tell you about a two-year-old boy named Eyal. The idea of him reminds me of my own little boy. In truth Eyal was born even before I was, and his photograph is far more reminiscent of me at his age. He has big ears, a giant smile, and a mop of auburn hair.

Eyal’s family lived in Kibbutz Misgav Am, a small community up in the far north of Israel, directly on the Lebanese border. It was that border that five well-armed members of the Arab Liberation Front slipped across at night under the cover of darkness. They took over the kibbutz’s baby nursery, killing kibbutz secretary Sammy Shani in the process. They barricaded themselves inside with a kibbutz member in his twenties and seven kids under the age of three as hostages. One of them was little Eyal.

Nearly 24 hours later, Major General Uzi Dayan led a Sayeret Matkal team into the nursery. The IDF commandos killed all five terrorists and freed the hostages. All except Eyal. He had been crying during the initial attack. The terrorists refused to let the kibbutz member console him. Instead one of them crushed Eyal’s head in with the butt of his Kalashnikov.

Eyal was murdered during Passover, on the 21st of Nissan. His 38th yahrzeit is on Friday.

On Friday Palestinians will again march on the Gaza-Israel border, and I will be forced to think of Eyal. I will worry about what could happen if Hamas or Islamic Jihad members manage to cross the border. Perhaps they will attempt to breach the fence, or perhaps they will exploit the chaos to attempt to cross through any extant tunnels or even underwater, as in a troubling incident four years ago. Israel has destroyed at least a few of their tunnels in recent months, but there is no guarantee that they have discovered all of them. I cannot help but fear the worst. I cannot help but think of Eyal.

While the Misgav Am attack occurred decades ago, there is no reason to assume Palestinian armed groups have undergone a moral awakening, especially those active in Gaza. The most recent polling by the Palestinian Center for Policy and Survey Research found that two-thirds of Gazans support a return to an armed intifada. Nearly half believe armed action would be the most effective means of establishing a Palestinian state alongside Israel. Most chilling, 71 percent of Gazans support armed attacks on civilians inside of Israel. (Overall, nearly half of Palestinians in the West Bank and Gaza support armed attacks on civilians inside of Israel.)

Moreover, as Israeli Supreme Court President Dorit Beinisch once wrote, “A democracy that ignores basic principles of human rights is liable to give terrorism the victory it seeks.”

In a similar vein, eminent Israeli legal scholars Yuval Shany, Amichai Cohen, and Eliav Lieblich wrote that the response to border demonstrations is foremost “a law enforcement challenge, which should be approached through non-lethal policing, and not through the use of lethal military force.” Live ammunition can be employed only as a last resort and only when there is a specific and concrete threat to life. They noted that even unauthorized crossing of the border into Israel does not in itself justify the use of lethal force.

The law governing the ongoing Israel-Gaza armed conflict is clear: those who are not members of Palestinian armed forces are to be considered civilians.

The distinction between civilians and military targets is a fundamental principle, including according to the IDF and Israeli law. This distinction between civilians and combatants must be made before a soldier opens fire at a target. It is insufficient to discover only after the fact that a targeted Palestinian was a member of Palestinian armed forces.

The targeting of civilians is prohibited — unless and for such time as they directly participate in hostilities. Precisely what does and does not constitute direct participation in hostilities is a debated question. But it is fairly clear that this standard requires an action that directly harms Israeli military assets or personnel.

Attending a demonstration, even a violent one, is not direct participation in hostilities against Israel. Neither is coming within 100 meters of the border fence.

Still, B’Tselem is not acting against the IDF or Israel by encouraging IDF soldiers to disobey certain illegal orders. In fact, Israeli law firmly forbids soldiers from obeying “manifestly illegal” orders. Such orders are characterized, as Israeli Justice Benjamin Halevy described half a century ago, by “unlawfulness piercing the eye and revolting the heart, be the eye not blind nor the heart stony and corrupt.” The Nuremberg defense of “I was only following orders!” is no defense to complicity in atrocities.

The suggestion of Likud party foreign affairs director Eli Hazan—that every individual among the tens of thousands of Palestinian protesters is a legitimate target simply for being part of a Hamas demonstration is the kind of blinded eye and stony corrupt heart Justice Halevy warned of.

Emotionally, I am afraid I understand Hazan’s sentiment. I cannot help but think of terror tunnels and Hamas frogmen and a murdered little boy named Eyal.

Yet I think too of the country Eyal was born into and the country the next generation will inherit.

“Justice should be called upon to shape and affect Might, rather than be constantly held as at worst irrelevant and at best subordinate to it,” said Prof. Pnina Lahav.

And as the Israeli high court concurred, “even under the roar of the cannons, the Military Commander must uphold the law. The strength of society in withstanding its enemies is based on its recognition that it is fighting for values that are worth defending. The rule of law is one of those values.”