Is Israel Justified In Shooting Protestors On Gaza Border? 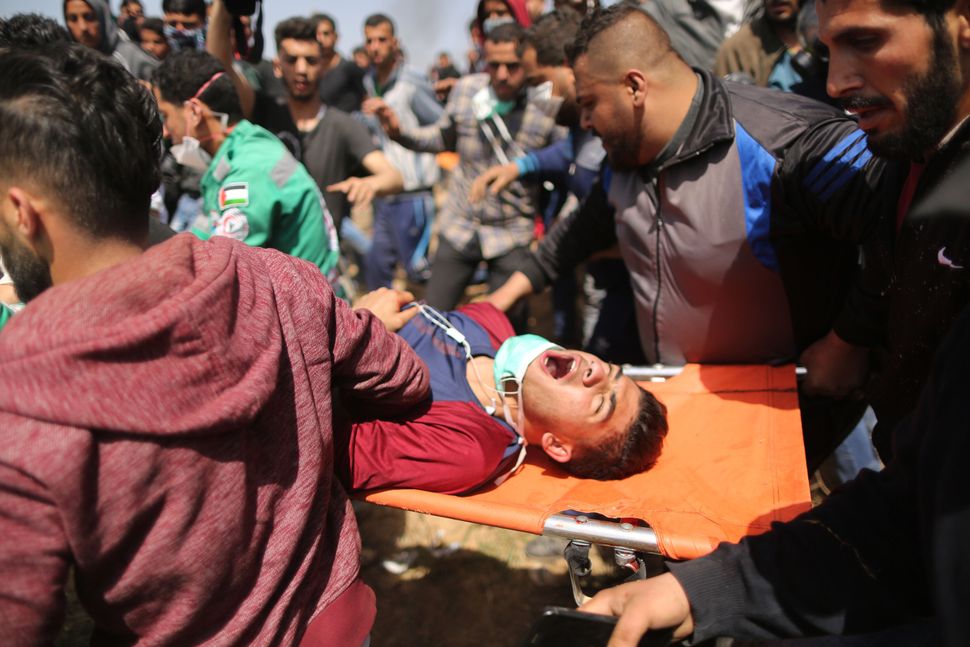 For the past six weeks, social media has been ablaze with the spectacle of thousands of Palestinians moving towards the border fence separating the Gaza Strip and Israel. Departing from six separate tent encampments built a few hundred meters from the border, the “Great Return March” has led to violent clashes, the loss of lives, thousands of injuries and very distressing images.

On Monday, May 14, 46 Palestinians were killed, bringing the total death count to 92 over the past six weeks.

Although the organizers of the Palestinian protests declared their intention to keep the marches non-violent, some protesters have tried to sabotage the border fence separating Israel from the Gaza Strip. They have also burned tires near the fence, and thrown stones and Molotov cocktails in the direction of Israeli soldiers. The IDF also broadcast images that showed that under the cover of riots near the fence, there have been several attempts by armed Palestinians to shoot at soldiers and to infiltrate Israeli territory.

The response of the IDF to the marches has been severe. Already before the first march, Israeli Defense Minister Lieberman published on social media a statement in Arabic, warning Gaza residents that whoever approaches the border fence would be placing his life at risk, and claiming that Hamas (the de facto government in Gaza, who has also been involved in the organization of the march) would bear responsibility for any subsequent loss of life.

Similarly, IDF spokespersons have declared that the army would not allow protestors to harm the border fence infrastructure, specifically noting that the IDF would take necessary measures against violent rioters and terrorists accompanying the marches.

Pursuant to this policy, large IDF forces were deployed on the Israeli side of the border ahead of the marches, and a variety of measures, including sniper fire, was employed against Palestinians who tried to reach and sabotage the fence, or were seen carrying weapons on the scene.

Beyond the important political, humanitarian and moral issues raised by the “Great Return March” and the IDF’s response, complicated legal issues also present themselves.

In a nutshell, two difficult questions of international law come up: First, whether the marches constitute part of an “armed conflict” between Israel and the Palestinians, and second, if they are part of the armed conflict, whether unarmed civilians participating in the marches fall under the definition of “civilians taking a direct part in hostilities” and therefore can be potentially targeted as irregular combatants by the IDF.

The legality of various response measures employed by Israel turns on the answers to these questions.

Outside an armed conflict situation, international law allows lethal force to be purposefully directed by security agents against individuals if and only if such individuals represent an imminent risk to the lives or body integrity of others. According to this standard, even if the Palestinian marches deteriorate into violent riots during which harm to property is caused – harm like sabotage of the border fence infrastructure — no lethal force can be purposefully directed against the rioters unless they constitute a clear and present danger to the lives of IDF soldiers or Israeli civilians, or if their violent action constitutes an integral part of a broader attack which creates such an imminent threat, for example, if the breach of the fence is part of the execution of a terror attack.

Now, it seems clear that Israel regards the marches as part of an armed conflict taking place in and around Gaza. This position appears to be premised primarily a number of facts. For starters, the marches are organized, at least in part, by members of Hamas, which has a long track record of sponsoring a variety of armed attacks against Israel, including rocket attacks, the digging of “terror tunnels” and attempts by armed militants to infiltrate into Israel. Furthermore, the border fence constitutes an important element of Israeli national security, and an attack against its infrastructure is an attack against a military target. Then there’s the high levels of violence some of the marchers have resorted to. Finally, there’s the real possibility that armed militants would exploit the marches to attack Israel under the cover of the surrounding riots.

Based on these premises, Israel has concluded that even unarmed civilians marching towards Israel are taking a direct part in hostilities and can, in principle, be targeted by lethal force, especially if they directly threaten the integrity of the border fence structures.

The treatment of the “Great Return March” as an act of war is, however, extremely problematic and does not represent, in my opinion, a correct reading of contemporary international law.

Even if it can be argued — and this is far from uncontroversial — that the situation in and around Gaza remains a situation of armed conflict, even in periods of hiatus between rounds of active combat, if Israel wishes to rely on the laws of armed conflict to justify the use of military force against marchers it would have to establish their “belligerent nexus” to the armed conflict. According to the highly influential International Committee of the Red Cross interpretive guidance document on direct participation in hostilities from 2009, in order to regard violent riots as having a belligerent nexus to an armed conflict, the violence must be specifically designed to support the military efforts of one party in the armed conflict.

And yet, the involvement of large numbers of unarmed civilians in these marches and their organization as mass civil protests do not sit easily with the proposition that they are an integral element of a military campaign undertaken against Israel, even though they may share that campaign’s political goals.

That said, if Israel can expose a plan or pattern of military operations executed by Palestinian militants under the cover of the civil riots, its ability to establish the “belligerent nexus” would be stronger.

Second, in order to establish that unarmed civilians are direct participants in ongoing hostilities, Israel would have to show, according to the 2009 guidance document, that they caused serious harm of a military nature that would constitute part of coordinated military operations. While harm to the border fence could no doubt be regarded as military in nature, the onus to identify a direct causal relationship between such harm and a broader military operation remains on Israel shoulders, on the basis of a review and analysis of the facts on the ground.

Thirdly, even if the marchers are civilians taking a direct part in hostilities, the 2009 guidance document insists that targeting them with lethal force would be unlawful if other, less harmful means of neutralizing them are available. What this means is that Israel may only use live ammunition against protestors approaching the fence if it can demonstrate that the marchers cannot be stopped from crossing the border fence through any less-lethal crowd control measures.

Under the law enforcement paradigm, the default manner of responding to violent riots, including riots in border areas, should involve methods of crowd control (such as tear gas, water cannons or rubber bullets) and not live ammunition. Only when the rioters present an imminent risk to life of limb can lethal force be resorted to, and even then, only if no less harmful means for neutralizing the risk is available. Note however that under this paradigm, Israel is entitled to take a variety of law enforcement measures, including detention, and multiple non-lethal alternatives, to protect its legitimate security interests, including the protection of the integrity of its borders.

Lethal force can be used against civilians participating in marches only as a matter of last resort and only against armed militants posing a threat to Israeli soldiers or civilians. The images that emerged over the past week and a half showing Israeli snipers targeting unarmed individuals retreating from the border fence back towards Gaza with lethal force, suggest, absent further explanation, an unlawful use of force.

In sum, despite the difficult security challenge created by the marches and the violent context in which they occur, the default regime governing the response should be that of a law enforcement operation, and any deviation from it ought to be specifically explained and justified by Israel.

Certainly, the limits imposed by international law do not make the work of Israeli security forces easier. Still, operating under such constraints may help Israel deescalate the tense situation on the ground and reduce, to some extent, local and international criticisms against Israel’s response to the marches.

This piece was originally published on April 7, and has been updated to reflect the ongoing protests.

Yuval Shany is the Hersch Lauterpacht Chair of Public International Law at the Hebrew University of Jerusalem and Vice President for Research at the Israel Democracy Institute.

Is Israel Justified In Shooting Protestors On Gaza Border?