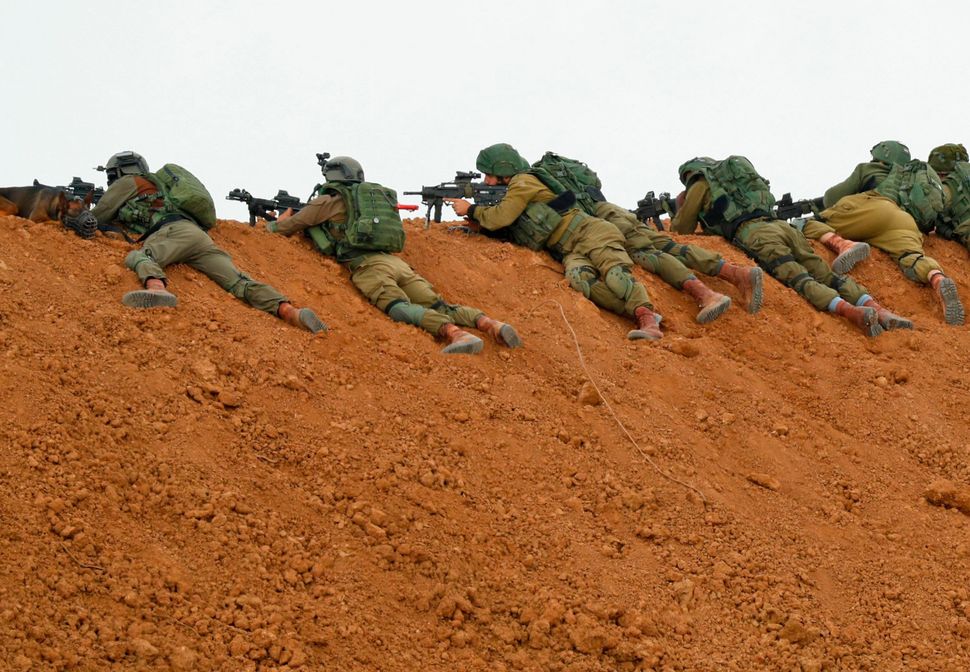 On Monday a two-minute video of an Israeli soldier shooting a Palestinian man in Gaza went viral.

In the video, you can hear the soldier receive an order to aim and shoot; then there is a loud “crack,” when he takes the shot, and as soon as he sees his target fall, he lets out a celebratory whoop.

“Yes!” screams the person recording the video [probably not the sniper]. “What a clip! Take that, you bastards. Of course I got it on film.”

For many Israelis, the sight and sound of soldiers celebrating a death was an uncomfortable one, particularly as it was distributed just three days after Israeli snipers shot eight Palestinian journalists — one fatally, in an incident that was widely reported in international media outlets. All the Palestinian journalists were wearing blue vests prominently labeled PRESS.

But on the Facebook page of Ynet, a widely read Israeli news portal, comments were mostly supportive towards the soldier. Many declared the clip “fake news.” Others wrote, “The only good terrorist is a dead terrorist.” And one commenter even found the clip inspiring. “It’s good that this was filmed and good to know that every shot has been carried out only under order, meaning our soldiers are adhering to the officer’s discipline and following his commands rather than doing whatever they want.”

The comments are deeply upsetting, not least because the victim of the sniper attack seems to be unarmed and not engaged in any particular activity, let alone a dangerous activity.

But even if the army could offer incontrovertible evidence to show that its targets were entirely legitimate and justified, how did Israeli society get to this point of cheering the death of a human being — particularly one who appears to be neither armed nor threatening?

The army, when asked to comment on the video, did not offer evidence of a threat.

In fact, the army defended the video. After claiming that it had been shot in December, not during last week’s protests as reported, the army defended the soldier’s use of live fire against an unarmed Palestinian, reserving its criticism for the person who had shot the video. “As for the unauthorized filming,” they IDF wrote in a statement, “it should be noted that these do not suit the degree of restraint expected of IDF soldiers and will be dealt by commanders accordingly.”

In Israel, the IDF spokesperson sets the discourse on these matters. One can see how the army’s attitude has affected public opinion regarding the protests in Gaza.

For weeks ahead of the first of the weekly “Great March of Return” Friday demonstrations in Gaza, which began on March 30, the army provided constant updates of the measures it was taking to prepare. In near-saturation coverage, the media reported daily on the military’s use of heavy machinery to fortify the security fence on Gaza’s perimeter and to block the tunnels underground. The IDF also announced it had deployed dozens of snipers and Special Forces to reinforce the already heavy military presence at the Gaza perimeter fence.

IDF Chief of Staff Gadi Eisenkot announced that he had instructed his soldiers to use “a lot of force” against the demonstrators, including live fire. All of this was reported on the nightly television news as a lead story all through the month of March, making it sound as though Israel was preparing to confront a serious military attack.

And while a handful of Israeli media outlets interviewed people in Gaza who insisted the demonstrations were a grassroots protest effort that was aimed at drawing world attention to Gaza’s desperate humanitarian situation, political and military analysts in Israel largely rejected this claim. Hamas, they said, was inciting civilians to provoke the Israeli army. Either they wanted a high civilian body count as a means of garnering international sympathy, or they planned to have armed operatives mingle with the civilian demonstrators to join in a mass surge against the fence with the goal of toppling it and infiltrating Israeli territory.

And Hamas lent credibility to these claims with a lot of fiery rhetoric, though reporters have not seen any evidence of militant or armed activity in the two demonstrations that have taken place so far, and not a single rocket has been launched into Israel in retaliation for the thirty Palestinian casualties.

The vast majority of Israelis support the IDF’s actions on the Gaza perimeter fence because they believe the army is looking out for their security, and that the demonstrators might ‘look’ unarmed, but in fact harbor violent impulses toward Israel.

The frightening image of armed Palestinian infiltrators sneaking into Israel to carry out terror attacks was augmented by a series of widely reported infiltrations from Gaza during the period leading up to the March 30 demonstration. Most of the cases involved unarmed individuals who were caught almost immediately and returned to Gaza the same day.

But on March 27, three men from southern Gaza managed to penetrate the fence and wander 20 kilometers into Israeli territory over a period of six hours. When security forces finally caught up with them, they discovered that the men were carrying knives and grenades.

This incident ratcheted up the fear among Israelis tremendously, with residents in the south of Israel telling reporters for the evening television news broadcasts that they were terrified of Palestinians committing attacks in their communities.

But the story of the three infiltrators was much more complex than initial reports made it out to be. The Hebrew-only digital news portal Walla! published a follow up on that incident that provided some sad context. The army spokesperson for the Southern Command told the reporter that the three men had come to Israel in search of work or, if that option was not possible, then at least a place in an Israeli jail, where they could be assured of three meals per day and a warm bed. The men were carrying weapons because they had heard that the IDF returned unarmed infiltrators to Gaza on the same day, most likely to an angry and unpleasant reception from Hamas security interrogators; but Israel routinely jailed armed infiltrators as political prisoners.

In other words, the men carried grenades to be sure that if they were caught, they would not be sent back to Gaza.

The army spokesperson told the reporter that there had been a spike in infiltrators since 2014, as a direct consequence of the dire humanitarian situation in Gaza, with almost no electricity, little clean drinking water, rampant poverty and unemployment that ran to 40 percent among the youth, who comprise 30 percent of the population.

But that little-read report in Walla! made no impact on the Israeli discourse. The overwhelming sense was that the people of Gaza were, in their entirety, a hostile entity determined to destroy Israel by any means possible.

To be sure, Israelis who live in Southern Israel have legitimate fears. They have been living for years with the Red Alert siren that indicates incoming Qassam rockets. According to the human rights NGO B’Tselem, 26 Israelis died from Palestinian rockets and mortar fire launched from Gaza between 2004 and 2014. Among Palestinians, 2,100 were killed by the Israeli army in 2014 alone. The asymmetry, however, understandably does nothing to calm the fears of Israelis who live on the Gaza perimeter. Anyone who has heard the haunting Red Alert siren and the disembodied voice on loudspeakers ordering citizens to seek shelter can understand that fear.

But these fears have too easily morphed into the dehumanization of the 2 million Palestinians living in Gaza.

It seems clear, after two consecutive demonstrations, that the so-called March of Return is a cry of desperation from the Palestinians of Gaza, with cynical Hamas operatives piggybacking by issuing their usual propaganda rhetoric even as hundreds of unarmed civilians, most apparently unaffiliated with Hamas, have been wounded and at least 30 killed.

The sad story reported by the Walla! journalist contributes to the picture of desperation in Gaza. But after a decade of total physical separation between Gaza and Israel, three wars and years of violent rhetoric emanating from both sides, the dehumanization has reached such a level that a 20 year-old Israeli sniper looking through his rifle scope at a Palestinian in Gaza does not see an unarmed human desperate for a better life. He sees a terrorist. A demon. And that is why he and his fellow soldiers cheered when his target on the other side of the fence fell to the ground.

The process of dehumanization comes to its full expression in the gleeful whoop of a 20 year-old Israeli soldier as he celebrates having successfully killed a nameless Palestinian man, probably around his age, who lives just beyond the fence.

Lisa Goldman is a contributing editor to +972 Magazine, which she co-founded. She lives in Montreal. Follow her on Twitter, @lisang.