Netanyahu’s Use And Abuse Of American Jews: A Review of ‘Bibi’ By Anshel Pfeffer 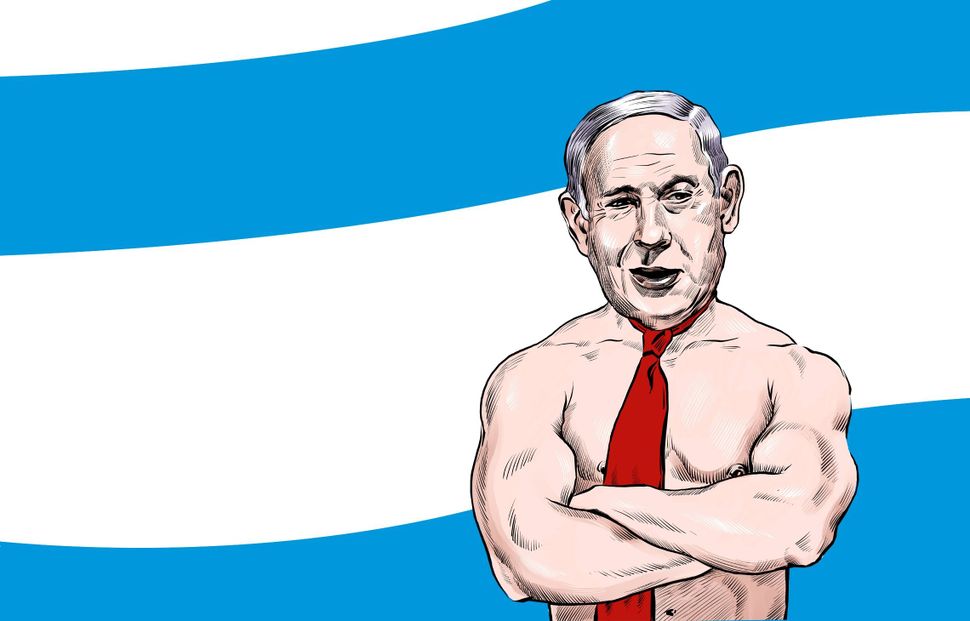 Early in “Bibi: The Turbulent Life and Times of Benjamin Netanyahu,” Anshel Pfeffer’s excellent biography of Israeli Prime Minister Benjamin Netanyahu, the author quotes an anecdote that Netanyahu likes to share. It’s about the time a mob of anti-Semites cornered Netanyahu’s grandfather in the old country. According to Netanyahu, as the group beat his grandfather with their clubs, he thought to himself: “The shame. The shame that a descendant of the Maccabees is lying here in the mud, helpless.”

The story has a happy ending. As Netanyahu’s grandfather lay bleeding, he promised himself that if he survived the night, “he would move with his family to the land of Israel and help to build a new future for the people of Israel in its land.” He did indeed survive the night, Netanyahu says, adding, “I am here today as prime minister of Israel due to the promise my grandfather made.”

The story is instructive, though not so much as a piece of history; Pfeffer (with whom I have corresponded on Twitter) notes that it may be apocryphal. Its significance lies, rather, in what it reveals about how Netanyahu sees the Diaspora.

Netanyahu portrays his grandfather not as angry with or scared of the ruffians who attacked him, but rather as ashamed of his own victimization. It’s shameful to be caught and beaten by a mob that hates you, shameful to be helpless. And it’s from the ashes of his grandfather’s victim-shaming self-loathing that Netanyahu rises, phoenixlike, as a New Jew to lead the people of Israel.

This fort-da dance with the Diaspora — drawing it close, in order to paint himself as its savior from its own loathsome tendencies — is one Netanyahu has sustained throughout his career. “He has a true disdain for progressive Jews,” a senior official in Barack Obama’s administration told Pfeffer. “He talks about stuff they like — high-tech and gay rights — but it’s clear he disrespects people who put their liberalism on a par with their Jewishness.”

This tension also informs Pfeffer’s biography in a more general sort of way. Netanyahu is just one year younger than the State of Israel, and Pfeffer tells his story as a synecdoche for the story of the Jewish state. Just as Israel has always had a complex relationship with the Diaspora, so, too, Bibi.

Pfeffer was never granted an interview with Netanyahu (“This is Mr. Pfeffer who’s writing a book about me,” Netanyahu once told the author’s editors at The Economist. “He doesn’t know anything about me. It will be a cartoon.”). Instead, Pfeffer seems to have chosen to portray Netanyahu’s ego as the main character of the biography, and he chronicles Netanyahu’s self-presentation, his glories and humiliations, as though they were the man himself.

This strategy makes up for the few moments when one might have wished to get a little closer, to hear, in Netanyahu’s own words, events that in Pfeffer’s telling must remain mysterious.

Netanyahu’s disdain for the Diaspora is not one of those areas. A columnist for Haaretz and The Economist, Pfeffer knows how to satisfy Israeli and non-Israeli readers simultaneously, and Netanyahu’s feelings about non-Israeli Jews are a topic on which Pfeffer is thorough.

The contempt was formed early. Netanyahu went to high school in America, where he and his brother Yoni — later killed in the Entebbe raid and memorialized as a hero — developed contempt for their soft and ditzy American counterparts, who lacked the gravitas of Israeli youth, not to mention the military service.

Netanyahu also developed a dual persona, one for Israel and one for the Diaspora, with two names — Benjamin Netanyahu versus Ben Nitay, the last name shortened because he grew sick of Americans butchering the four syllables. This ability to perform different selves came in handy years later, when he realized that the key to success was to look good on TV. Pfeffer notes how, as deputy chief of mission at the Israeli Embassy in Washington, Netanyahu, “worked assiduously on his televisual skills, taking lessons from professional coaches and spending weekends rehearsing at home… using hired video cameras.” He practiced everything from sound bites to leading anchors’ first names to “the mystery of male makeup,” and became a favorite of the American talk shows. (Larry King once said, “on a scale of 1 to 10 as a great guest, he is an 8. If he had a sense of humor, he’d be a 10.”)

But it was when he became ambassador to the United Nations in 1984 that he really developed his signature style. Netanyahu focused most of his efforts on his speeches, which he saw as “historic events,” according to one former diplomat at the mission: “The fact-checking that went into them, the testing out of every idiom and nuance, [was] painstaking and went on for days.” Yet he always gave the impression of an “off-the-cuff delivery.” It was then that Netanyahu developed his penchant for bringing visual aids to his talks.

In addition to capturing Netanyahu’s use and abuse of Diaspora Jews, the book’s most important contribution is its exploration of Netanyahu’s handling of the Palestinians, whose national aspirations and self-determination would become a virtual impossibility during Netanyahu’s tenure. This was deliberate, the work of a well-developed Weltanschauung: “Netanyahu has always maintained that the Palestinian issue is a diversion, not a central problem in the region. In the 1980s, Syria and the Soviet Union were the real issues. In the 1990s, it became Iraq, and since the beginning of the twenty-first century, he has focused on Iran.”

So, too, in his first White House meeting with Obama, in May 2009, Netanyahu “was dismayed to discover that Obama wasn’t interested in talking about Iran at any length. ” For Netanyahu, “the Palestinian issue was a distraction from the real threat, not just to Israel, but to the entire world. How could Obama expect Israel to waste time and resources on a local side-show and make dangerous concessions to the Palestinians while its very existence was being threatened by Iran?”

For Obama, of course, the exact opposite was true. The only way confronting Iran would succeed was if pursued through diplomacy, which required a solution to the Israeli-Palestinian conflict. For him, solving the conflict had to be Israel’s destiny.

We all know how that turned out. Netanyahu leveraged his popularity among hawkish American Jews and congressional Republicans to try to stop Obama’s Iran deal, and failed.

And yet, amazingly, as Pfeffer notes, Netanyahu’s colossal gaslighting of those concerned for Palestinians’ human rights ultimately worked: “Netanyahu has failed to convince the world that Israel was justified in keeping the settlements, but has succeeded in taking the settlements off the global agenda.” Netanyahu expanded Israel’s diplomacy to the Far East, “where leaders were especially eager to acquire Israeli technology and had little interest in the Palestinians.” But he found an ever-bigger coup in the incursions he made with Arab Sunni dictators from Egypt and Saudi Arabia, “who saw him as a partner both in their joint rivalry with the Shi’a Iran and as a useful ally to have when dealing with Trump’s Washington.”

Ironically, these successes have enabled the entrenchment of the occupation of the West Bank and the blockade against Gaza.

This tension, between opening to the Arab world and foreclosing on Palestinian human rights, lies at the heart of Netanyahu’s legacy. And yet, balancing contradictions — between nationalism and liberalism, openness and protectiveness, Old Jew and New Jew — is a Netanyahu family legacy. For three generations, the Netanyahus have staked their claim in the Revisionist Zionist camp of Ze’ev Jabotinsky, assuming Jabotinsky’s Hobbesian outlook, that nations who wish to survive must “keep apart, untrusting, perpetually on guard.” And though his elders remained obscure outsiders in the history of Zionism, ultimately their brand of Zionism seems to have won the day; “integrating Jewish nationalism and religious tradition is one of the dominant ideologies in Israel.” This is in no small part due to Netanyahu, who, though staunchly secular himself, has always used the ultra Orthodox parties and the religious Zionist settlement movement to his advantage.

With his willingness to mine the worst in humans to ensure his political longevity — who can forget the Facebook video of Netanyahu warning voters to get to the polls because the Arabs were voting “in droves” — and an ability to manipulate the press while simultaneously whining about unfavorable coverage, some readers might be reminded of President Trump. (Sara Netanyahu told Melania Trump when the first couple landed in Ben Gurion Airport: “We’re just like you. The media hate us but the people love us.”) As the Israeli politician Dan Meridor told Pfeffer, “Bibi isn’t a racist himself, but he is adept at using racism for political purposes.” It sounds eerily familiar.

But Pfeffer’s Netanyahu is a man driven by both political self-preservation and deeply held convictions. He inherited from his father “a deep disdain for what he sees as an inherent weakness in the Jewish character” — “Only a strong leader, capable of withstanding unbearable pressure to concede, can safeguard Jewish sovereignty for another generation.”

And though the Jewish state has existed for 70 years, much like Netanyahu himself, “its existence remains as precarious as that of the Hasmonean dynasty of Judea” in Netanyahu’s mind. One wrong turn and you’re lying in a puddle of mud after having been beaten up by a group of ruffians —- or on your way to the gas chambers.

This also means that Netanyahu sees threats to his leadership as threats to national security, a conflation that will only increase as his legal troubles close in on him.

On every page of “Bibi: The Turbulent Life and Times of Benjamin Netanyahu,” out May 1, one feels Pfeffer’s encyclopedic knowledge of his subject and his profound fairness in assessing Israel’s leader. For American Jews especially, the book pulls back the curtain on a man held in high esteem who holds us in contempt.

Netanyahu’s Use And Abuse Of American Jews: A Review of ‘Bibi’ By Anshel Pfeffer