I Was Pushed To The Back Of A Protest Because I’m A Zionist. Here’s What It Taught Me About Tribalism And Jews 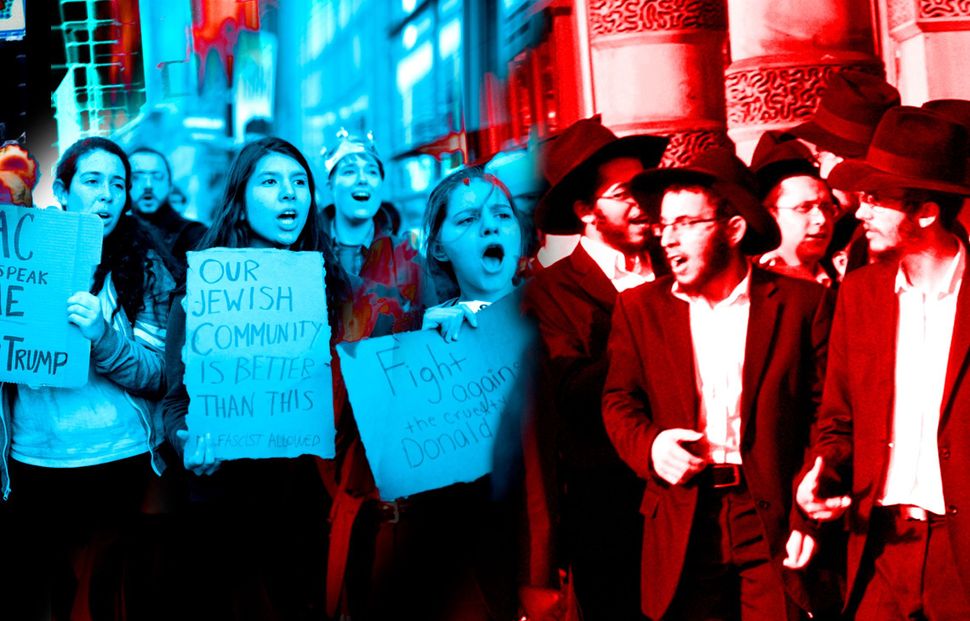 One evening in November, I found myself standing at the back of a crowd of protesters. It was a protest organized by IfNotNow, the Jewish anti-occupation group, to protest the Zionist Organization of America’s hosting of Steve Bannon at their annual gala. IfNotNow does “not take a unified stance on BDS, Zionism or the question of statehood.” But my sign read, “A proud Zionist Fighting Steve Bannon.”

So I was asked to stand in the back, along with the other members of the Orthodox activist group I came with, Torah Trumps Hate; because all of our signs declared that we are proud Zionists.

At the time, it didn’t bother me. All I cared about was that I was fighting Steve Bannon. I didn’t stop to think whether it was problematic.

Even now, thinking about it, all that comes back is my pride, pride that I was in that moment aligned with my fellow Jews in our opposition to Steve Bannon, progenitor of the “alt-right” platform Breitbart. We were united at the hypocrisy of the Jews who would celebrate him. I was proud not because I agree with their choice to push us to the back, but because there was something deeper happening, something stronger than my personal views, or our disagreements.

Looking back, I remember seeing that same realization in the eyes of fellow protestors when they looked at our little group of Zionists. Smiles formed, and some told us, “It’s so good to have you here.”

On another day, we may have been at separate protests; that day will no doubt come again. but on that day in November, we were united.

We were united to fight a very specific thing: the tribalism that had led to the success of Donald Trump. It was also tribalism that led the ZOA to allow Bannon to speak at their gala.

That is the danger of tribalism: fighting only for your own, at the expense of your integrity and your beliefs. To me, asking Steve Bannon to speak at a Zionist event represented all of that.

And yet, tribalism has an upside as well. Time and again, I have benefitted from Jewish tribalism, like the time my daughter cut her hand to the bone, and my family was enveloped by the warm embrace of frum Jews helping each other out. From Hatzalah, the volunteer emergency medical organization in our community, to the Satmar Hasidic woman who treated my daughter, the care and love with which they helped us could never match an ambulance, a hospital, or any other non-tribal service.

Tribalism, the feeling of kinship with people who are not your family but with whom you share values so deeply that they feel like bonds, constantly restores my faith in my people. When my daughter’s blood was pooled at the floor in my kitchen, it was the tribal bonds of those who came to our aid that helped her. When I could hardly function as I finally looked into the wound, it was the tribal bonds of frum Jews that supported me and helped her feel safe and strong.

When Hatzalah came to my home, they didn’t care whether I protested the ZOA. When we arrived at the Hasidic medical organization in Williamsburg, they put us at the front of the line, despite the fact that I was obviously more modern than the others in the waiting room, and not from the same community, and the only man there. They did this because my daughter was a Jew, and they were there for all Jews.

It was this ability to look past differences, to treat a Jew as a family member, that allowed me to look past being treated in a way that I also didn’t agree with at the ZOA protest.

And it’s what allowed IfNotNotw to even agree to protest with us in the first place — because there was an element of tribalism afoot at that protest, too. We were all Jews, angry and frustrated by our family, who decided to come together despite our differences. It’s why we could look at each other with light in our eyes even as we felt the tension, the discomfort, of our spiritual distance from each other.

Yes, in that moment at the ZOA gala, as I watched part of my tribe embrace a man I believe to be truly evil, I looked on in pride at the other part of my tribe who were brave enough to stand there and fight, even if they asked me to stand at the back.

The protest against the ZOA was a reminder that differences may exist between Jews, but ultimately, we are a tribe, and though one day, we may stand apart, another we come together. And that means that we are actually always standing together, even when we aren’t.

Standing at the back of that protest reminded me that the bonds of tribalism inhere among non-Orthodox Jews, too. And I don’t know if I would have realized that had I been standing at the front.

But being an Orthodox Jew affiliated with social justice movements has given me a perspective on both communities, and how the question of tribalism influences their differences.

On one side, we have the mostly-liberal, largely secular, Jewish world, the Jews who have a legacy of fighting for the causes that are larger than the Jewish world, like fighting for civil rights, for those less fortunate, for the survival of the planet.

The Pew Research Center has shown time and again that for these American liberal Jews, liberal values and social justice defines their Judaism. They are anti-tribal Jews.

On the other hand, you have the mostly-conservative, largely Orthodox, Jewish world, which consists of the Jews who have a legacy of fighting for the causes specific to the Jewish world: Fighting for Israel, fighting intermarriage. You might call these the tribal Jews.

What each side does not realize is how much they need each other.

The tribal Jews have fallen further and further away from their true Jewish values, because the more tribalism becomes a defining philosophy, the more physical safety and the continuation of the bloodline override things like our larger role in the world. If a person only cares about survival, he is no more than an animal fighting to claim his territory. So, too, with a tribe.

This is why we generally look on secular Jews as the ones who have affected mainstream society, because they have done so much for it, given so much to it. They have bled for it.

For the liberal, anti-tribal Jews, they see how their Judaism is larger than Jews.

But it is this commitment to Jewish values above Jewish tribe that weakens groups that represent this heritage like IfNotNow. It helps explain why, for example, so few of the bravest Jewish social justice organizations, who I march with in joy on a regular basis, were willing to release strong statements condemning Tamika Mallory and the Women’s March after she bragged about attending his hate speech.

Because these Jews are so deeply invested in transcending tribalism, they find it hard to rally when tribalism is called for.

It also explains why the numbers of the anti-tribal Jews are dwindling, why fewer and fewer Jews in each successive generation even care about the values that their parents and grandparents fought so hard to preserve.

Because, in truth, how many of them have had the experience of having their tribe come and care for them only because they are part of the tribe? It is that kind of unconditional love that can only exist in families or in the most tribal of tribes.

Anyone who has eaten at a Chabad house has had a glimmer of this experience. But there is nothing quite like living it deep within the heart of it all.

While liberal Jews are spending $50 million a year just to send their kids on a trip to Israel so that they may one day grow up and still care about being Jewish, the Orthodox world spends its money on services that help Jews in every aspect of their lives, from healthcare to safety. It is because of its anti-tribal identity that so much of the liberal Jewish organizational world is devoted to trying to create a semblance of tribalism. But the Orthodox world is tribal, and that is why it is growing astronomically compared to its counterparts.

Still, while the Orthodox world may appear to be thriving physically, it is dying spiritually. More Orthodox Jews than ever are learning Torah, and yet it seems that this learning mainly exists to reenforce tribalism, not to live out values that extend beyond the basic Jewish laws that we associate with a traditional Jewish life.

The poorest town in America is the Hasidic town of Kiryas Joel. Brooklyn’s Jews are the poorest Jews in America largely because of how many of them are Orthodox. This poverty stems from the fact that much of the educational system in these communities is entirely devoted to passing on Torah, rather than a secular education that would lead to independence from the vast structures designed to help Orthodox Jews – but that also keep them insulated and dependent.

It’s possible. In fact, it is what Judaism is meant to be: both steeped in tribalism and extended beyond it. Judaism’s tribalism exists as a vessel to bring its values, which transcend tribalism, into the world beyond.

But we are fractured. And until we come together, not just in space, but in spirituality, we will continue to remain broken, as each side of this divide dies its own unique death.

And because I am a Jew. And that is what we do.

I Was Pushed To The Back Of A Protest Because I’m A Zionist. Here’s What It Taught Me About Tribalism And Jews