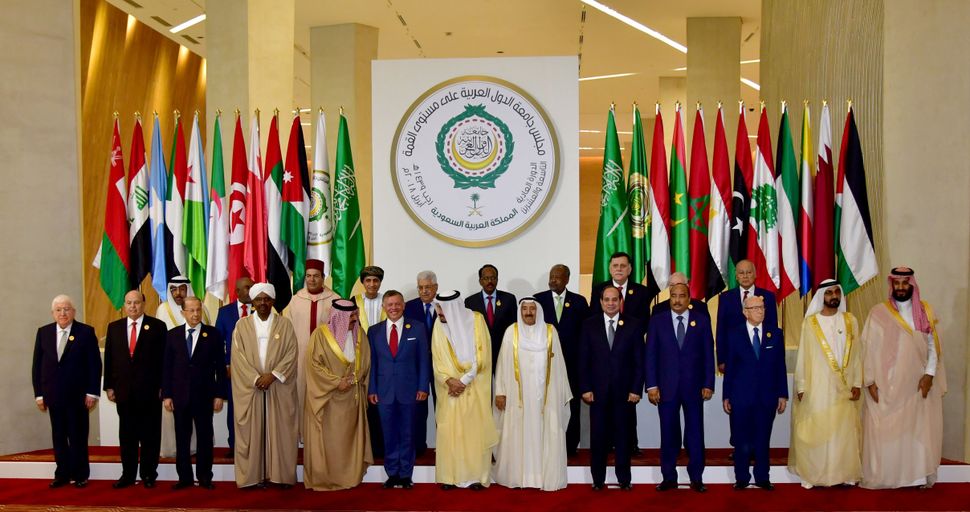 Much of the press coverage of this weekend’s Arab Summit in Saudi Arabia centered on the unanimous condemnation by Arab leaders of President Donald Trump’s decision to recognize Jerusalem as Israel’s capital. But overlooked by many is the fact that Arab leaders also quietly support his peace plan for the region, even though Palestinian leadership has loudly condemned that plan, whatever shape it may eventually take.

At a time of increasing instability across the Middle East fueled by terrorism, extremism and intractable conflicts in Syria, Iraq and Yemen, the Palestinian cause is perhaps the only regional issue that all Arab states can agree on.

And yet, despite Hamas’ long-standing objective to prevent a two-state solution, Trump’s “Arab coalition” — comprised of Saudi Arabia, the United Arab Emirates, Egypt and Jordan — appear committed to at least tacitly supporting his peace plan. Trump has isolated Abbas from his fellow Arab leaders, and the aging Palestinian president fears that he could be pushed out by Washington — with the tacit approval of Trump’s Arab coalition — and replaced by Mohammad Dahlan, the former leader of Fatah in Gaza, in the event that Abbas rejects Trump’s peace plan.

The introduction of Trump’s peace plan is expected to be linked to his domestic agenda, but given the present turmoil at the White House and the unpredictable state of U.S. politics in general, it is unclear whether there will ever be “a right time” for Trump’s disruptive approach towards the Israel/Palestinian issue.

What is clear, however, is that Trump’s aptitude for political theater has unnerved the Palestinians, which explains why Abbas once again rejected the U.S. peace plan at the Arab League Summit in Dhahran on Sunday even if no details have yet been released.

Saudi Arabia and its principal regional allies, the UAE and Egypt, increasingly see Iran and the crisis in Syria, much more than the Palestinian issue, as an existential threat.

Of course, political posturing in the public and private policy objectives are two very different things. King Salman of Saudi Arabia declared during his inaugural remarks, “The Palestinian issue will remain our top issue until all Palestinians get their legal right to establish an independent state with Jerusalem as its capital.”

But the Arab leaders, except for Palestinian President Mahmoud Abbas, were careful not to criticize U.S. President Donald Trump’s forthcoming peace plan.

The exact details of Trump’s peace plan have yet to be disclosed, but it is well understood in Washington policy circles, as well as in Ramallah and Jerusalem, that the timing of its release will be essential given that it will likely be presented as some sort of a political ultimatum meant to bring decades of failed peace negotiations to an end.

Adding to Palestinian anxiety is the fact that Trump has successfully maintained the alliance with Riyadh, Abu Dhabi and Cairo on issues pertaining to regional cooperation, including on the Israeli-Palestinian front, while narrowing differences with Jordan on the Jerusalem issue.

King Abdullah of Jordan, along with Abbas, were the two Arab leaders to initially publicly reject Trump’s Jerusalem announcement.

That Abdullah’s position on Trump’s peace plan has evolved was evident during the Dhahran summit, as he no longer criticized the Jerusalem issue but instead provided conciliatory rhetoric towards the Palestinian cause.

Complicating the matter is the return of Mohammad Dahlan to the Palestinian territories in October of last year — with UAE backing and financing — following a lengthy tenure in Abu Dhabi.

Fearing these developments, Hamas — which refuses to recognize Israel’s right to exist — has sought to escalate tensions with Israel by deploying tens of thousands of protestors to the Gaza-Israeli border every Friday with the strategic objective or sabotaging any prospects for peace talks to succeed.

The wild card, however, is whether Qatar — which remains isolated from its Arab neighbors but is close to Trump — will be able to contribute to his peace plan by seeking to defuse Hamas-Israel tensions.

All things considered, Sunday’s Arab Summit was not a hurdle for Trump’s quest to impose a peace plan on Israeli-Palestine, but a sign of just how persistent the regional alliance between the United States and its long-time Arab partners really is.

Sigurd Neubauer is a columnist and Middle East analyst based in Washington. Follow him on Twitter @SigiMideast.