A week before the Immigration and Customs Enforcement officer told him he was going to a detention facility, Armando, our synagogue’s custodian for two decades, had come in to work on President’s Day to be there for my family as we held a small service to celebrate my son’s upcoming bar mitzvah. Afterwards, as we ate lunch, Armando stood at a distance smiling. A week later, when I spoke to him in custody, he said through tears, “I have seen your son grow. I wanted to be there for the big celebration.”

My son, by happenstance of birth, is a United States citizen, and simply by reaching the age of 13 he becomes a full citizen of our religious community. Armando has worked and lived in this country more than twice as long as my son has been alive, has two boys of his own, no criminal record, steady employment and a community of hundreds of families who love him. Yet in an instant, he was taken away.

Like my son, I did absolutely nothing to earn or deserve my citizenship, it was gifted to me at birth because of a decision my great-grandparents made. I didn’t have to work for it, sacrifice for it, travel for it. It was given to me before I knew to dream of it, before I knew what dreams were. We enjoy tremendous privilege and access simply because we were born in the right place at the right time. Not so for Armando.

We got a call that Armando had been arrested over the weekend and was in the county jail. He was in a restaurant with family when a fight broke out. The police were called and they arrested a number of people, including Armando. Aside from being in the wrong place at the wrong time, he was completely exonerated in court. But during his time in the county jail, ICE was sent a list of inmates. An ICE officer came to the jail to let him know he was going to be brought into detention.

Armando came to this country nearly 30 years ago. In the 20 years he worked in our synagogue, he paid social security, Medicare, state and local taxes. As far as we were concerned he belonged in every way. But others apparently saw that differently.

As soon as Armando was in ICE custody, our community sprang into action. As a rabbi, it has been particularly moving to see my synagogue live out the value of chesed, or loving-kindness. Community members collected money, secured legal representation and wrote dozens of letters attesting to his character. We reached out to his family and assured them we would be there for them and would not let him be deported.

One family’s letter mentioned that Armando was a guest reader in their child’s preschool classes. Another parent talked about how Armando convinced her hesitant son to get out of the car and go inside for religious school. Then there was the parent who had a medical emergency and had to rush a child to the hospital with only time to ask the closest adult — Armando — if he would get her other son after class and stay with him.

I was so used to seeing Armando taking care of our families that I was a bit ashamed of how little thought I had given to him being a father to his own sons. I accompanied Armando’s son to visit his dad while he was being held at the county jail. Armando looked at his son and said “I don’t want you to stop your education. I want you to have what I didn’t.” I imagined the same conversation between my great-grandfather and my grandfather, just with a Yiddish accent.

The attorney we found worked quickly to put together a plea for a stay of deportation and get in touch with immigration authorities. He put together a character profile, but how do you characterize the look of embarrassment on Armando’s face when the synagogue staff brought out a cake and sang happy birthday to him? Or the way he made our kids feel at home when they high fived him in the hallways? Or the smile on his face when he would explain to people how often he brought his own son to synagogue? “He grew up here,” Armando would say.

The ICE officer, who the lawyer informed us had complete say over Armando’s fate, didn’t return the attorney’s call for days. A week after Armando entered ICE detention, I called the attorney to check in. “An hour ago, he was taken from the detention facility and is being moved,” the lawyer reported. “We don’t know where to. All they know is that he is in transit.” The only way Armando’s family knew any of this was because the attorney had reached out to ICE.

Later that day, Armando called his family from Tijuana, Mexico, his country of birth. He had been brought over the border and left without bank cards, cash, cell phone or ID. He was given no time to gather any belongings or to call his family to say goodbye. As Armando told his son, an ICE officer who escorted him with others to the border told the group, “You’ll all probably get kidnapped.” When I heard that, I thought about how carefully Armando cared for the families in our community and how unthinkable it would be for him to purposefully cause anyone discomfort or fear.

Earlier, when rhetoric around immigration was heating up and people born in Mexico were being referred to as drug dealers and rapists, I had stopped Armando in the hallway; I felt the need to apologize for the cruelty we in the United States had enabled. He shook his head and said, “I just don’t understand why people need to talk like that.”

If crossing a border to seek a better life is in and of itself such a crime, why would anyone need to characterize people like Armando as cruel and brutal? If anything, the exaggeration reveals how insufficiently transgressive it is to dream of a better life.

If anything is brutal, it’s the enforcement system itself. It is now built for speed and efficiency, for maximum action and minimum thought. When we don’t feel the need to understand a person’s story, it becomes much easier to taunt them with fears of being kidnapped. In fact, it becomes necessary, because if we all realized immigrants were human beings, who could sleep at night?

But didn’t he break the law by coming here? If we are a nation of laws then don’t we have to respect the law? Good people, people who love Armando have asked these questions. I think it’s important to make a distinction between procedural justice, the idea that the law should be applied equally, and substantive justice, the notion that law should produce good in the world. Right now we are applying the law strongly and across the board. But we also have to own the consequences of doing so. We are breaking up families that include U.S. citizens, depriving them of income and taking parents away from children. We are creating greater dependencies in our society and millions are vulnerable to this fate. Circumstances change. What begins with good intentions can end in cruelty. It is possible for a law to be both legal and cruel at the same time.

Like good parenting (don’t drink, but if you do I’ll come pick you up no questions asked) it is possible to send clear, mixed messages. A pathway to citizenship can be created for those who are here at the same time as laws for orderly entry are reaffirmed. We can apply the law equally and assure that it produces good in the world. We can reestablish the integrity of our communal body without losing our soul.

Now Armando’s absence weighs on me. Before February, every day rushing to a class, a meeting or a counseling session, I would catch Armando out of the corner of my eye and we would quickly smile and wave. Since he was taken, there have been moments where I thought I saw him and turned, but there was nobody there. A phenomenon even more painful for his sons.

After Armando was dropped off with nothing across the border he made his way to relatives. We didn’t hear anything from him for 24 hours. I finally got a text from his son saying his dad was ok. We have been in almost daily contact with the family since. His oldest son is incredibly positive, but I have talked to him enough to have built up trust. Through tears he will say that he just wants to get his dad back.

Recently, a delegation from my synagogue joined Armando’s son and flew down to San Diego to meet Armando in Tijuana. We wanted to be with him as he walked to the border to seek asylum. They told us that they did not have the “capacity,” and turned him away. We will try again soon. One thing is for sure: our community will not give up.

As I crossed back into the U.S. from Mexico, having left Armando behind, I handed over my passport to be scanned. For the first time I did so without pride. I was a citizen, but of what kind of country?

The irony is that in enforcing so callously the line between citizen and non-citizen, we don’t affirm, but actually cheapen, the meaning of citizenship. As citizens, we are all implicated in our country’s behavior. If human beings without our status can be treated, in our names, in such cruel and thoughtless ways, then of what value is our status?

The truth is that when Armando was taken, we didn’t just remove a father from his family and a member from a community, we deported a piece of our humanity as well.

The picture I can’t get out of my mind is of Armando and his son holding each other and saying goodbye through tears last week in Tijuauna. This past week I stood next to my son as he read from the Torah for the first time. Fathers have so many hopes for their sons.

I hope my son uses his unearned citizenship to make this country worthy again of people like Armando.

The ScribeOctober 15, 2018
The views and opinions expressed in this article are the author’s own and do not necessarily reflect those of the Forward. 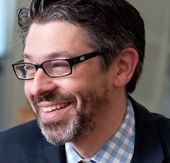 Rabbi Aaron Brusso serves Bet Torah in Mt. Kisco, NY. He is a member of the Executive Council of the Rabbinical Assembly and the Jewish Theological Seminary’s Chancellor’s Rabbinic Cabinet.