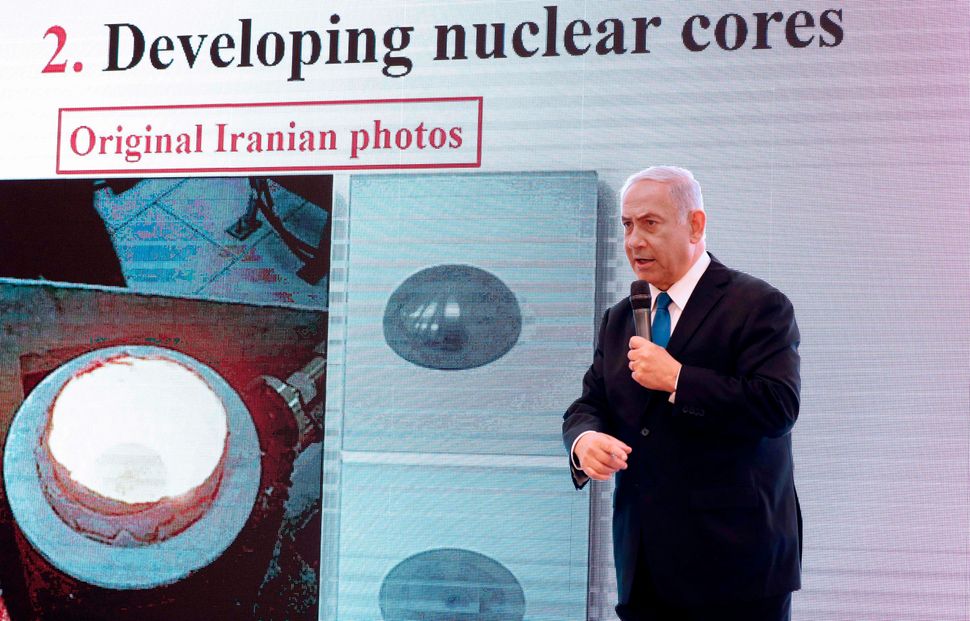 Make no mistake: the Iranian archives that Israeli Prime Minister Benjamin Netanyahu recently presented to the world are very important.

Maybe the information we have seen so far is not new, although there is a multitude of documents that we might still hear about. But it comes straight from the horse’s mouth. These are Iranian documents, which lay out their nuclear plans and activities in a very clear and unambiguous manner.

There’s no room for any doubt that Iran was working on a military nuclear program.

This is in contrast to the IAEA reports on Iran since 2011, when the special annex laying out Iran’s suspected military work was first included in the Agency’s open reports. These reports were couched in uncertainty.

Consider the name accorded by the International Atomic Energy Agency to the military file: “Possible Military Dimensions” or PMD of Iran’s nuclear program. The uncertainty persisted until the final IAEA report on the PMD was issued in December 2015, almost six months after the JCPOA was presented to the world. Only then did we finally learn, on the basis of only partial Iranian cooperation with the IAEA investigation, that Iran had worked on a military nuclear program until 2003, and continued this program in a less coordinated manner until at least 2009.

But the report was immediately shelved by the P5+1, and no action was taken on its basis.

Why is it important that we now have specifically Iranian documents? Because drawing on the element of doubt that was there for years, Iran has been very tightly holding on to a narrative of innocence in the nuclear realm, according to which it never worked on a military nuclear program, and has reaped important benefits. The Netanyahu revelations clearly undercut that narrative, in a more unambiguous manner even than the December 2015 IAEA report.

Iran knew what it was doing by insisting on its narrative of “nuclear innocence,” and was successful in getting the P5+1 negotiators to help it in its effort by acquiescing to Iran’s demand to leave past questions outside the frame of the talks. How else can one explain the bizarre fact that the PMD issue was not included in the nuclear negotiations, even though Iran’s suspected work on a military nuclear program was the raison d’être for the entire effort?

The investigation into the PMD suspicions was relegated to a parallel process with the IAEA that turned out not to be parallel at all. It was only initiated after the JCPOA was announced in July.

There have been additional dividends for Iran’s steadfast insistence. It was granted confidentiality rights in dealing with IAEA with regards to its future plans in the nuclear realm, because Iran rejected any notion that it be treated differently than any other “normal” member of the NPT. The argument against confidentiality rights — namely, that Iran had violated the NPT by working on a military nuclear program that it consistently lied about — was not part of the conversation because PMD were not granted entry to the talks. The steadfast Iranian narrative was crucial as a platform for insisting on not including missiles in the nuclear negotiations because they are, according to Iran, “non nuclear.”

Iran similarly abused its false narrative of innocence in order to base its demand not to accept “any place any time” inspections at military or other undeclared facilities in Iran. If Iran’s nuclear plans had been in the public domain in the way they are today — straight from Iran, in a multitude of documents — Congress would have had a much harder time justifying these major concessions to Iran.

The US foolishly ignored the implications of Iran’s narrative, and allowed this hateful regime to continue with its claim of innocence unhindered.

I will never forget my conversation with someone very close to the Obama administration in 2013 or 2014 on why the P5+1 powers were not insisting that Iran confront PMD evidence in any negotiation. He brushed off my concern with a condescending “We know what they did, why do we have to press them on it?”

The person that recognized the clear implications for the public debate over Iran even for a carefully worded PMD annex in the public IAEA reports was none other than former head of the IAEA Mohamed El Baradei, who blocked this from happening. The Intelligence regarding Iran’s military activities, which was finally published in the November 2011 report, was actually in the IAEA’s possession at least 4 years earlier, but El Baradei refused to include the information in his open reports. It was published only after El Baradei was replaced with Amano.

So in response to all those now clamoring in unison that everyone knew, that the information was out there, it would be advisable to remember the facts, and recognize that the situation was a bit more complicated.

The only problem with what Netanyahu revealed is that it wasn’t revealed 10 years ago. That could have made a real difference for any negotiation with Iran.

Today, with the JCPOA an established fact, the new information should be used as a platform for underscoring the crucial need for European states to agree to strengthen the dangerously flawed provisions in the JCPOA, especially regarding inspections and missiles that can carry a nuclear warhead. Moreover, clearly any justification for an unconditional sunset of the JCPOA provisions has been seriously undermined.

Emily Landau is a senior research fellow at INSS and head of the Arms Control and Regional Security Program.