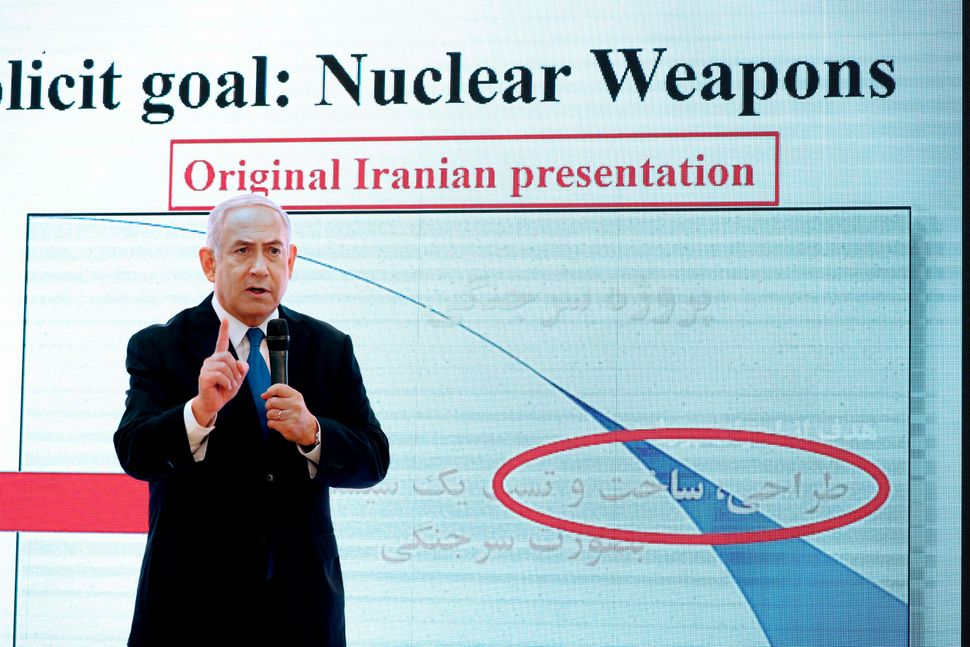 Israeli PM Netanyahu’s cartoonish presentation to the world on Monday of Iran’s stolen nuclear archive predictably aroused a broad spectrum of reaction. Much of the scorn heaped on the presentation is technically correct.

There was nothing really new here. There was no smoking gun of Iranian violation of the JCPOA nuclear deal. And this was in many ways, including visually, a presentation for the one-man audience of President Trump. As far as Netanyahu’s Israeli audience is concerned, he worked his media magic at a time when he needs to shore up his political “base” in anticipation of corruption indictments.

But the criticism, much of it from knowledgeable Israeli and global security circles, misses some of the less obvious yet very significant rationales behind the timing and content of what Netanyahu said. This was a one-two punch directed as much at Iran and Russia as at Trump.

The presentation followed by less than a day the destruction, deep in Syrian territory, of some 200 Iranian missiles stored in underground bunkers. The attack on the missiles, attributed to Israel, also apparently killed a number of Iranian al-Quds force soldiers. The Iranian missiles with their 750 kg. warheads and enhanced accuracy were almost certainly intended for attacking Israel from Syrian soil. Their destruction triggered an explosion that was recorded in Europe as a low-level earthquake.

Netanyahu in his Monday talk did not discuss the Syria attack, for which Israel has taken no credit. Yet it hovered in the air of the Defense Ministry auditorium where the prime minister spoke. The attack, after all, drove home to Iran the recognition that its enemy’s intelligence establishment was capable of knowing in real time where the missiles were stored and that its enemy’s security establishment was capable of penetrating the bunkers and destroying them. Iran’s deployment on Syrian soil has been deeply penetrated by Israel.

Then came the presentation of the Iranian nuclear archive. Forget for a moment the corny marketing of facts about Iran’s nuclear lies that the international community has known about for a decade and that in fact motivated it to negotiate the JCPOA. Forget, too, the interesting question whether Netanyahu’s performance was meant to reinforce a Trump decision to scrap the JCPOA or rather to persuade Trump to overcome his new inclination, primed by France’s Macron and Germany’s Merkel, to stick with the deal and somehow improve on it. Indeed, one could argue that by demonstrating how close Iran was in the past to a nuclear weapons breakthrough, Netanyahu merely pointed to the nuclear crisis that Iran will generate the moment it is freed from the JCPOA restrictions it has meticulously obeyed. Rather, the point was that Israel had made off with half a ton of a top secret digital and paper archive from the heart of Tehran, under the noses of an Iranian security establishment that is paranoid about Israeli spying. Not only is Iran’s presence in Syria deeply penetrated by Israel, but so is Iran’s nuclear infrastructure.

And not only does Iran now know this, but so do Iran’s Russian allies in Syria and so do the Sunni Arab countries that share Israel’s concerns about Iranian nuclear and territorial designs. Further, judging by Netanyahu’s contacts with President Trump and Secretary of State Pompeo immediately prior to the attack in Syria, the attack and the presentation reflect close US-Israeli coordination.

Official Iran quickly deleted its initial on-line acknowledgement regarding the scope of its human losses in the Syria attack. Likewise, it may deny either the authenticity or the importance of the document heist. But I would argue that the one-two punch of the Syria attack and the nuclear revelations served an important strategic purpose for Israel that goes beyond Trump and politics: deterrence.

Unless Israel can persuade Iran to back off militarily, the two are on a slippery slope toward heavy military confrontation in Syria and possibly Lebanon as well. The escalatory possibilities include a missile war across 1500 km of airspace, accidental collateral damage to Syria-based Russian forces and a Russia-Israel confrontation reminiscent of Cold War days in the Middle East. Efforts thus far, by Russia and others, to broker an Iran-Israel understanding regarding Syria have obviously failed.

The Israeli security community is fully justified in taking Iran’s threats and its capabilities seriously. The attack on Iranian missiles in Syria and the heist of its nuclear archive in Tehran are equally justified by Israel’s most existential security interests. Note that Israel’s existence is no longer threatened by Arab countries—only Islamist movements and Iran.

If this week’s one-two punch successfully strengthened Israel’s deterrence vis-à-vis Tehran, and if Iran is beginning to get the message, we can all forgive Bibi’s theatrics.