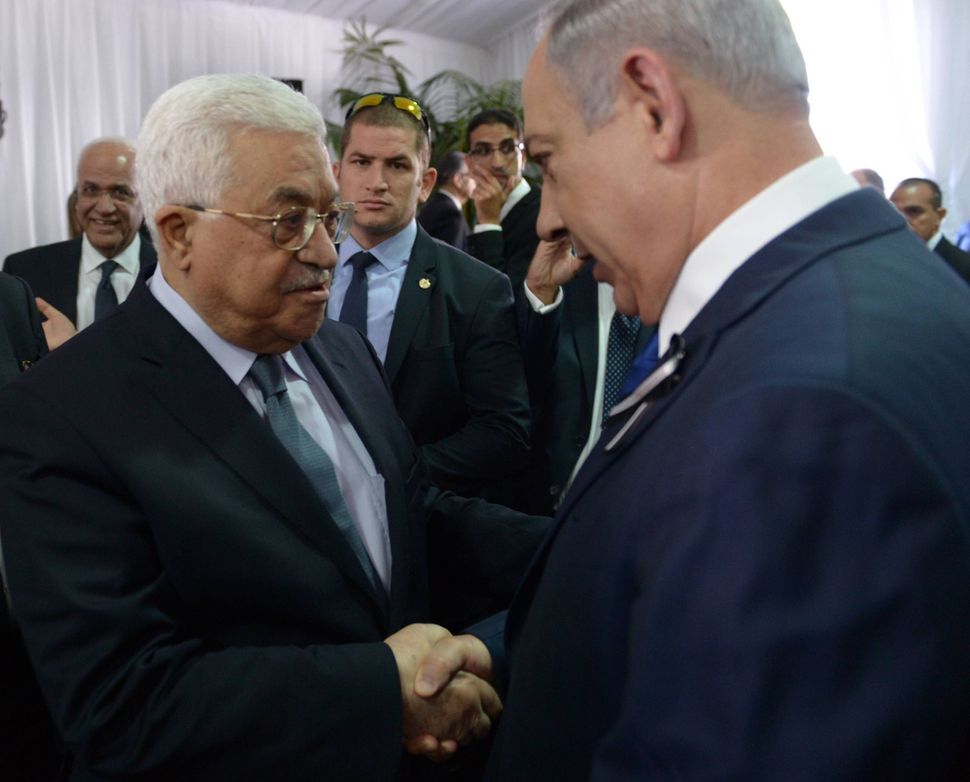 Palestinian Authority President, Mahmoud Abbas, delivered a disgusting, virulently anti-Semitic speech this week in which he blamed the Holocaust on the “social behavior” and financial dealings of Germany’s Jews.

Abbas was appropriately and roundly criticized by American Jewish leaders and Israeli politicians, with the most vociferous castigation coming from Binyamin Netanyahu, who called upon the international community “to condemn his severe anti-Semitism.”

The Palestinian president again recited the most contemptible anti-Semitic canards. Apparently the Holocaust denier is still a Holocaust denier. I call on the international community to condemn his severe anti-Semitism; the time has come for it to pass from the world.

I couldn’t agree more with such a condemnation.

However, the hypocrisy of Netanyahu’s castigation bears highlighting, for Netanyahu has recently engaged in the same kinds of behaviors as some of the world’s most virulent anti-Semites.

If you’ve ever been personally targeted by Jew haters, as I have regularly on social media since Donald Trump took office, you know that among their most common (non-violent) behaviors, they enjoy: celebrating anti-Semitic leaders, conflating all Jews with Israel, questioning Jews’ allegiance to their home country, and attacking Jews for being internationally-funded or “globalists.”

These are all things Netanyahu, too, has done.

The only thing more astonishing than Orban’s overt anti-Semitism and bigotry, however, was Netanyahu’s effusive congratulations coupled with an invitation to visit Israel.

What could possibly explain such behavior?

The answer becomes clear upon examining Netanyahu’s visit to Hungary in 2016. See, Budapest has given Israel diplomatic cover repeatedly at the United Nations from resolutions Netanyahu considers anti-Israel, a fact he acknowledged in an address to Orban that’s chilling in its irony:

“You’ve done that time and again. We appreciate this stance, not only because it’s standing with Israel, but it’s also standing with the truth … there is a new anti-Semitism that is expressed in anti-Zionism, that is delegitimizing the one and only Jewish state. Hungary is at the forefront of the states that are opposed to this anti-Jewish policy, and I welcome it.”

What this speech signals is that if a particular government makes (so-called) “pro-Israel” or “pro-Zionist” decisions, it’s de facto ‘pro-Jewish’ in Netanyahu’s world, even if that country’s government harbors actual anti-Semites who hate Jews.

After all, for Netanyahu, to be pro-Israel or pro-Zionist is to be pro-Jewish.

This category error relates to another habit Netanyahu shares with anti-Semites: a habit of conflating all Jews and the State of Israel. The only way a U.N. resolution Netanyahu abhors can be seen as “anti-Jewish” is to view Israel and Jews as one and the same.

This is a sentiment Netanyahu has explicitly championed over the years. Since 2015, he has on more than one occasion cast himself as not just Israel’s leader, but as representing “the entire Jewish people.”

It’s a notion which isn’t just false, but dangerous as well. In response to my Trump critiques in 2016, many anti-Semites suggested I stick to worrying about “my” country, meaning Israel, despite me being an American citizen. This is a common tactic of Jew haters: conflating Israel and all Jews together, giving them an occasion to target any Jew should Israel be deserving of rebuke.

Yet it’s a conflation Netanyahu has a history of making in order to cast critiques of Israel as anti-Jewish, despite the danger such a conflation poses for Jews like me.

Additionally, Netanyahu has for years been questioning Jews’ allegiance to their home country (in this case, Israel) due to their political beliefs and funding sources. Whether it’s politicians like Tzipy Livny or organizations such as Breaking the Silence, Netanyahu has repeatedly cast those Israeli Jews who stand to his political left as traitors. He’s done so during election campaigns, during efforts to ban progressive political organizations run by Israeli Jews, and most recently, in promoting a conspiracy theory that the New Israel Fund scuttled a plan to resettle asylum seekers in Rwanda, going so far as to state that the left-wing NGO “endangers the security and future of the State of Israel as the nation-state of the Jewish people.”

Add to this Netanyahu’s promotion of legislation which would punish (and even bar) left-wing Jewish organizations from receiving international funding, and there are unsettling parallels between Netanyahu’s attacks on progressive Jews and those routinely used by anti-Semites themselves.

When President Trump last month called outgoing economic advisor Gary Cohn a “globalist,” he was playing off a classic anti-Semitic trope that casts Jews as loyal to some international, tribal cause, and thus disloyal to their home country. It’s a charge I received countless times during the 2016 presidential election as anti-Semites questioned my patriotism and my allegiances due to my Jewishness, using politics as the occasion.

Now, are Netanyahu’s attacks against Israeli Jews in any way comparable to those inspired by The Protocols of the Elders of Zion? Absolutely not. However, Netanyahu has lobbed charges at Israeli Jews and the NGOs they run which are truly chilling, casting them as disloyal, as beholden to international funding, as suspect. And without a hint of irony, he’s done so in the name of protecting Israel “as the nation-state of the Jewish people.”

To be abundantly clear, I am not arguing that Netanyahu is an anti-Semite; such a charge is just as absurd as those who cast progressive Jews as anti-Semitic or self-hating for critiquing Israel or supporting equal rights for Palestinians.

My point is this: if we truly care about fighting anti-Semitism and hate in the world, Netanyahu’s embrace of anti-Semitic tropes and leaders, from Orban to Trump, must be vociferously condemned, regardless of whether or not the ironic motivation is to protect Israel or its interests. Otherwise, anti-Semitism merely becomes a legitimate tool.

And yet, there has been a deafening silence on the part of American Jewish leaders to call out this behavior for what it is.

Netanyahu’s embrace of anti-Semitic leaders and tropes would have been roundly condemned by American Jewish leaders and organizations had they been conducted by anyone else. The largely absent response from most mainstream organizations reveals a disturbing reality which has been festering for quite some time: the alignment of right-wing Zionism and fascism – even anti-Semitism – is sometimes quietly tolerated by far too many Jewish leaders so long as it’s viewed as “pro-Israel.”

This is perhaps why an organization such as the Anti-Defamation League (ADL), whose mission is to fight anti-Semitism and bigotry, has been boldly calling out Islamophobia and anti-Semitism with regularity during the past several weeks while saying not one word about Netanyahu’s disturbing embrace of an anti-Semitic leader.

While I cannot say for sure why the ADL would remain silent, it’s hard not to conclude that even for an organization dedicated to fighting bigotry, as with so many other American Jewish organizations, hate is sometimes tolerated so long as Israel’s geo-political goals are being furthered.

Unfortunately, such a view is exceedingly narrow. Any alignment with fascism or hate, regardless of perceived short-term political benefits, will only harm Israel in the end. It’s a reality we’re seeing as Israeli democracy erodes and the oppression of Palestinians grows. Partnering with anti-Semites and borrowing from hateful tropes will not, in the end, help Israel, nor Jews or anyone else. Hate only breeds harm, often disturbing and deadly.

It’s something Jews recognize all too well. However, what we don’t always seem to recognize is this: pro-Israel and pro-Jewish are not always the same thing. Sometimes, they stand diametrically opposed to each other. Which is why noted Jew hater, G.K. Chesterton, was able to say with a straight face, “I’m not an anti-Semite, I’m a Zionist.”

For some, Chesterton’s having been a “Zionist” is enough. Why? Israel is looked upon by many diaspora Jews as the safe haven to which escape will be possible once they come to get us, as history has taught will inevitably happen. As a people, we suffer from legitimate fears of annihilation and extermination. We have every right to be skittish.

But if such fears inspire us to tolerate the very hatreds that have destroyed us in the past, if such fears inspire us to remain silent as Israel’s leaders congratulate anti-Semites and flirt with fascist ideals, then how are we to truly combat hate as anti-Semitic incidents increase in the world? How are we to stem the tides from without if we’re not fully able to stem the tides from within?

David Harris-Gershon is the author of What Do You Buy the Children of the Terrorist Who Tried to Kill Your Wife? He’s a contributor for Tikkun, and his work has appeared in The Jerusalem Post, Haaretz, Pittsburgh Post-Gazette and elsewhere. You can follow him on Twitter @David_EHG.