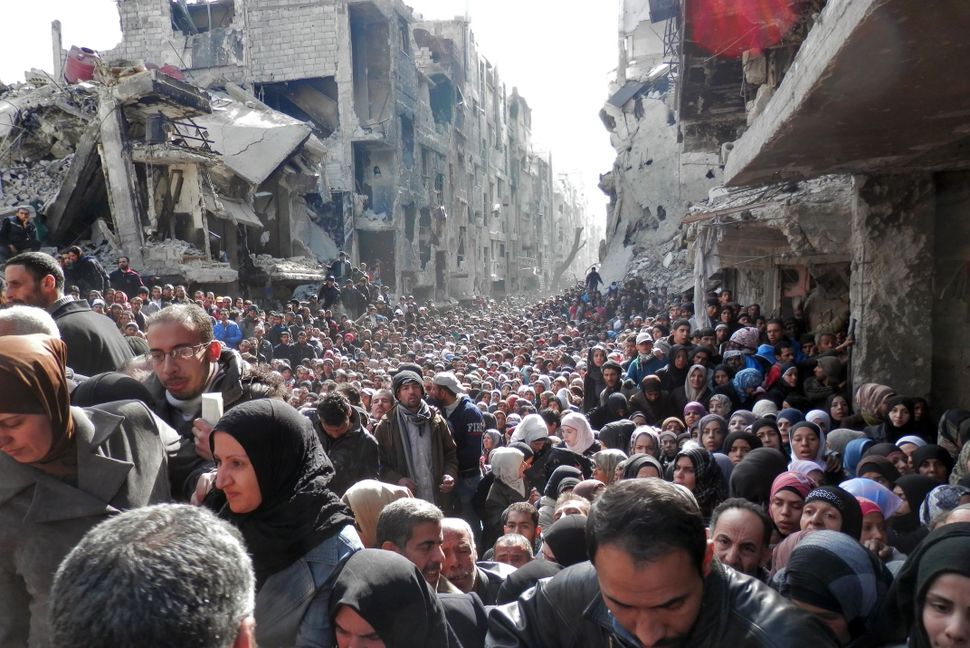 For the past two weeks, horrifying images of Palestinians being murdered have surfaced on social media. Jets have dropped bombs, sending flames and black smoke into the air, followed by helicopters dropping improvised and unguided barrel bombs. On the ground, in the besieged Palestinian camp, buildings collapsed burying civilians alive underneath them.

Those who have attempted to flee the camp have been arrested. No food or medicine has been allowed into the camp since July 2013. About 200 residents have starved to death or died due to lack of medicine. The airstrikes and shelling have not stopped for two weeks, preventing rescuers from retrieving the rotting corpses.

And yet, despite these horrors, no significant protests took place anywhere in the West or Arab world. The traditional champions of the Palestinian cause — those same people who have protested Israeli attacks on Gaza — have remained silent as the Palestinian Yarmouk refugee camp near Damascus in Syria was shelled by Russian and Syrian air forces, while militias loyal to the Assad regime enforced a brutal siege.

It’s a glaring double-standard: When Palestinians in Gaza endure Israeli airstrikes and a decade-long blockade, their suffering galvanizes mass protests in Western capitals. When Palestinians in Syria and Syrians are being bombed and starved, the anti-Imperialist Left either goes silent, or even worse, stands on the side of the oppressor.

“There are no ‘Pro-Palestine’ people. They don’t exist,” a Palestinian Syrian from Daraa, whose family was displaced from Haifa during the 1948 war, told me. “We Palestinians of Syria have been killed, tortured, bombed, and displaced by the Assad regime and we’ve had no support from the so-called ‘pro-Palestine activists’ whatsoever,” he said. “We happen to be the wrong Palestinians!”

The civil war in Syria decimated the Syrian-Palestinian community. The Assad regime and allied militias destroyed most of the Palestinian refugee camps in the country and laid siege to several of them. According to statistics compiled by the Action Group for Palestinians of Syria, at least 3,708 Palestinians have been killed throughout the war, and 1,673 are held in Assad regime detention facilities. 477 Palestinian-Syrians have been tortured to death in those facilities since 2011.

And yet, somehow, neither these statistics, nor the shocking images of emaciated Palestinians in the Yarmouk camp, led to mass mobilization of the Western “pro-Palestine” Left.

The end of the siege of the Yarmouk camp is close at hand. In April, the Syrian Army and allied militias launched an assault on the Yarmouk camp, now under the control of ISIS, utilizing indiscriminate weapons such as barrel bombs thrown out of helicopters and surface-to-surface “elephant” rockets. The operation has caused massive destruction to civilian homes and infrastructure and destroyed the last functioning hospital in the camp.

The regime continues to restrict the entry of aid into Babila, the nearby rebel-held town to which civilians from Yarmouk previously fled. Palestinians who fled to Babila are thus forced to sleep in the streets and beg for medicine from residents of a town that has been under a partial regime blockade for years. 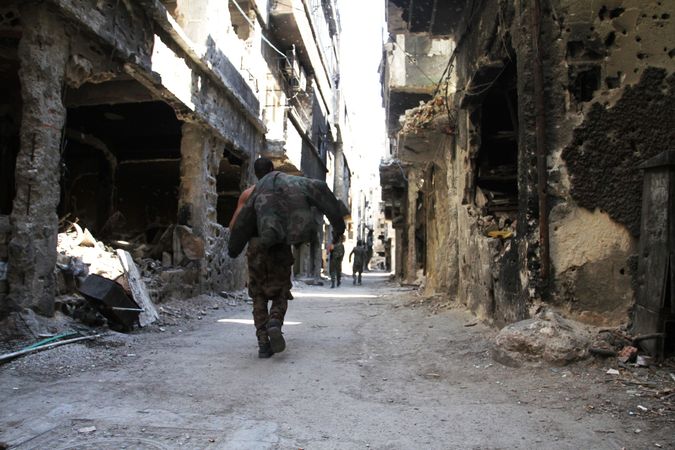 Men walk past destroyed buildings in the Yarmouk Palestinian refugee camp in the Syrian capital Damascus on April 6, 2015. Image by Getty Images

Why is the “Pro-Palestine” Left silent about this? How did the anti-imperialist and anti-war Left lose so much of its credibility in Syria?

Worse, it has aligned itself with Russia. The leader of the U.S. Green Party, Jill Stein, for example, attended a conference in Moscow organized by Russia Today and has adopted conspiracy theories about the war in Syria and the Russian invasion of the Ukraine.

Responsibility for chemical attack in Syria as yet unconfirmed. No matter who is responsible, US retaliation without UN/Congress approval violates international law, US Constitution, War Powers Act, escalates cycle of violence, & risks nuclear confrontation. #NoMoreWar

And the Deputy Chair of the UK-based Stop the War Coalition, which is quick to protest any Western action against Assad’s chemical weapons facilities, explained that protesting against Russian war crimes in Syria would “contribute to increasing the hysteria and the jingoism that is being whipped up at the minute to go against Russia” by politicians and the media.

Why has the Left aligned itself with Russia, a country engaged in a military intervention in further its influence in the Middle East, an intervention that resulted in the death of thousands of Syrian civilians?

During the Cold War, the Arab and Western Far-Left became accustomed to defending Communist and socialist regimes that perpetrated mass atrocities, including the starvation of millions in the Ukraine and “the Great Terror” under Stalin’s rule, persecution of homosexuals in Cuba and the disastrous “Great Leap Forward” of the Chinese regime. The collapse of the Soviet Union and repeated failure to establish successful socialist or communist models, reduced the Far-Left to a reactionary mode, embracing actors based on whether they were opposed to U.S. and “Imperialist” interest. The nature of the “anti-Imperialist” actors does not appear to matter, whether they were the genocidal right-wing Milosevic regime in Serbia, or repressive Islamist militias such as Hamas and Hezbollah.

The uprising in Syria posed a dilemma to the Western and Arab Left: the Assad regime presents itself as “anti-imperialist” force and aligned itself with the “Resistance Axis” of Iran and Hezbollah. But the initial peaceful uprising was overwhelmingly led by the working class and stemmed, in large part, from the regime’s neo-liberal reforms that increased inequality in Syria. Leftist parties and groups adopted varying positions on Syria, but as the opposition radicalized, Leftist groups, such as the Communist Party USA and Socialist Action, increasingly sided with the regime or the Syrian affiliate of the leftist Kurdish militant group that operates in Turkey, the PKK.

As Russia under Putin became increasingly antagonistic toward the West, many on the Left aligned themselves with Russia and became direct beneficiaries of Moscow’s growing influence operation in the West, spearheaded by Russia Today (RT) and Sputnik News, which are happy to host and employ members of the far-left and far-right and conspiracy theorists of all shades.

These channels, and other lesser-known Kremlin-run Internet outlets such as In The Now and Redfish spread misinformation on behalf of the Kremlin and their content is in turn amplified by Russian bots and members of the far-left and far-right on social media.

High on the agenda of Russia’s misinformation operation is the ongoing war in Syria. Russia has provided diplomatic, financial and military assistance to the Assad regime, a long-time ally, since the start of the uprising in 2011. Russia’s military intervened in the war directly in September 2015, tilting the balance of power in the war in favor of the Damascus regime. Russian jets have bombed tent camps of displaced civilians, markets and hospitals and deployed incendiary munitions and cluster bombs on densely populated area, in violation of international law. Kremlin outlets do not report on these crimes. Instead, they seek to sow confusion and undermine the credibility of Syrians documenting these crimes.

A case in point is the recent misinformation campaign regarding the chemical attack in Douma. Previous reports of the UN’s chemical weapons watchdog, the OPCW, found that the Assad regime has repeatedly targeted rebel-held communities in Syria with sarin and chlorine gas. Any reasonable person would reject the claim promoted by Russia that it is the rebels who keep gassing themselves, their neighbors and relatives, as part of “false flag” operations.

Hours after the attack, the third largest rebel groups in Syria, the Islam Army, agreed to surrender Douma to the regime following five years of siege. Thousands of Islam Army fighters, their relatives and opposition activists, were forcibly displaced from the city to rebel-held northern Syria. Medical personnel still in Douma and those who have been displaced told me, the Washington Post, the Guardian and Bild, that doctors and nurses who stayed behind faced an intimidation campaign from the regime and the Russian military, coercing them to appear on RT, Sputnik and regime television and assert that no chemical attack took place. A few days later, Russia claimed to have uncovered a chemical weapons lab of the rebels in Douma. Assad regime officials have also maintained that the attack did not happen and at the same time, that the rebels carried out the attack.

The conspiracy theories promoted by Russian outlets do not need to be particularly believable to serve their purpose. The ambiguity that Russian and Assad regime misinformation injects into the discourse provides a way out for individuals who do not want to appear to be siding with a murderous dictatorship but at the same time inclined to support any “anti-imperialist” force. This misinformation allows Far-Leftists to argue that the situation is complicated, unclear and that all sides deserve condemnation.

Thus, during a recent interview, the head of Israel’s Communist Hadash Party, Ayman Odeh, refused to condemn the regime’s chemical weapons attack on Douma, stating that “You will not get me to say that Assad did this. There are many war crimes happening in Syria. Any harm to civilians must be condemned, you can see ISIS and Jabhat al-Nusra [jihadist groups].” The leader of the British Labor Party, Jeremy Corbyn, also suggested that it is possible that parties other than the Assad regime were responsible for the chemical attack on Douma.

The Western and Arab Far-Left embrace and amplify findings about Israeli crimes against the Palestinians, but when it comes to Russian and Assad regime atrocities, they ignore and even question the findings of independent investigations by multiple UN bodies and human rights NGOs that have accused the Assad regime of “extermination, murder and rape” in detention facilities, crimes against humanity and war crimes.

The tragedy in Syria exposed the impetus driving much of the anti-war and pro-Palestine Left in the West and the Arab world, and concern for the human rights in general or Palestinians more narrowly, is clearly not the top priority.

Unable to formulate a clear vision after the collapse of Communism, the Far-Left drifted to embracing whatever actors challenge the Unites States and Israel, whether it is Putin’s repressive and homophobic kleptocracy, or Assad’s brutal dictatorship.

Elizabeth Tsurkov is a Research Fellow focused on Syria at the Forum for Regional Thinking, an Israeli think-tank. She can be followed on Twitter @Elizrael.