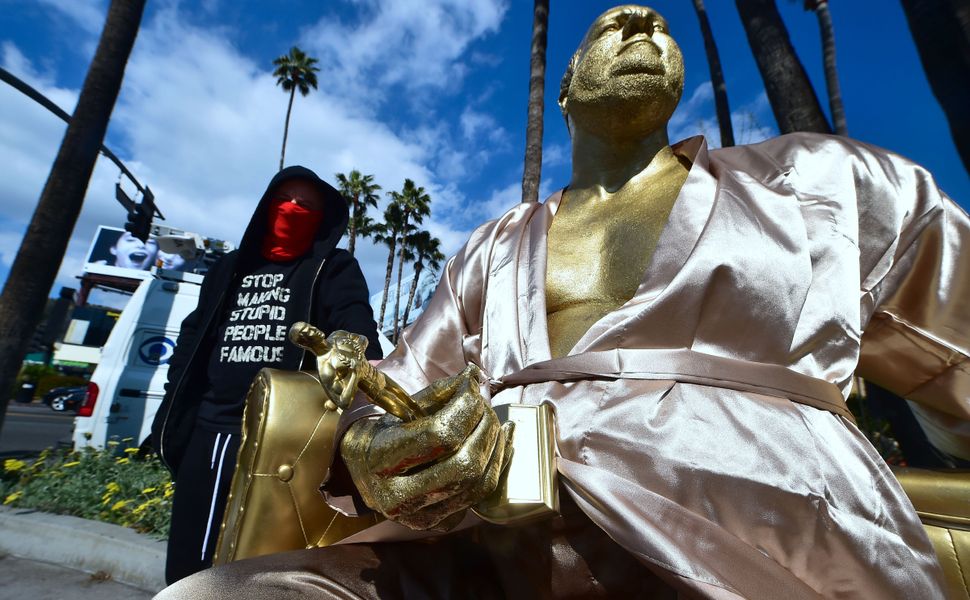 We seem to have entered round two (or three or four) of #MeToo revelations. On Friday, the writer Zizi Clemons alleged via Tweet that Junot Diaz had forcibly kissed her.

But as we prepare for the catharsis, let’s remember that we’ve also entered the #MeToo comeback zone, as those men who were exiled from cushy gigs and the lush gaze of the limelight seek, tenuously, to return. Charlie Rose, per a late-April leak by Tina Brown, was pitching a comeback show. Not to be outdone, The Hollywood Reporter interviewed comedy-club owners still eager to host Louis C.K. Glenn Thrush is back at the New York Times after an extremely brief suspension, and even Harvey Weinstein, the man at the center of it all, is gathering “exculpatory material” from his former company (to which end he has retained noted civil libertarian Alan Dershowitz.)

Everybody loves a redemption story. It is a classic arc, a bildungsroman for adults: Good Guy Did Bad, Then Makes Good. But who gets to be considered a “good guy” in the first place? Who gets to come back, and what is the line past which a comeback becomes impossible?

These are questions that will come up increasingly as men who have wronged women and been exposed seek to return to public life. And the answers get to the heart of what the #MeToo movement is all about. For #MeToo is about nothing if not empathy — who has earned it, and who has not. And like the #MeToo movement, a comeback story, too, is at its heart about empathy.

You know who understands this? Men who make stories for a living. And it just so happens that many of these men who have been exiled for their crimes against women are in the entertainment business.

What made the initial wave of #MeToo so electric was the way it seemed to introduce consequences to powerful men, those shapers of stories, movers and makers of money in great quantity who had seemed immune to them for years. Weinstein was both the catalyst of this phenomenon and its nadir: a man widely considered grotesque but powerful enough to quash unflattering stories; a man with the means to give excellently-timed donations to law enforcement officials; a man with the power to smear his enemies across the pages of tabloids and broadsheets alike.

It was, we are told, Weinstein’s genius, his ability to pick stories from the slush pile and turn them into Oscar material, that immunized him for so long. And perhaps it is that reputed genius that might allow him, against all conscience, to return to the public eye. No one demands our empathy like a “genius.”

To me, it’s no coincidence that the makers of stories — Woody Allen and Roman Polanski and Michael Oreskes and Kevin Spacey and Glenn Thrush and more — also seem to be testing the bounds of our ability to empathize with them.

There is another word for the wealthy and capable white man who populates so many of our stories: protagonist.

Who gets to be the good guy, and who is collateral damage? So many of our stories, our films and novels and TV shows, track the internal landscape of powerful white men, their courtships with despair and joy, whereas women of all kinds and men of color serve as ancillary characters at best. We are used to viewing anyone who is not a white man as a means of advancing a white man’s story: a poignant love arc that adorns his rise; a thorn in his side; a sidekick, a wingman, a downfall.

Fundamentally, that is how the #MeToo stories have unfolded, as the tales of powerful men and their sordid behavior. Concomitantly, our disappointment or rage or hope that these stories are untrue track with the rise and fall of each “genius.” And so we are treated to Tom Brokaw’s indignant protest that an allegation of sexual abuse is a “drive-by shooting,” an act specifically targeted to victimize him; thus a sympathetic account of Charlie Rose after his own abuse was outed portrayed him as “brilliant” and “lonely.”

How many prime-time dramas and Nobel-winning novels have primed us for years for the return of the misunderstood white male protagonist? Will #MeToo prove an exception, or just another iteration of the antihero’s eventual triumph?

The unequal distribution of empathy not only shortchanges the victims, and all women living in a system that sees their abuse as a means to a happy ending for some man. It’s also fundamentally in error. Because these are not truly stories of individuals. They are stories of systems, designed from the outset to impose shame and submission on victims of abuse.

That is why once one story of sexual abuse comes out, so many inevitably seem to follow: These are not stories of individual brokenness. They are stories of institutionalized depravity. They are, functionally, narratives of just how much effort and cruelty it takes to keep powerful white men in the spotlight, and to leave everyone else to rot in the dark.

Who gets to be a good guy — who gets to come back — is a function of who is allowed to be seen as fully human, with the capacity for penance, or at least for faking it. Contemplating the return from exile of those who treated women as objects, or worse, those who used their power to extract a terrible price from those subject to their influence, is to contemplate the way powerful systems are designed to protect them in the first place.

Consider the case of NBC. Under the leadership of a powerful man, the network rejected Ronan Farrow’s Weinstein exposés in the first place; they allowed the depredations of Matt Lauer to continue unchecked for years, despite female employees’ repeated complaints and warnings; and junior staffers reported feeling immense pressure to sign a women’s letter in support of Tom Brokaw, which came in the wake of his vociferous attack against a female former NBC employee who alleged sexual abuse at his hands.

It is a function of the ways we are conditioned to see white men as sole and powerful actors, as fully possessing a complex, crystalline, individualized humanity, that stories like these are rarely viewed in institutional contexts.

Louis C.K.’s story is not just the story of a man who used his celebrity status to humiliate and abuse women; it is also the story of who is viewed as necessary to comedy, and who is disposable.

The stories of Matt Lauer and Tom Brokaw reveal similar priorities among TV networks; R. Kelly’s years of flagrant abuse showed us truths about the music industry, if we are willing to see them. The stories of chefs like John Besh and Mario Batali bring a culinary flair to the overarching theme of feminine disposability. Harvey Weinstein was a power broker, and used his power to break people, too.

These are individual stories, but they are also systemic stories. That was the true catch in the heart, the blow that knocked one’s breath from one’s lungs, at the center of #MeToo. It wasn’t just that these individual men had acted like monsters; it was the elaborateness of the systems that enabled their monstrosities. It was the realization that it takes many hands to hold a woman’s mouth closed until she cannot use her voice. It was the realization that so many women, for so many years, had been bound with chains made of power and money and genteel, corporate brutality.

It was the paranoiac’s confirmation that yes, the whole system is out to get you.

We must recall, as these men plot their redemption arcs, that even now the systems that enabled their abuse are still largely intact. It is hard to undo hundreds of years of narrative, thought and reportage that conspire to make us see powerful men as complex selves, solely responsible for their own rises and their own falls, and ignore the ways they achieve and retain power.

A systemic story is perhaps less compelling; there are no singular villains, no singular wounded geniuses striving to make amends. There is only the truth, always a fragile and a messy thing; there are only the walls that close us in, and the Samson strength we need to break them open.

On Friday, the press reported that three women had filed suit against CBS for its alleged complicity in Charlie Rose’s reign of abuse. Perhaps this is the beginning of a reckoning, the tumbling of palace walls, a breaking-open.

In order for us to happen, it is incumbent on us to recall that any individual abuser is not a protagonist. He is a symptom, and our voices, risen and sustained in a demand for institutional change, are the only cure.