Visiting My Mother’s Hometown, A Changing Jewish Community In England 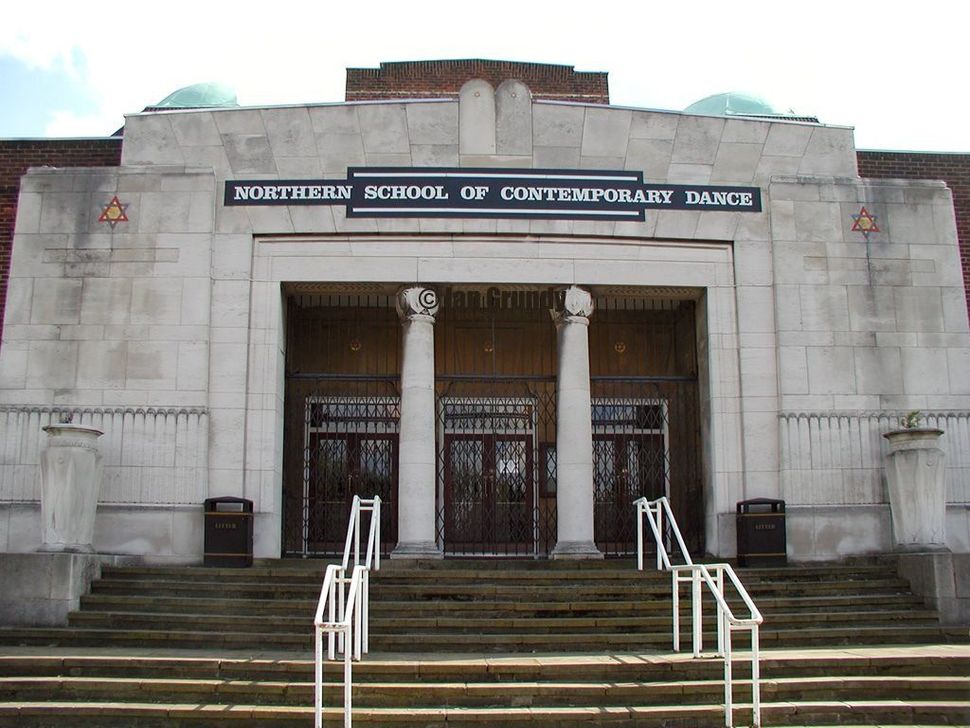 The building of the former New Synagogue in Leeds. Image by Pinterest

I’m still digesting the marvelous trip I took last week with my sister to visit our late mother’s hometown in England and learn more about her childhood. There are larger themes about British Jewry that I hope to write about in the future, but for now, I want to share with you one strong impression: cities display the passage of time on every street and every building. They never stand still.

So in the Leyland neighborhood just outside the Leeds city center, where my great-great grandparents once lived, the synagogue is now a Salvation Army.

Further north — the direction aspirational Jews followed — there’s a gracious building that once housed the ORT Technical School. It began in Berlin in 1937 and, fleeing the Nazis, relocated to Leeds in 1939, with 106 boys, all refugees. It remains a school, but now for Muslim girls.

The magnificent New Synagogue, built in 1932, fell into disrepair before it was beautifully restored and is now the headquarters for the Northern School of Contemporary Dance.

The grounds of the Chassidishe Synagogue, down the street from where my mother lived and likely where her family worshipped, were filled with a stream of worshippers on the Friday morning we visited. The synagogue building, opened in 1932, is now shuttered, and next to it was built the soaring Leeds Islamic Centre.

But here’s the thing. The Chassidishe Synagogue was also, in a sense, recycled. Jews moving from the Leylands — perhaps even including my family — purchased what was known as Spencer Hall, tore it down, and built a place of worship for their growing population.

There’s something sad about witnessing this organic transformation, but also something soothing.

What I’ve been reading. I have nearly finished an advanced copy of my friend Yossi Klein Halevi’s new book, “Letters to My Palestinian Friend.” It’s a compelling concept: Yossi, who lives in Jerusalem within easy eyesight of Palestinian territory, imagined writing to a neighbor across the divide, explaining the Jewish story from the perspective of a centrist Israeli Jew.

“One of the main obstacles to peace is an inability to hear the other side’s story,” he writes. And so he is offering an Arabic translation, which can be downloaded for free.

Yossi is no stranger to interfaith conversation; he co-directs the Muslim Leadership Initiative at the Shalom Hartman Institute in Jerusalem. His knowledge of and empathy for the Palestinian Muslim perspective infuses his “letters” with a warmth and understanding that would, I hope, make his work attractive to readers across the security barrier.

But I think this book deserves another audience, too: American Jews who are critics of Israel. I don’t personally agree with some of Yossi’s framing and positions, but that’s precisely why I am reading the book — to learn from someone I respect, to test my own assumptions.

Yes, we need dialogue between Muslims and Jews, Palestinians and Israelis, if these two peoples are ever going to figure out how to peacefully co-exist. But right now, my pressing concern is a domestic one: How to encourage American Jews, especially those who came of age after the Six Day War, to broaden the historical and religious context with which they view the conflict, and to challenge their own assumptions, wherever that will lead.

Lights, camera, RBG. In preparing for my interview in February with Ruth Bader Ginsburg, I read books, watched interviews, and tried to absorb everything I could about her. Still, I learned so much from “RBG,” the new documentary about the iconic Supreme Court justice — it is informative, funny, romantic, inspiring and sparkles with her unique personality.

The film, by Betsy West and Julie Cohen, opened in New York last week and I had the opportunity to interview the co-directors after a Forward-sponsored screening at the Marlene Meyerson JCC Manhattan, and then to speak with Betsy again at a Manhattan cinema. I was impressed by how diligently they worked to tell Ginsburg’s rich and multifaceted story. They tracked down her childhood friends, found rare home movies from early in her marriage, and caught intimate moments with her granddaughter. They didn’t shy away from controversy, either, though it’s difficult to minimize the superlatives when it comes to this extraordinary, 85-year-old jurist who has done more than anyone to ensure gender equity in the law — and can still do a vigorous physical workout with the best of them. (Yes, that’s in the film.)

“RBG” will be available nationally this week. Here’s the link to find out if it’s showing in a theatre near you.

Looking forward. Two new colleagues joined the Forward staff in the last few weeks. Jay Erlich is vice president for product and engagement, a new position designed to grow our digital audience and deepen engagement with readers and subscribers. And Alyssa Fisher is my new assistant; as with her predecessor, Ari Feldman, she will also be writing for our Fast Forward vertical. Ari did that so well that he’s been promoted to staff writer! I look forward to working with them all.

And with Mother’s Day coming up on Sunday, here’s a suggestion for the mother/daughter/sister/partner/woman in your life: Take advantage of our “Friends & Family” sale.

Visiting My Mother’s Hometown, A Changing Jewish Community In England