Israel’s Airstrikes In Syria Were A Message 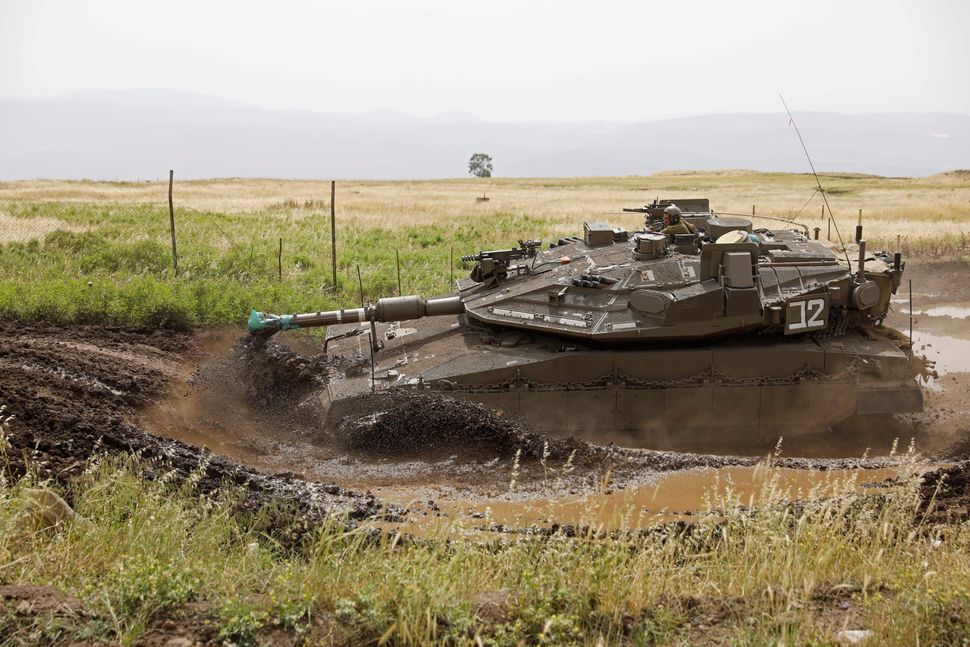 Israel’s bombing campaign against dozens of Iranian, Hezbollah and Syrian Army targets across Syria last night was the most extensive Israeli operation in Syria in over 40 years. Through these strikes, Israel is signaling to Tehran that it will not accept Iranian entrenchment in Syria and attempting to compel the Assad regime to rein in Iran’s activities in the country.

Israel’s disproportionate response to the 20-rocket barrage that caused no damage, with over 50 strikes across western Syria yesterday, are intended to signal to Tehran Israel’s willingness and intelligence capability to thwart its goals in Syria. At the same time, Israel wished to demonstrate to Syrian president Bashar al-Assad the reputational and military cost he would pay for continuing to allow Iran’s entrenchment in his country.

Thus, Israel released a video showing the destruction of Syria’s most advanced short-range air-defense system, the SA-22, stationed at the Mezzeh military airport, less than three miles from the presidential palace in Damascus.

The IDF struck an SA22 aerial interception system as part of a wide-scale attack against Iranian military sites in Syria pic.twitter.com/dFGXIwMT45

Through military actions and blusterous statements about assassinating Assad, Israel is attempting to demonstrate to the Syrian dictator the cost he would pay for continuing to allow Iran to expand its presence, in particular in south-western Syria, the focus of Israel’s airstrikes.

On the other hand, IDF statements following the strikes emphasized that the targets hit were Iranian, and the IDF Spokesperson insisted that “we warned the Syrian Army to stay out of this.” Israel bombed only anti-aircraft batteries that fired on Israeli jets. On multiple occasions, Israeli officials expressed no opposition to the Assad regime itself, only its alliance with Iran.

Israel’s statements and actions are intended to guide the regime to accept a reduction of Iranian influence in Syria in exchange for Assad remaining in power and possibly even regaining rebel-held areas along the border fence on the Golan.

Notably, Russia appears to share Israeli interests at this stage and is using Israel’s strikes to compel Assad to tow its line and distance himself from Iran. The strikes across Syria last night happened only hours after a meeting between Netanyahu and Putin, Israel informed Russia about the details of the strikes in Syria ahead of time, and Russian air defense batteries stationed in Syria did not fire at the Israeli aircrafts. Israeli officials are reporting that Russia has adopted an “apathetic” stance regarding last night’s escalation.

This is an uncomfortable position for Assad: if he reduces Iranian influence in the country, and thus becomes more dependent on Russia, Moscow would find it easier to compel him to step down. On the other hand, continuing to allow Iran to entrench itself in Syria would lead him to a confrontation with Israel, which could destabilize his rule and possibly result in his overthrow and even death. Decreasing Iran’s clout in Syria would serve Russia’s long-term interests of stabilizing the Syrian state and increasing its influence in the ongoing process of shaping Syria’s post-war future.

Thus far, Assad has adroitly exploited the financial, military and diplomatic support of Tehran and Moscow to defeat Syria’s opposition in the battlefield, keep providing at least some services to the population under its control and most importantly, public sector salaries, and shield himself from any sanctions levied through the UN Security Council. Russia is displeased with some of Assad’s decisions, but it has not been willing to disengage from Syria and lose its influence over shaping Syria’s future. Assad called Russia’s bluff multiple times when Moscow threatened to end its military intervention in Syria and withdraw its air force from the country, apparently to compel Assad to act more in line with Russia’s wishes.

Since the start of Russia’s military intervention in Syria in September 2015, Israeli officials, including the Prime Minister, visited Moscow on multiple occasions in an effort to protect Israel’s interests in Syria, namely, preventing a permanent Iranian presence in Syria and in particular in southern Syria. Despite these intensive negotiations, Iran continued to establish permanent military bases, recruit Syrian locals and bring more sophisticated weaponry into Syria for deterrence against Israel and possible future attacks.

The Kremlin wants its intervention in Syria to result in a success story: a stable pro-Russian regime accepted by the international community at the helm of a country undergoing rapid reconstruction. Russia is interested in the reinvigoration of the state apparatus and in particular, the Syrian Army, which has served as the main conduit of influence in Syria for Russia (and previously the USSR). Russia, itself in the middle of an economic crisis due to falling oil prices and Western sanctions over the illegal annexation of Crimea, realizes that Syria can not enjoy stability without billions in foreign aid for reconstruction that would need to come from the West and Gulf Arab states. Those countries will not finance the reconstruction of a state headed by Assad and without at least some concessions on the shape of Syria’s future regime and constitution. Russia is attempting to draft a somewhat less authoritarian constitution for Syria, and reports have appeared about Putin’s efforts to pressure Assad to resign.

Iran, on the other hand, sees the survival of the Assad regime as a guarantee for its influence in Syria and the preservation of the weapons’ pipeline running from Iran to Syria and from there to Hezbollah in Lebanon. Tehran is also working to establish a replica of its “resistance” model in Syria, with the establishment of military bases housing missiles that can be used to target Israel, as well as a network of militias under the dual control and influence of Iran and Syrian regime entities. Tehran and Moscow are also in competition over the few natural resources and profitable economic projects Syria can offer. Iranian commentators have voiced displeasure over the preferential treatment Russia has been getting in the allocation of such contracts.

Assad is interested in regaining control of all of Syria’s territory and maintain his personal grip on power, even if this means that very little reconstruction funds flow into the country and that a low-intensity insurgency and terrorism campaign persists into the future.

Assad’s forces have destroyed much of Syria, killed hundreds of thousands of Syrians and displaced millions to keep him in power. Assad is unwilling to now forego his power to ensure a stable and more prosperous Syria. Assad also has had the experience of enduring the status of a pariah head of state after Syria was implicated in the assassination of Lebanon’s Prime Minister, Rafiq al-Hariri, in 2005, only a few years later to come out of the cold and enjoy visits by European and American officials.

With this track record, why shouldn’t Assad expect that the West will, with time, acquiesce to his rule over Syria?

The ongoing escalatory dynamic between Iran and Israel is incredibly dangerous. We are just a few miscalculations away from an all-out war that would involve, at the very least, Hezbollah in Lebanon and pro-Iranian militias in Syria. Such a conflict would be incredibly costly to civilians in Lebanon, Syria and Israel, as all sides have shown a willingness to target civilians or disregard for their fate. The arsenal Hezbollah has amassed since the 2006 conflict could wreak enormous damage and paralyze not just Israel’s north, but the entire country, which is now within range of Hezbollah’s missiles. In recent years, Israeli officials publicly reiterated their commitment to the Dahiya doctrine of inflicting disproportionate mass damage to civilian infrastructure to deter attacks from non-state actors.

As Russia seems content to see the conflict between Iran and Israel play out, the absence of moderating leadership in the White House is particularly concerning. In fact, some Israeli officials believe that now is the time to launch a war with Iran on Syrian soil, before Iran’s presence is entrenched and harder to thwart and with the current hawkish leadership in Washington. President Trump, Secretary of State Pompeo and National Security Adviser John Bolton may be happy to see Israel go to war with Iran, but it would be Israeli, Syrian and Lebanese civilians paying the price.

Elizabeth Tsurkov is a Research Fellow focusing on Syria at the Forum for Regional Thinking, an Israeli think-tank. She can be followed on Twitter @Elizrael.

Israel’s Airstrikes In Syria Were A Message