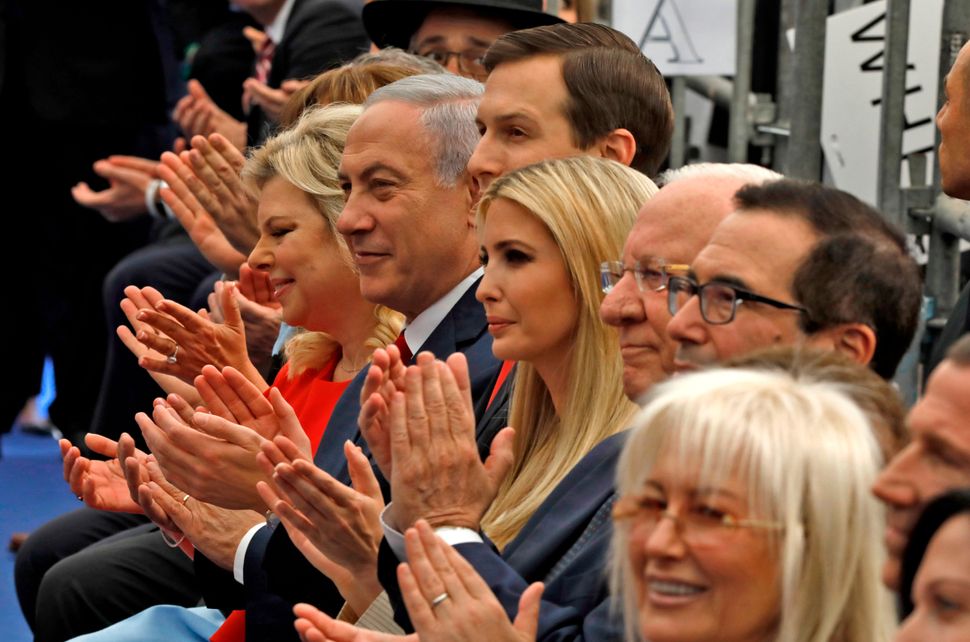 For more than a century, Palestinians have tried to convince the world (wrongly, in my view) that Zionism is inherently racist. Now they have a powerful new ally: Donald Trump.

Consider the bigots that Trump has assembled to celebrate the move of America’s embassy to Jerusalem. Among the Americans in attendance were Trump’s ambassador to Israel, David Friedman, who in 2015 suggested stripping Arab Israelis who hold views Friedman considers “seditious” of their citizenship. That same year, Friedman urged that “Muslim immigrants” to the US “be required, as part of their application, to consent to complete transparency with respect to all Internet and telecommunication activity. Any activity on Facebook, Google, Twitter or other social media or communication portals, including under anonymous or alternative identities, must be available for inspection.”

How might Friedman himself fare under such scrutiny? The Jewish Telegraphic Agency this week reported that Friedman’s charity had donated to an openly racist settler group classified as a terrorist organization by the United States government (the organization disputes the claim).

Among the other Americans in attendance were Trump’s campaign benefactor, Sheldon Adelson, who has claimed that all terrorists are Muslim and that the United States should drop a nuclear bomb on Iran.

To lead the attendees in prayer, Trump tapped Dallas pastor Robert Jeffress, who has said, “Islam is an oppressive” and “evil, evil religion” that “promotes pedophilia.”

Then there are the Israelis. Upon arriving for the embassy celebration, the leaders of the American delegation, Jared Kushner and Ivanka Trump, received a blessing from Sephardi Chief Rabbi Yitzhak Yosef, who in 2016 argued that non-Jews had no right to live in the land of Israel and in 2018 called black people “monkeys.”

Trump himself received a different sort of blessing from the soccer team Beitar Jerusalem, which renamed itself Beitar Trump Jerusalem in honor of the embassy move. Beitar just happens to be the only team in the Israeli premier league that has never had an Arab player. Its fans are notorious for chanting anti-Arab slogans and, when black players appear on the field, for making monkey sounds.

This is hardly surprising. The embassy move is the handiwork of an American president who retweets videos entitled “Muslim migrant beats up Dutch boy on crutches!” “Muslim Destroys a Statue of Virgin Mary!” and “Islamist mob pushes teenage boy off roof and beats him to death!” And he has carried out the move in conjunction with an Israeli prime minister who has warned against the threat of Arab Israelis voting “in droves,” and proudly quotes Winston Churchill as declaring that, “Left to themselves, the Arabs of Palestine would not in a thousand years have taken steps toward the irrigation and electrification of Palestine.”

Trump and Netanyahu are feeling cocky. The Palestinian national movement has never been weaker. It has been undermined by its own, self-inflicted, divisions. It’s been undermined by Sunni Arab leaders who see Israel as an ally in their struggle against Shia Iran. And it’s been overmatched by Israel’s economic and technological prowess, which has helped the Jewish state forge ties to developing world powers like India, which once championed the Palestinian cause.

The racism on display at the embassy celebration is a symptom of this cockiness. So is Israel’s policy of collective punishment toward Gaza, a policy that has fueled the protests that on Monday left dozens of Palestinians dead. Trump and Netanyahu aren’t worried about validating the claims of Israel’s most vociferous opponents. Because those opponents lack political power.

One day, I suspect, that will change, at least in the U.S. Ten years ago, Democrats saw Netanyahu as the Israeli Dick Cheney. Now they see him as the Israeli Trump. Which is why, in the years to come, Israel’s support among grassroots Democrats will likely decline even further. And, why, sooner or later, insurgent Democratic candidates will challenge party leaders who embrace an AIPAC-like perspective that is increasingly rejected by their voting base.

These are salad days for the Israeli and American Jewish right. The Trump and Netanyahu administrations don’t have to pretend they support a Palestinian state. And they can surround themselves with people who proudly declare their bigotry towards Palestinians, Arabs and Muslims.

Hubris, however, rarely ends well. And, somewhere, the other America is watching.