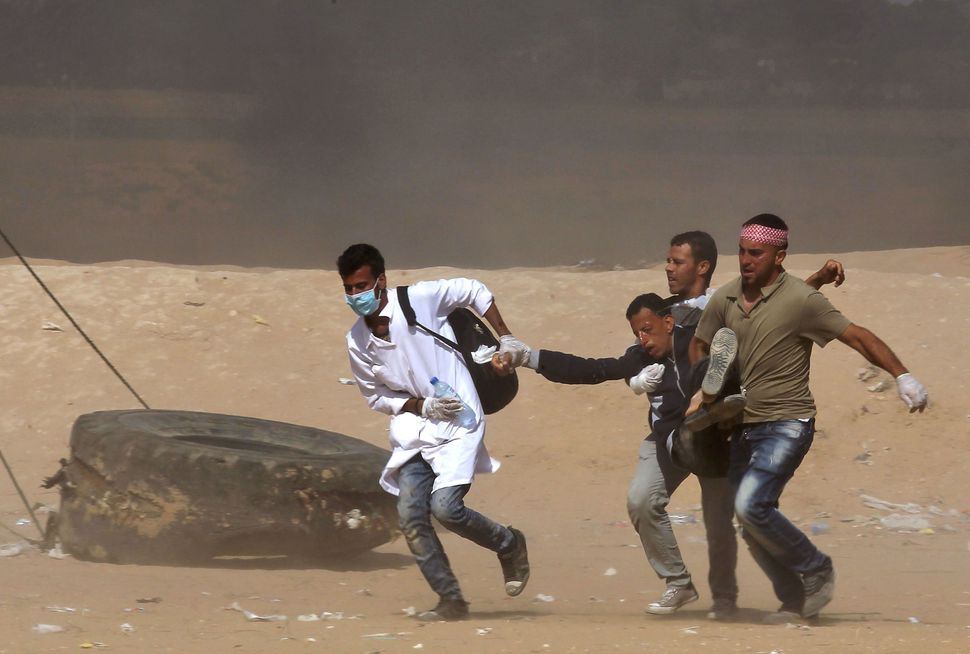 The other day, a thoughtful acquaintance, who is to my right politically, asked me a question. He asked what I’d advise Israel to do when faced with thousands of Palestinians, some likely bent on violence, who are trying to storm the fence that separates the Gaza Strip from the rest of Israel. (I say “rest of Israel” because I believe Gaza still remains under Israeli occupation.

I told him I don’t know. I don’t know because I’m not a military planner or an expert in crowd control. And since I don’t know, I’ve avoided criticizing the IDF for using “disproportionate force.” I’m perfectly willing to acknowledge that, at the moment when thousands of protesters converged on the fence, none of Israel’s options were good. But it’s the wrong question.

In the mid-to-late 1960s, riots broke out again and again in black neighborhoods in American cities. From a crowd control perspective, the police faced a difficult choice: How to stop people from destroying property, and even committing violence, without using lethal force. But had someone at the time asked: “What should the police do?” they would have been asking the wrong question. The right question wasn’t “How should America’s police respond to riots,” it was: “How should America’s leaders respond to the grievances that produced the riots in the first place.”

These were not split-second decisions made by young, frightened soldiers. They were policies formulated by politicians in air-conditioned offices. Those politicians responded to Hamas’ victory in the 2006 legislative elections by helping to torpedo a Palestinian coalition government that would have left Mahmoud Abbas as the Palestinian Authority’s President. They rejected negotiations with Hamas until the group met conditions—among them the acceptance of past agreements and support for the two state solution—that Israel’s own current government does not meet. Instead, they chose a policy of collective punishment: a policy that punished the people of Gaza for being ruled by Hamas. More than a decade later, Hamas remains in charge. But Gaza—which has barely any electricity or drinkable water—is on the verge, according to the United Nations, of becoming “unlivable.”

A week ago, Hamas again floated the idea of a long-term truce with Israel. It did not do so because it has stopped being an authoritarian, illiberal organization with a history of terrorism that rejects Israel’s right to exist. It did so because it is geopolitically isolated. Nonetheless, a long-term truce would constitute progress. One has existed since the early 1950s between North and South Korea. Had Israel entertained the offer, and taken steps toward easing the blockade (some aspects of which have little to do with security), yesterday’s killings might not have happened. But Benjamin Netanyahu, according to news reports, did not respond.

He did not respond for the same reason he has escalated settlement building and rejected a Palestinian state near the 1967 lines: Because he sees Palestinians not as human beings with inherent rights, but as an enemy to be subjugated.

Different choices are possible. They have always been possible. But they require citizens, in both Israel and America, willing to demand that their leaders make them—before more Palestinians end up dead.