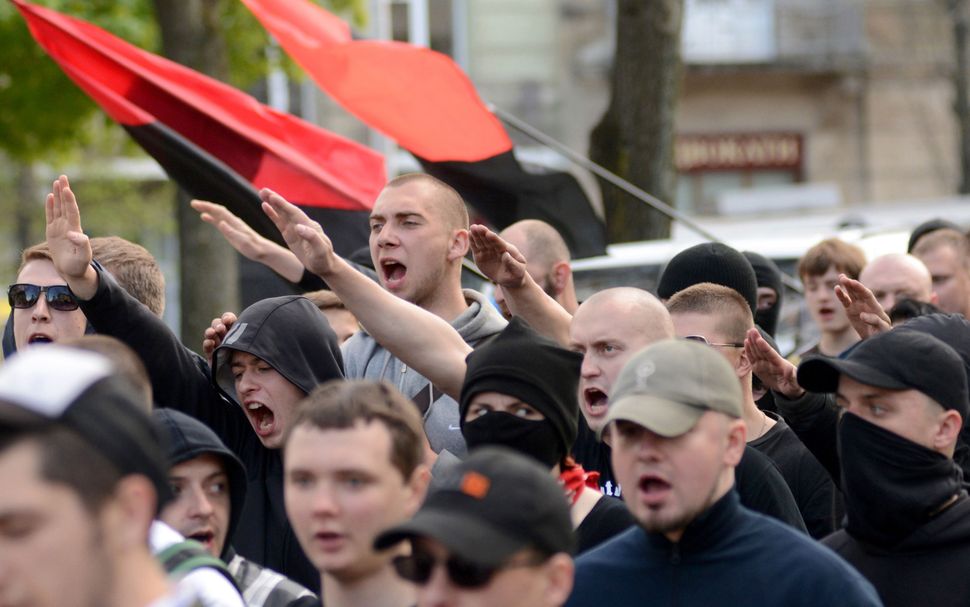 Ukrainian ultra-nationalists salute as they march in the center of the western city of Lviv on April 28, 2013 to mark 70th anniversary of 14th SS-Volunteer Division ‘Galician’ foundation. The 14th Waffen Grenadier Division was a World War II German military formation initially made up of volunteers from the region of Galicia with a Ukrainian ethnic background, but later also incorporated Slovaks, Czechs and Dutch volunteers and officers. Neo-nazis from Russia and Lithuania also took part in the march. Image by Getty Images

A wave of anti-Semitism has swept over Ukraine. In the past three weeks alone, a far-right leader publicly called for cleansing Ukraine of zhidi (a slur equivalent to “kike”); a Holocaust memorial in Ternopil was bombed; hundreds marched through Lviv, in honor of an SS unit, complete with Nazi salutes; “Death to Zhidi” graffiti was scrawled in two cities; a revered rabbi’s tomb was vandalized; a Romani camp in Kiev was attacked and burned by far-right nationalists, and hundreds rocked out at a neo-Nazi concert clad in swastikas and throwing up Nazi salutes.

This outpouring of hatred got the attention of the World Jewish Congress, which put out a short video condemning the surge of anti-Semitism:

But we shouldn’t heave a sigh of relief just yet. Unfortunately, WJC’s willingness to accept Poroshenko’s word is premature. Over the past four years of Poroshenko’s presidency, Ukraine has experienced a steady growth of anti-Semitism, including the glorification of Nazi collaborators, vandalism of Jewish sites and public threats against Jews — and the rate of anti-Semitic incidents appears to be escalating.

After the WJC welcomed Poroshenko’s commitment to fight anti-Semitism and other forms of hatred, a Ukrainian mayor was caught spewing vitriol about Jews seeking to kill gentiles; the Ukrainian consul in Hamburg was suspended following allegations of writing anti-Semitic Facebook posts, including blaming the Jews for WWII; the tomb of the daughter of a revered rabbi was defaced for the fifth time in two years; far-right thugs stormed the home of a TV station co-owner; the neo-Nazi C14 gang carried out another Roma pogrom, torching an encampment in L’viv; and ultranationalists affiliated with the neo-Nazi Azov Battalion shut down an LGBT event sponsored by Amnesty International and Human Rights Watch in Kiev while authorities refused to act.

Poroshenko became president following the bloody Maidan uprising of 2013-2014, in which ordinary Ukrainians died for the right to live in a democratic, Western nation. But at best, Poroshenko’s government has ignored the anti-Semitism problem in its midst; at worst, it has actively encouraged it.

The April 28 march in L’viv, during which a thousand people honored SS Galichina, a Ukrainian division in Hitler’s Waffen-SS, was not an isolated event planned by a fringe group. The march was the culmination of a weeklong celebration of SS Galichina promoted by the L’viv city council. Bizarrely enough, this included a contest encouraging teenagers to submit fan artwork of the SS.

How does a European city come to glorify an SS unit whose members took a personal oath of loyalty to Hitler? It helps to have a healthy dose of historical revisionism. Last year, the director of the Ukrainian Institute of National Memory — an official department of the Kiev government — declared that SS Galichina fighters were actually “war victims.” This, of course, raises the question: if the SS were victims, what does that make the Jews and other ethnicities they slaughtered?

SS Galichina is far from the only WWII-era paramilitary sanctioned by modern Ukrainian authorities. In 2015, the Ukrainian parliament passed laws that proclaimed the Organization of Ukrainian Nationalists, which collaborated with the Nazis and was responsible for liquidation of thousands of Jews, and the Ukrainian Insurgent Army, which carried out the ethnic cleansing of 70,000-100,000 Poles, as well as other ethnicities on its own accord, to be heroes of Ukraine.

Thanks to Kiev’s laws, as well as public campaigns conducted by the Institute of National Memory (whose 2018 budget is around two million dollars), these butchers are now celebrated across the land.

It should come as no surprise that state-sponsored glorification of anti-Semites is often accompanied by anti-Semitic outbursts. On January 1, 2017, thousands marched through Kiev in honor of OUN leader Stepan Bandera. Chants of “Jews Out!” rang through the crowd, yet the next day, police denied hearing anything anti-Semitic. Last June, L’viv had a three-day festival in honor of UPA leader Roman Shukhevych, and a synagogue was firebombed during the festivities. In November, Radio Free Europe reported seeing Nazi salutes as 20,000 torch-wielding men marched in honor of the UPA.

Anti-Semitic vandals in Ukraine are hardly concerned with originality. The Holocaust memorial recently firebombed in Ternopil has been defaced on four separate occasions over the past year. But that’s only one memorial: other Holocaust sites, Jewish centers, cemeteries, tombs and places of worship are vandalized with swastikas, SS runes and slurs on a regular basis.

The rampant vandalism has gotten to the point where the Israeli Foreign Ministry took the unusual step of publicly demanding that Ukrainian authorities begin investigating these assaults. A similar plea was made by the director of the Ukrainian Jewish Committee in a New York Times op-ed, which stressed the government’s apathy in protecting religious and Holocaust sites.

The May 2 incident in Odessa, when Tetiana Soikina, regional head of the ultranationalist Right Sector organization, promised to get rid of the zhidi, comes amid a spate of similar calls to violence by public figures. In March 2017, Member of Parliament Nadiya Savchenko, once celebrated as the “Ukrainian Nelson Mandela” by Western media, exploded in an anti-Semitic tirade on live television. “Why is no one talking about what the people are saying…today’s Jewish yoke?” asked a caller. “Good question,” replied Savchenko. “Yes, our government has non-Ukrainian blood, so to speak. What should be done about it? We must think and take action.”

Barely two months later, a general in Ukraine’s security services posted flagrant threats promising to exterminate the zhidi, which prompted the Anti-Defamation League (ADL) to demand Poroshenko fire him (no action was taken). Several months later, the regional head of the far-right Svoboda party went off on an anti-Semitic rant after local Jews protested the erection of a statue to Symon Petliura, yet another Ukrainian “hero” responsible for mass pogroms. “Get used to our rules or be punished,” the Svoboda head said, encouraging his fellow ethnic Ukrainians to “put minorities in their place.”

Unfortunately, the public officials and party leaders making such statements have done so with impunity. And even though Poroshenko promised an “immediate” law enforcement reaction to Soikina’s public threats, a spokesman for Ukraine’s Ministry of Internal Affairs stated that Soikina’s call to cleanse the country of Jews was “not inherently discriminatory or a call to violence.” Mostly likely, Soikina, like the others, will face no consequences.

Historically, whoever targets the Roma sooner or later comes after the Jews.

Watching a short clip of the recent pogrom is bone-chilling — masked thugs chase terrified women and children in the middle of a European capital, as black smoke from the burning Roma tabor (camp) fills the background. The women scream for help, which doesn’t come. Indeed, when the police were finally shamed into opening an investigation, they classified it as “hooliganism,” which shows the shocking indifference with which Roma lives are regarded.

But the most disturbing aspect here is this was at least the fourth anti-Roma pogrom in Ukraine over the past two years.

In September of 2016, two-dozen Roma were forced to flee an Odessa village after locals burned down their homes. The then-governor of Odessa responded by praising the villagers’ actions, saying that the village has long been a den of “anti-socialism,” and that he fully shared the mob’s concerns. The only thing the police did was provide a “safe corridor” for the Roma to leave through. In May 2017, a Roma man was killed during an attack in Kharkiv; according to witnesses, local authorities were involved in the shooting. That same month, a group of men attacked Roma families at a Kiev railroad station.

The recent pogrom in Kiev, however, stands out in that the responsibility was proudly claimed by C14, a neo-Nazi gang that has been gaining influence over the past year. C14’s actions caused Amnesty International to issue an urgent statement warning that the radicals “feel untouchable…the authorities, in most cases, do not act,” and anyone, including Jews, could be next.

The examples listed above are just a small fraction of the deeply disturbing pattern of anti-Semitism and Poroshenko’s inability and unwillingness to assert the rule of law. They don’t include the rampant attacks on LGBT communities or the way far-right groups disrupt courts and defy law enforcement. But they should be enough to show that readiness to accept empty assurances from Poroshenko is shockingly naïve.

American Jews should by all means celebrate Poroshenko’s liberalism — after the organizations in charge of monitoring global anti-Semitism confirm that Ukraine is getting better, not worse. Until then, “gratified” is about the last thing those concerned with anti-Semitism should feel about Ukraine.