Why Giving Sermons With Supper Is So Dangerous 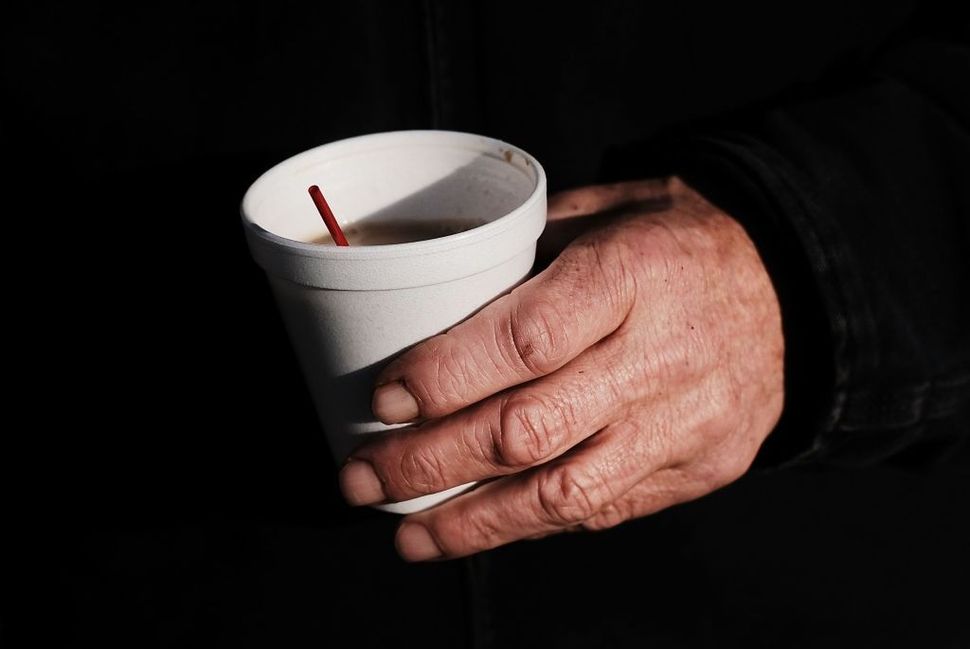 Norman pauses with a cup of coffee outside of a soup kitchen in an economically stressed section of the city on March 20, 2018 in Worcester, Massachusetts. Worcester, once a thriving manufacturing hub, has recently made moves into the medical industry, education and as a metropolitan hub for refugees in an attempt to revive its moribund economy. Like a growing number of Northeastern cities, Worcester has a chronic problem with homelessness and opioid addiction. The latest data in 2016 showed that 24.4% of Worcester residents were living below the poverty level. With overdoses increasing, the city plans to file litigation against pharmaceutical manufacturers and distributors of opioid products. Image by Getty Images

On May 3 — National Prayer Day — President Trump issued an executive order strengthening the role of religion in the affairs of state. The order establishes a Faith and Opportunity Office within the White House. The executive branch will increase its focus on alleged religious discrimination in national life, and President Trump will appoint a faith adviser to bring religious considerations into policy debates.

Critics concentrated their ire on these aspects of the new policy. Establishing an office of faith, they say, violates the separation of church and state by giving the former a formal role in the latter. In addition, we can see though the promise to investigate “discrimination.” The federal government now will support violations of the Civil Rights laws when a business claims its religious scruples require the rest of us to acquiesce in bigotry. (The Supreme Court needs no help in that regard, as we shall see before its term ends.)

But commentators largely have overlooked a more egregious provision in the executive order — one that may do more damage to our social fabric.

I refer to the rules surrounding proselytizing. May a religious-based group, a soup kitchen, for example, use federal money to deliver a lecture promoting its faith or require prayer along with the meals to the poor?

President Obama, who surprised many of his supporters and continued President George W. Bush’s faith-based initiative, split the difference, as was his wont. The organization could preach to the hungry. However, if the beneficiary objected to the indoctrination, the soup kitchen would have to direct the client to alternative social agencies, where the meal would come with side dishes and dressing.

The new policy eliminates that requirement. A poor person unwilling to listen to federally-supported religious “education” must fend for himself, and perhaps go hungry.

It takes very little legal learning to conclude that subsidizing missionary work violates the spirit, if not the letter of the Establishment Clause of the First Amendment. Even an extreme conservative as Justice Antonin Scalia believed that the Constitution prohibited government favoring one religion over another. (He did not extend this benevolence to atheists, however.)

Forcing a Jew to hear a lecture about the divinity of the Trinity, or a Protestant to listen to a talk about the infallibility of the pope should repel us all. By withholding information about other sources of help — organizations more compatible with the beliefs of the client in distress, the faith-based group engages in coercion.

However, I think a more fundamental problem presents itself. As much as I admire President Obama, his executive order fell short on this point. The Obama executive order required faith-based organizations to send clients elsewhere, but only if the individual objected to the side dish of religion. In the real world, how many suffering people in dire need of help have the courage to tell their putative rescuer “no, thanks,” knowing that refusal will result in being turned away and shuttled off elsewhere? Though not overt coercion, placing the burden on the hungry to object constitutes psychological coercion, of the type the Supreme Court has recognized in other contexts.

The Supreme Court has forbidden prayers in public schools since the early 1960’s. More recently, the Court held invalid sectarian prayers at high school graduations. In Lee v. Weisman, 505 U.S. 577 (1992), Justice Kennedy wrote, “ Our decisions recognize, among other things, that prayer exercises in public schools carry a particular risk of indirect coercion. The concern may not be limited to the context of schools, but it is most pronounced there… . .What to most believers may seem nothing more than a reasonable request may appear to the nonbeliever or dissenter to be an attempt to employ the machinery of the State to enforce a religious orthodoxy.”

Most famously, the Warren Court’s decisions interpreting the Self-Incrimination Clause of the Fifth Amendment recognize that the same type of coercion occurs with adults. The famous Miranda case, which Chief Justice Rehnquist reaffirmed decades later, required the police to inform suspects of their right to counsel. Notably, the Court did not limit it to formal interrogations after an official arrest. Neither did the Court require that, any time law enforcement talked with a citizen, that the officer read the Miranda warning. Rather, the procedure applied when the suspect did not feel “free to leave” the encounter. Psychological pressure can coerce as much as physical force.

Here, too, a hungry or ill person on the verge of rescue feels the same compulsion. Though the religious organization would not harm him, as the police might, they will refuse to help him if he asserts his right to religious freedom. Having to go elsewhere can hurt just as much as being kicked back into the street. Better to prohibit prostheletization altogether.

Why Giving Sermons With Supper Is So Dangerous