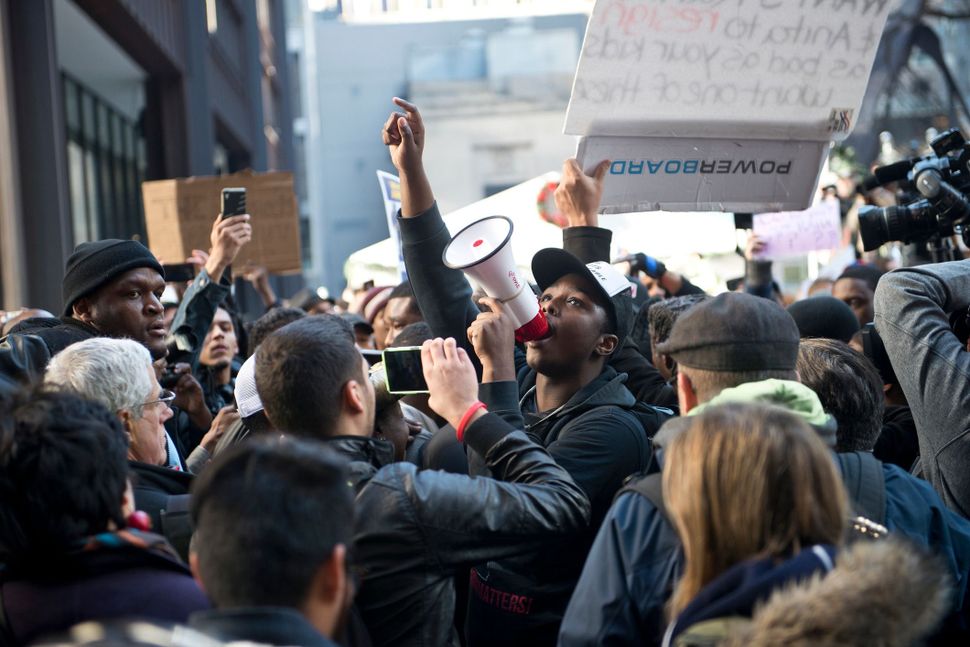 Like many Jews I know, I experienced the election of Donald Trump to the highest office in the country as a wake up call. Once a-political, I’ve spent the last two years in a fury of activism.

But it hasn’t pleased everyone. In addition to the Trump supporters in my community, I recently got some criticism from someone on my side. A friend, an black-Jewish activist, wrote to tell me that though he was happy to see me writing about racism, and especially about racism in the Jewish community, he was also upset.

“Elad. I truly and genuinely support what you’re doing. But I’d be lying if i said your post-trump posts don’t piss me the fuck off bc they are things that ive literally told/said to you years before. That having been said, keep doing it. Your voice is reaching spaces that i can’t and frankly can’t be bothered to reach anymore.”

His anger stemmed from the fact that as a black Jew, had felt unheard for so long. Meanwhile I, a Sephardi Jew who has not experienced the persecution he has, have nevertheless in my newfound role been gaining an audience – specifically for saying things that he and others had been screaming about for years, decades, generations.

I had quibbles with his analysis. For example, I think racism is taking on a new and distinct character in the Jewish community, different than it has expressed itself in the past. But despite my quibbles, I tried to take in his message, tried not to get too defensive.

I did not succeed. I could feel that feeling of hurt, bruised ego calcifying over his message.

But last week, it came back like a bolt of lightning, triggered ironically by a piece of fake news.

It started with images of immigrant children held at the border that spread virally on social media. The images were shocking, showing children kept in cages, covered with thin alluminum blankets, separated from their parents.

Except there was a problem: The images were from 2014, the result of an Obama-era policy. They were taken a year before Trump even entered the national consciousness as a serious presidential contender, and long before Trump and Sessions expanded the powers of ICE and the border agents who were depicted in the images. They were taken at a time that the ACLU claims hundreds of children were subject abuse by these same authorities, including “allegations of physical abuse – small children were shot with tasers and run over by patrol vehicles – and sexual abuse” – all this during President Obama’s era.

When it became clear that this wasn’t about Trump, I, like others who had shared the the photos, deleted the images and moved on.

But in the back of my mind, something nagged at me, something that I had been struggling with since this conversation with my friend: Where was I when this was happening in 2014?

I wasn’t aware of the photos in 2014 because I was not yet an activist. But others were. So many of us were shocked into action last week that we didn’t stop to pause and appreciate the people who were already in action, people who did not have the privilege of being quiet in the past. From the immigrant advocates who were demanding we acknowledge Obama’s own involvement in the deportation of so many, and Bush’s creation of ICE, to the Black Lives Matter movement which cried out for us to understand that Obama’s election did not mean that systematic problems in the United States had disappeared, these voices cried out while so many of us watched in sympathy without acting, tried to hold a “moderate” approach by not getting involved and blaming “both sides”, or simply didn’t even hear.

We liked the feeling of being in the vicinity of the warriors. My friend was someone I enjoyed basking in the glow of, even though I could not help feel that his voice was too angry, too divisive for me to truly join in the fight. Back then, in 2014, in 2015, I felt that he had his place, and I had mine. And mine was being a peacemaker, a uniter.

I now realize that this was just an illusion. The truth is, I was afraid. I was afraid to speak as forcefully as him because for me it came with a cost I wasn’t willing to pay.

All that’s changed now. It may be too little, too late to mollify my friend, but I’m in the fight now, body and soul.

But I’ve also come to realize that it is not enough to simply join those who have fought so hard before us, neither is it enough to appreciate these voices. We must listen to them more. We must learn.

There is a reason those disenfranchised by the current power structures were not surprised by Trump’s election, and it’s because they were educated about and understood the systematic and historic dynamics that led directly to his win. They did not have the luxury of illusions that people like me had created to convince ourselves that America was better than it actually is.

The Jewish tradition teaches that repentance is not simply saying, “I’m sorry.” It’s much deeper. It means not allowing ourselves to commit the same sin. It means working to fix the damage of the sin. It means teaching others about what we have learned.

In this case, the sin wasn’t just being too moderate, too afraid, and too apolitical. It was also not listening to these advocates and voices. It was allowing ourselves to think our cowardice was actually optimism. It was thinking someone like Trump was a singular, unique force, and not simply the extreme expression of America’s darkest truths. It was not putting ourselves on the line for those less fortunate than ourselves.

For all these things and more, we have to repent. Not just by saying “I’m sorry,” but through refusing to commit the sins again, correcting the sins, teaching about the sins. Most important, it means listening to the ignored voices, raising them up, learning more. It’s not just about putting ourselves on the line but about learning who were the Cassandras all along who knew what was coming.

This means admitting something that is scary for many of us, something that perhaps makes us more afraid of repenting than anything else: facing the fact that what we believe today may very well be wrong.

Martin Luther King Jr. excoriated moderates in his “Letter from a Birmingham Jail,” when he wrote that, “the Negro’s great stumbling block in his stride toward freedom is not the White Citizen’s Counciler or the Ku Klux Klanner, but the white moderate… who prefers a negative peace which is the absence of tension to a positive peace which is the presence of justice… who paternalistically believes he can set the timetable for another man’s freedom…”

What if that is us in this generation? What if we are not aware of the great amount of work we have to do and the marginalized voices who are saying the same exact things to us today?

This is not even a “what if” scenario: it is the reality. We are, by virtue of benefiting from the power structures, wrong now. This is why repentance is so important. Because it is not a momentary act but a constant reevaluation of where we stand and who we are.

And in this case, it is a constant state of listening to those who know more than we do, who live on the margins and experience things we can’t imagine, and who are speaking to us even as we claim we can’t hear them.

It is only when we face this reality that we will have even begun the road to fixing the damage our silence caused.

But I also know sorry is not enough. And I will do my best to repent properly.