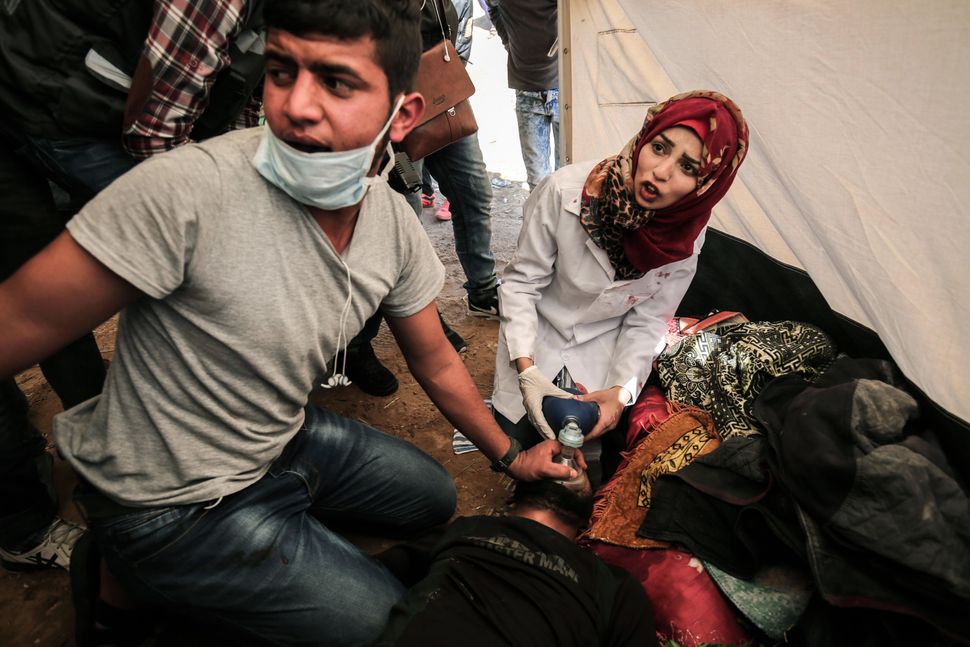 On June 1, 21-year-old volunteer paramedic Razan al-Najjar was shot dead at the Gaza protests while rescuing injured protestors near the separation fence.

Anyone with the smallest modicum of moral decency should be shattered, devastated and overwhelmed by her death, just as they should be devastated by the horrendous improvised projectile that hit a kindergarten in Israel. Both incidents deserve unequivocal condemnation, at the very least, though only one resulted in death (thank God, none of the children were hurt).

But al-Najjar’s murder shows us something else, something horrific that transcends the border shootings. For the systematic dehumanization of the Palestinian people, especially in Gaza, happens not only at the hands of the Israeli guns and policies but in the media afterwards, in the framing by Israel’s supporters.

When an IDF soldier killed al-Najjar, she was fighting against the inhumanity of life in Gaza by saving the lives of injured Palestinians who were protesting the blockade, while also fighting for the world and her own society to recognize her courage, hard work and strength. “In our society women are often judged,” she told a reporter during an interview at a Gaza protest camp last month, “But society has to accept us. If they don’t want to accept us by choice, they will be forced to accept us because we have more strength than any man.”

On the day she died, al-Najjar approached the fence with hands up in the air, before she was shot in the chest with a live bullet while trying to save a life.

#update: #Gaza MoH shared a video, reportedly taken minutes before Razan al-Najjar was shot, showing her & the rest of her paramedic team walking towards the #GazaFence w/ hands in the air. According to 1 report, the 21-year-old nurse was shot while helping another paramedic pic.twitter.com/uuwlvGmgG2

And yet, to far too many, al-Najjar herself as well as her family, friends and colleagues, who cried their hearts out at the hospital, are to blame. As one writer put it in News24, the Palestinians “are also, whether wittingly or unwittingly, making themselves complicit in the deliberate sacrifice of Palestinian lives for propaganda purposes.”

This has been the prevailing narrative throughout the Gaza protests. The Palestinians are at best Hamas’s unwitting “human shields.” Hamas is entirely to blame, as US Ambassador to the UN Danny Dannon demanded be recognized.

If Israel’s narrative is to be believed, al-Najjar was woken up in the middle of the night and taken to the protest at gunpoint by Hamas, forced to stand motionless as a human shield in front of the fence until she died, just as the 45,000 protesters were who, according to the manual of dehumanization, are completely indifferent to their agony and untouched by their slow death.

And how do we know that Hamas is to blame for everything that happens at the border fence, including the killing of medics and press? Because it’s impossible that the most moral army in the world would kill innocent civilians.

This is what the world sees: Hamas winning a PR war, as one headline put it, every time horrifying pictures of dead and maimed Gazan children and women surface in the media. As Alexander Downer, a former Australian foreign minister and High Commissioner to the UK, wrote in the Financial Review, “80% of the victims were Hamas fighters, not Sunday afternoon protesters. For Hamas it was a triumph. They got what they wanted. Martyrs, as they like to call the victims, helped them win a media propaganda war worldwide.”

“Child sacrifice” was a common practice amongst black protesters in the Soweto uprising in Apartheid South Africa, according to the Apartheid regime. In the American south, during the civil rights movement, segregationists who turned water hoses and dogs on children in Birmingham, Alabama, claimed that they were only defending themselves against credible threats. So why should it be any different in Gaza?

The IDF surely had a reason to target every single one of the fatalities, we read over and over. The IDF harbors no malice, its defenders assure us. We Gazans are destined to be extinguished.

Our blood is not on the hands of the snipers who pull the trigger, but on our wailing parents, our feckless government and the cameramen who documented the killings.

For too long, we’ve been subjected to dehumanizing narratives about Palestinians. Gazans are not extraordinary heroes or unbreakable symbols. We love our lives and treasure our children just as all people do. We are not automated robots that hasten towards death and crippling injuries on command.

Al-Najjar, along with the other 122 civilians killed and the 13,000 protestors injured in Gaza’s recent protests never chose this life. All they wanted was to break out of their prison, to find a life and a future. Their call for the right of return shows the extreme level of desperation they’ve reached: they’ve given up completely on the unlivable cage in which they are trapped and are calling for righting the only wrong in their life that causes all their misery –being born on the wrong side of the fence.

We Gazans are caught between a rock and an unlivable, uninhabitable place, where the water we drink and the soil in which we plant are poisoning us and our children. Our air, land and sea are completely sealed off by Israel and Egypt’s military might. We Gazans endure humanitarian disaster, generation after generation, and are denied even the most basic right to escape a slow death. We are two million civilian prisoners, caged in a toxic slum from birth to death.

We are neither more nor less resilient and steadfast than any other human people in this world. We too feel pain and suffering. We too have a breaking point.

But like al-Najjar, we too have dreams and hopes for a livable future.