Zeev Porath Chronicled Nazi Rapists And Other Atrocities – In His Drawings 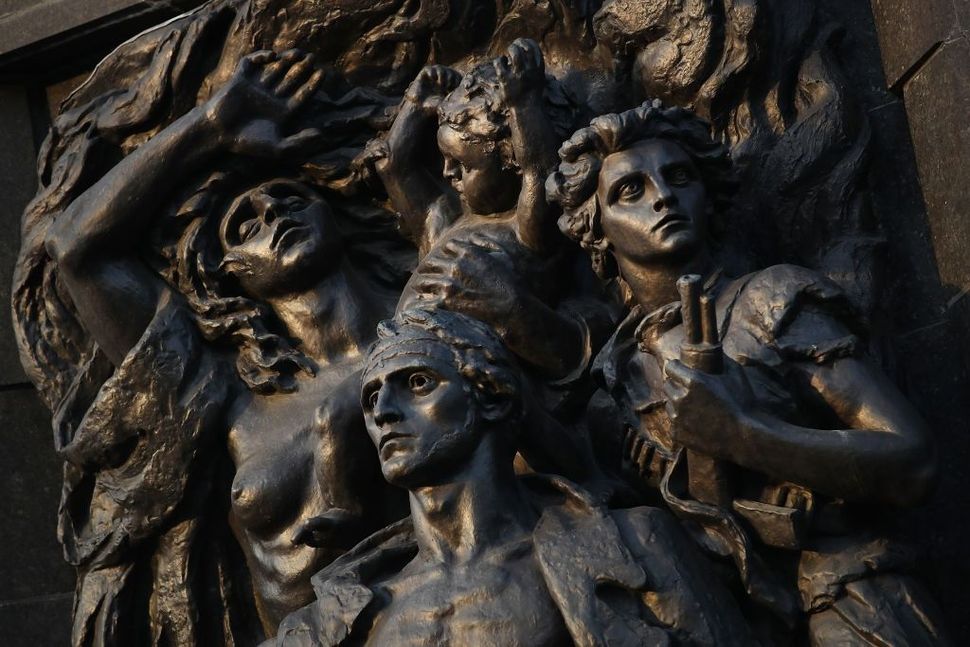 WARSAW, POLAND - APRIL 12: A memorial to the Warsaw Ghetto Uprising stands on April 12, 2018 in Warsaw, Poland. Poland will commemorate the 75th anniversary of the Warsaw Ghetto Uprising on April 19. The Warsaw Ghetto was a prison created by the German military during its occupation of Warsaw during World War II. Starting in 1940, 400,000 Jews were confined to a walled-in neighborhood of 3.4 square kilometers under horrific conditions. With assistance from Polish partisans the Jews rose up in armed resistance in 1943 and held off the Germans for several weeks until the Germans annihilated the ghetto, killing 13,000 people. In all 392,000 Jews from the Warsaw ghetto were killed, most of them after deportation to the Treblinka death camp. (Photo by Sean Gallup/Getty Images) Image by Getty Images

Sometime in 1943, a 35-year-old architect sat at a drafting desk on the third floor of the headquarters building in the infamous Janowska concentration camp in Lviv in what is now Ukraine. Over 80,000 Jews were murdered at this camp and it served as the main deportation center for 160,000 Jews of Lviv (a number which exceeded the entire Jewish population of the Netherlands).

In between doodling and planning the construction of mundane camp structures, this man, Zeev Porath, gazed out over a panorama of horror. Every day Porath was an unwilling audience to performances of unspeakable cruelty. From his elevated vantage point, he could witness these everyday terrors.

As a “privileged prisoner,” Porath could move relatively freely throughout the camp, past the everyday torture that characterized Janowska. He had no power to intervene. However, he did the one thing he was trained for: he could draw. 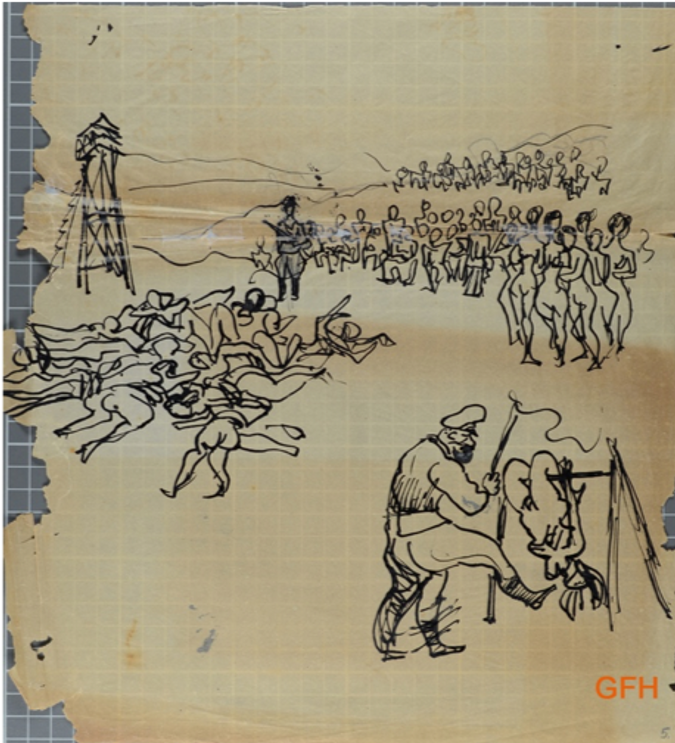 Hunched over his desk, sliding his unauthorized drawings under his official work, Porath risked his life to document the crimes around him. He himself testified that there was a “community” among the prisoners in the technical office which attempted to “remember all the incredible events in the camp in so that, if we were successful, we could reveal them to posterity.”

Porath drew 59 drawings during and immediately after his time in the camp. Unlike many pieces of Holocaust art, Porath’s works were created while he was living that nightmare. They are not abstractions or postwar attempts to make sense of the experience. On the contrary, they are evidence. These are depictions of actual events and actual perpetrators.

Porath trained at the Lviv Polytechnic University as an architect and possessed the eye and skill to document in detail the built landscape of the camp. However, his own witnessing drove him also to draw the non-architectural scenes that he found most troubling.

Take the drawing above, recently shown at an exhibition entitled “VIOLATED: Women in Holocaust and Genocide” in New York City. It depicts a naked woman tied to a sawhorse being whipped by a guard. This is a clear depiction of sexualized violence, an assault with a sexual component but without sexual contact. Porath foregrounds this event in a larger scene of a mass shooting (of women) at the camp.

To Porath, this drawing was not simple. Indeed, he drew five studies of the same scene and three focused specifically on the SS-man. 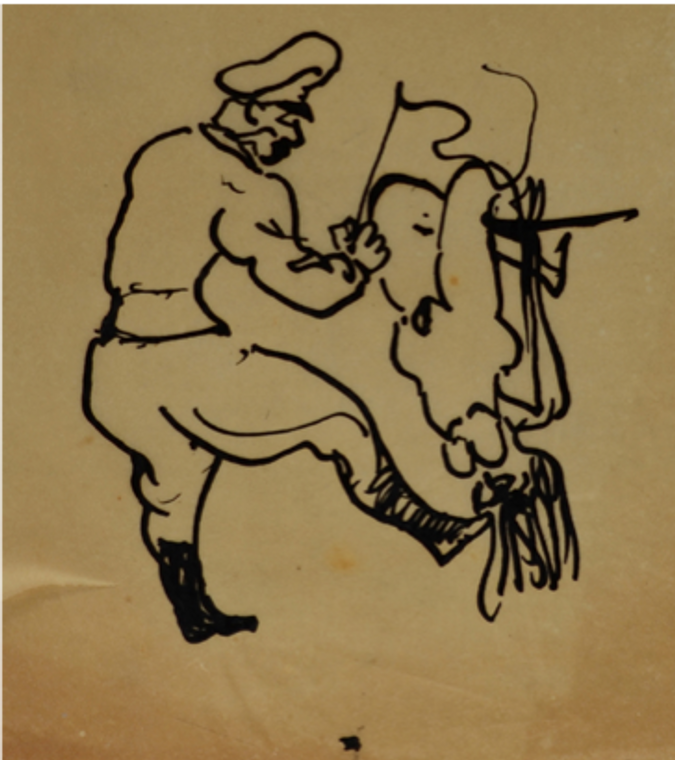 This moment haunted him. In the larger picture, he scratches out the original position of the left leg, perhaps to better illustrate the kicking motion. Moreover, based on the appearance of this guard, it is likely that the figure is not unknown, but is Richard Rokita, an infamous sadist in the camp. 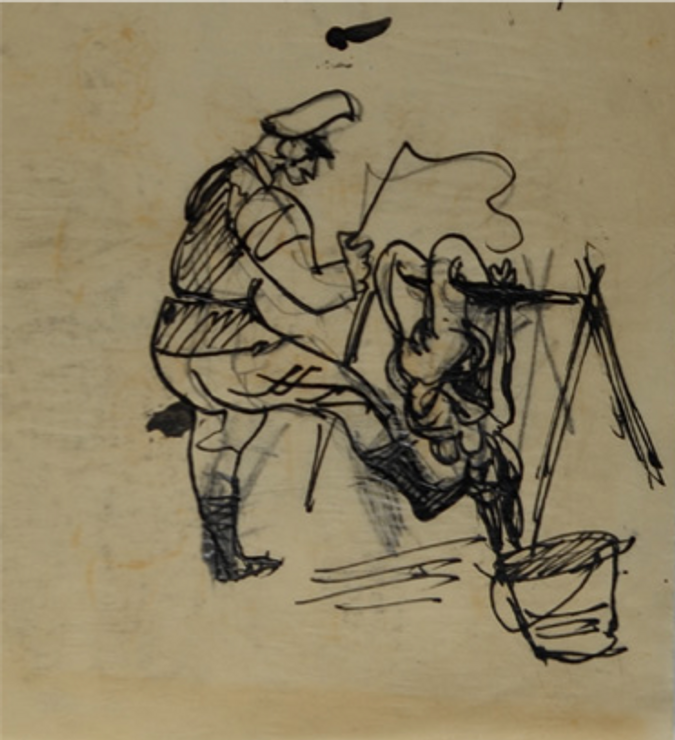 Porath draws Rokita again during an execution that he personally witnessed. But Porath’s drawings of events in the camp frequently fixate on violence against women. These scenes seem to have been most disturbing to him. They open up an historical window into a body of extensive testimony about sexual and sexualized violence that has remained largely hidden by the relative obscurity of the Janowska camp itself.

Rokita and other guards routinely stripped women naked and whipped them or forced them to have sex. One survivor recalled that Rokita had a “barnyard sexuality.” Another survivor wrote that raping Jewish women was Rokita’s “weakness.”

Rokita was not the only rapist and Porath knew this as well. The camp laundry was run by SS-man Peter Blum, a notorious sexual predator. He staffed his workshop with “pretty Jewish women” who were “raped and later shot” according to another survivor. Porath, too, remembered that it was widely known that Blum “sexually abused women, in spite of the Nuremburg laws.” He also personally witnessed Rokita murder his former landlady and her daughter as he tried to smuggle food to them and repeatedly saw women he knew stripped naked and beaten.

Zeev Porath’s collection in the Ghetto Fighter’s House Museum consists of 59 drawings. Thirty of them are portraits or sketches of events like the beatings shown here. Of those 30, 11 depict women. When drawing executions and brutality, six out of 11 drawings focus on women. It seems likely that the treatment of women in the Janowska camp was so transgressive and painful to Porath, both because of personal connections and his humanity, that he was compelled to draw them over and over. 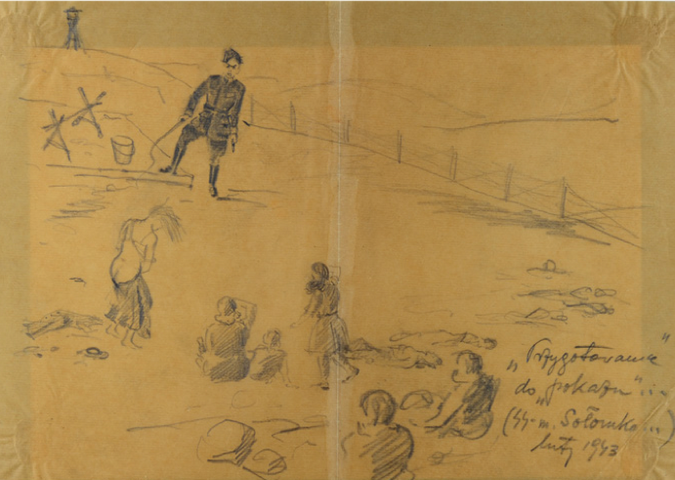 Two things make Porath’s work incredibly significant to our understanding of sexual violence in the Holocaust. First, he produced his drawings while still a prisoner — a rare occurrence. Second, his art can also be rightly considered testimony, as he is drawing specific individuals and specific, verifiable events that were seared into his memory. This is not to suggest that art about the Holocaust created in other circumstances is less valuable. Porath’s drawings simply offer us a different and powerful perspective that is firmly grounded in the tragic history of the Holocaust.

Sexual violence against Jewish women was a common occurrence in the Janowska camp as countless testimonies prove. Indeed, such violence occurred in all areas of the Holocaust, not just the camps. Women were raped by their “rescuers” and at mass killing sites. They were forced into brothels run by the German military. German soldiers themselves committed rape frequently as I discovered in the research for my first book.

As they were stripped of clothes and valuables, so, too, the Nazis stripped them of their dignity, despite lofty ideals of racial purity.

Rape accompanies genocide almost as a matter of course, whether as an intentional tool of dominance or as a byproduct of the normalization of criminality. The dehumanization of mass murder not only dehumanizes the victims, but also makes women into objects in the eyes of the perpetrators.

Raising awareness of sexual violence in the Holocaust is incredibly important work, highlighting the often-unseen victims of genocide. While the extent of sexual and sexualized violence against Jewish women may not be common knowledge to the public, this topic has received attention from some scholars who deserve recognition.

Notably, Rochelle Saidel (who helped put together the exhibit), Sonja Hedgepeth, Regina Muhlhäuser, Anita Grossman, Beverly Chalmers, Anna Hájková and many other scholars have investigated this difficult and fraught topic. Researchers have had to overcome a variety of powerful obstacles. Many Jewish women who were assaulted felt guilty or ashamed.

In addition, for most women of that time, particularly Orthodox women, discussions of sexuality in general were taboo. As a result, many Holocaust survivors were incredibly reluctant to discuss sexual violence. Many interviewers lacked the training or willingness to pursue such topics while conducting oral histories. Even postwar judicial investigations often ignored rape.

These obstacles combined with a relative lack of archival or documentary sources to further impede research into sexual violence in the Holocaust.

Finally, and perhaps most shamefully, even the historical community at times seemed to find rape a topic that was tangential to more important issues. As recently as 2011, renowned Holocaust scholar Lawrence Langer told CNN that “the historical significance is very small in the context of the Holocaust experience.”

Such a dismissive position is shocking from an otherwise highly sensitive and well-regarded scholar. Thus, it is not surprising that Batya Ungar-Sargon asked in an article in The Forward, “Can we talk about rape in the Holocaust yet?”

Dr. Waitman Wade Beorn is a Lecturer in the Corcoran Department of History at the University of Virginia. He is the author of Marching Into Darkness: The Wehrmacht and the Holocaust in Belarus (Harvard, 2014) and The Holocaust in Eastern Europe: At the Epicenter of the Final Solution (Bloomsbury Academic, 2018). He is currently working on a book project exploring the Janowska Camp and the Holocaust in Lviv.

Dr. Waitman Wade Beorn is a Lecturer in the Corcoran Department of History at the University of Virginia. He is the author of Marching Into Darkness: The Wehrmacht and the Holocaust in Belarus (Harvard, 2014) and The Holocaust in Eastern Europe: At the Epicenter of the Final Solution (Bloomsbury Academic, 2018). He is currently working on a book project exploring the Janowska Camp and the Holocaust in Lviv.

Zeev Porath Chronicled Nazi Rapists And Other Atrocities – In His Drawings