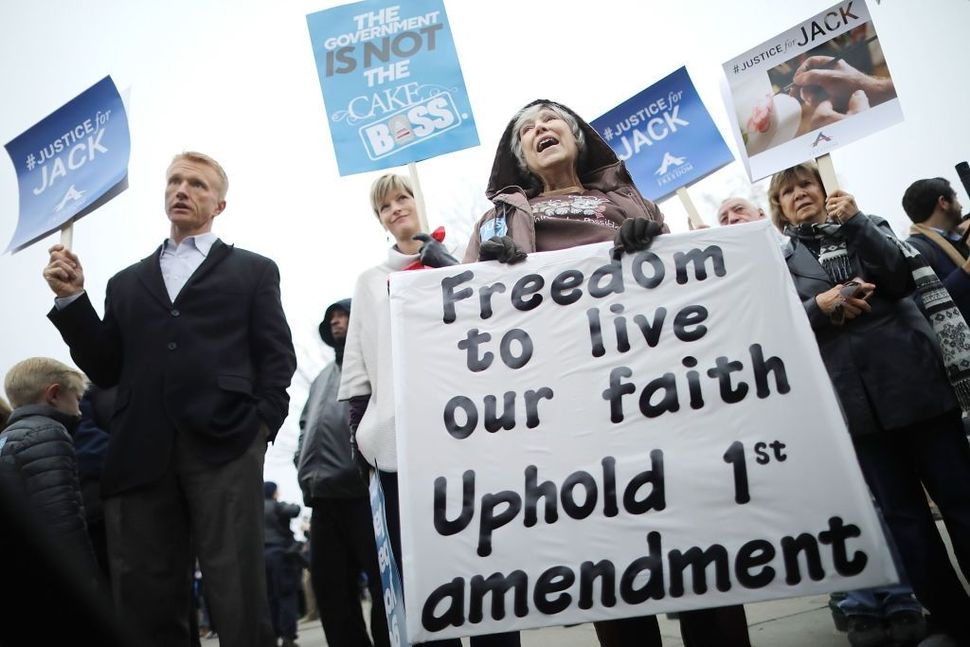 WASHINGTON, DC - DECEMBER 05: Protesters rally in front of the Supreme Court building on the day the court is to hear the case Masterpiece Cakeshop v. Colorado Civil Rights Commission December 5, 2017 in Washington, DC. Charlie Craig and Dave Mullins filed a complaint with the commission after conservative Christian baker Jack Phillips refused to sell them a wedding cake for their same-sex ceremony. (Photo by Chip Somodevilla/Getty Images) Image by Getty Images

The U.S. Supreme Court ruled on Monday that the Colorado Civil Rights Commission demonstrated hostility to religion in the case of the Colorado baker who declined to bake a special cake for a wedding of two men. It did not, however, address the issue most important to both sides in the case.

That would be the placement of the line between unlawful discrimination on the basis of sexual identity and the First Amendment’s “free exercise” protection of citizens’ religious freedom.

Nor did it, or perhaps could it, address the larger issue of the increasing disdain in American society for religious Americans seeking to exercise their Constitutional right to their faiths and to engage in “the free exercise thereof.”

What the 7-2 high court ruling did decide was that Jack Phillips, the baker who politely refused the baking request in 2012, had not been treated fairly. Justice Anthony Kennedy, who authored the ruling, wrote that while Colorado law “can protect gay persons in acquiring products and services on the same terms and conditions that are offered to other members of the public, the law must be applied in a manner that is neutral toward religion.” And Mr. Phillips’ religious conviction, the Court ruled, had not been so treated.

Justice Kennedy cited the Colorado commission’s decision allowing a different baker to refuse to put an anti-gay message on a cake, implying that what’s good for the baker is good for… the other baker.

“The outcome of cases like this in other circumstances,” though, he took pains to add, “must await further elaboration in the courts, all in the context of recognizing that these disputes must be resolved with tolerance, without undue disrespect to sincere religious beliefs, and without subjecting gay persons to indignities when they seek goods and services in an open market.”

The final fine-drawing of the discrimination-religious freedom line thus lies in the future. But standing firmly and most pointedly in the present is Justice Kennedy’s judgment that the Colorado Civil Rights Commission seemed “neither tolerant nor respectful of Mr. Phillips’ religious beliefs.”

The Colorado Civil Rights Commission may be a prominent sore thumb, but it is emblematic of that larger issue, the growing societal disdain for traditionally religious citizens, who are routinely derided as “bigots” for seeking to live their lives in accord with their religious ideals.

It’s nothing new. Back in 1998 an op-ed page ad in the New York Times, signed on behalf of the American Civil Liberties Union by its then-executive director Ira Glasser, equated religious people to ugly racists of old and demanded in all-caps to know: “SINCE WHEN IS BIGOTRY A MORAL VIRTUE?”

More recently, in 2015, delivering the keynote address at the annual Women in the World Summit in New York City, Hillary Rodham Clinton declared that “deep seated cultural codes, religious beliefs and structural biases have to be changed.”

And last year, California assembly member Al Muratsuchi declared that it’s time for the “faith community” to “evolve with the times.”

And the attacks on religious convictions are only escalating. It wasn’t hard to find bloggers’ headlines right after this week’s Supreme Court decision, like “Bigots rejoice over SCOTUS ruling.”

Not only is the name calling increasing, but so are pressure tactics aimed at forcing state and local governments to, in effect, endorse the bigotry narrative.

In 2015, New York Governor Andrew Cuomo similarly banned non-essential state travel to Indiana because of that state’s law prohibiting the impinging on a person’s religious convictions without a compelling justification.

And who can forget (well, at least outside the Orthodox Jewish community) how, in 2012, then-Mayor Michael Bloomberg, in the context of a different religious freedom issue, boasted of his standing up to a group of religious New Yorkers, exclaiming that “I think it’s fair to say that nobody else would take that on. I mean, come on! Who wants to have 10,000 guys in black hats outside your office, screaming?”

And so it goes.

Religious Americans are being lectured about tolerance. But forcing a citizen who has a sincere religious objection to same-sex marriage to, in effect, participate in the celebration of one should make us realize that there is another side to the tolerance issue. And it takes two sides to make a coin.