Linda Sarsour Is Not Our Enemy 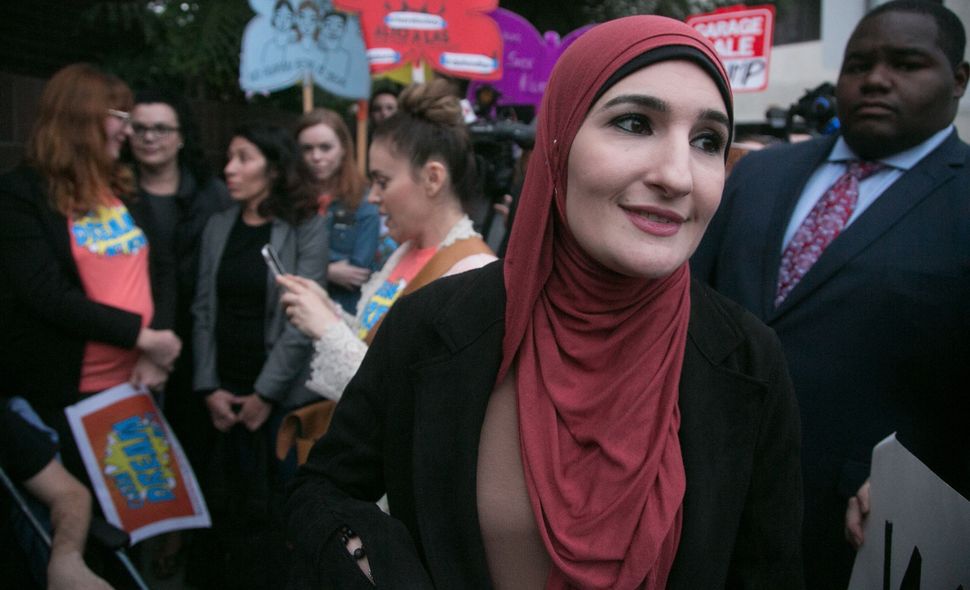 How far are American Jews willing to go to discredit those perceived as adversaries of Israel? Are we ready to condone down and dirty investigations to dredge up compromising material on people sometimes inappropriately labelled as “enemies”? Conversely, might not constructive engagement be a more effective tactic than scorched earth attacks vis-a-vis fellow Americans with whom we disagree on Israel, but with whom we may have common interests on important domestic issues?

Case in point: the ever-more toxic relationship between the organized Jewish community and Linda Sarsour, a Palestinian-American activist and supporter of BDS, as well as an organizer and public face of the 2017 Women’s March in Washington, the largest demonstration in modern American history.

On May 25, Haaretz published an article revealing that a secretive Israeli firm collected intelligence on Sarsour and her family on behalf of an American organization dedicated to combating the BDS movement. According to Haaretz, the firm in question, Israel Cyber Shield, delivered a dossier on Sarsour to an American pro-Israel organization called Act.IL, the CEO of which confirmed receiving anti-Sarsour material from ICS.

Haaretz revealed that the ICS material contained information on Sarsour’s parents, as well as legal information related to a court case in which she was involved. Act.IL, a Sheldon Adelson-funded organization, used the information to prepare a letter, to be distributed by supporters using its App, to pressure U.S. colleges and universities to prevent Sarsour from making speaking appearances on their campuses.

Then there was the revelation in the New York Times that Donald Trump Jr. met in August, 2016 with emissaries for the crown princes of Saudi Arabia and the United Arab Emirates, together with Joel Zamel, an Israeli specialist in social media manipulation. At the time of the meeting with Trump Jr., the Times reported, Zamel’s firm “had already drawn up a multimillion-dollar proposal for a social media manipulation effort to help elect Mr. Trump.”

When I expressed concern on Facebook about the wrongness of a shadowy intelligence firm digging into Linda Sarsour’s personal life, one interlocutor blithely rejoined that ICS’ investigation of Sarosur amounts to opposition research and therefore standard-operating-procedure these days. Others insisted that Sarsour has proven herself to be an enemy of the Jews and therefore deserves whatever she gets.

Yet Sarsour is not running for office; so what is the justification to target her for ‘oppo’ research? Furthermore, I do not consider Sarsour to be an irredeemable enemy of American Jewry any more than onetime bete noires like Jesse Jackson or Al Sharpton. Yes, she is a proud Palestinian-American and her views on Israel are markedly different than most American Jews. I personally take umbrage at her statement last year that supporters of Israel cannot be feminists, and at an insidious rant at a 2015 Nation of Islam sponsored rally that “the same people who justify the massacres of Palestinian people… are the same people who justify the murder of young Black men and women.”

On the other hand, Sarsour not only played an inspirational role during the Women’s March and is admired by legions of women across the country, but last year she also initiated a successful fund-raising campaign to repair headstones desecrated during hateful attacks on Jewish cemeteries around the U.S. That was a positive gesture that should not be sneeringly dismissed as disingenuous.

If we are to build an effective coalition to fight anti-Semitism, Islamophobia, racism and misogyny at a time when President Trump is legitimizing all of the above, it is counter-productive for Jews to sanction a smear-campaign against a potentially valuable ally.

Linda Sarsour, a potential ally? Absolutely! We can agree to disagree with her on aspects of the Israeli-Palestinian conflict and offer to dialogue respectfully as to why some of her statements have been wrong and hurtful to Jews. At the same time, we should express appreciation for Sarsour’s effort to restore ravaged Jewish cemeteries and include her among American Muslim leaders with whom we are ready to cooperate in fighting bigotry in America.

Most fundamentally, we must say an emphatic ‘no’ to the sordid intelligence campaign against Sarsour being carried out in our name. She and her family simply do not deserve to have their personal lives picked over in order to dig up dirt for use against her. That is way over the line of decency, and Jews of conscience, no matter what their take on Sarsour’s politics, should call it out.

Walter Ruby is Chairman of the Greater-Washington Muslim-Jewish Forum.

Linda Sarsour Is Not Our Enemy