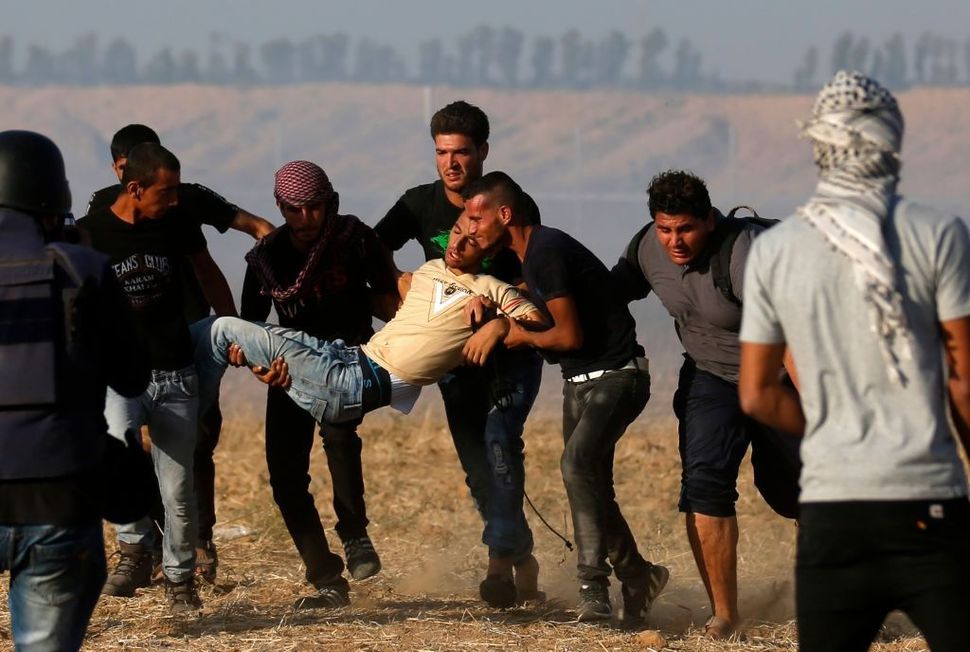 Palestinian protesters carry away an injured comrade during a demonstration along the border with Israel, east of Khan Yunis in the southern Gaza Strip on June 5, 2018. (Photo by Said KHATIB / AFP) (Photo credit should read SAID KHATIB/AFP/Getty Images) Image by Getty Images

The front-page photos and nightly news reports of the killings at the Gaza/Israel border have faded; the issues that fueled the confrontation have not.

That the lives of 119 Gazans have been lost and thousands more unalterably changed is horrific. It will be just as tragic if the history of Gaza and the truth is buried along with those killed.

While the lull in violence brings relief to those in the Middle East, it also provides time to challenge the myths perpetuated by Prime Minister Netanyahu, President Trump and others, and to understand the truth, the reality of the conflict, in pursuit of a policy that has a chance of achieving the peace that all purport to seek.

Myth one: Gaza is the natural home of Palestinians that Israel captured in 1967 and withdrew from in 2005.

While Gaza is now home to 1.8 million Palestinians, it is not their natural home. Nearly two-thirds of the population are those, or descendants of those, who fled Israel in terror and whose homes were seized by Israeli forces in 1948 or 1967.

After Israel captured Gaza in 1967, all movement in and out was controlled by Israel. Although Israelis could move into Gaza, with government support, Palestinians were prohibited from moving to Israel.

In the 40 years from 1967 to 2005 that Israel controlled Gaza directly, the century-old Palestinian agricultural economy was deliberately weakened. Additionally, dependency on Israel was created through the appropriation of 40% of the arable lands; Israeli control of resources, including access to water; control of all trade and goods entering or leaving the country; and even denial of the right of Palestinians to plant citrus trees.

Myth two: Israel has always supported Gazan independence, as evidenced by Sharon’s removal of settlers and troops in 2005, and only Hamas’ mismanagement and provocation causes demonstrations.

When Ariel Sharon repatriated 8,000 Israeli settlers (among more than 1 million Palestinian Gazans) in 2005, he did so for the benefit of Israelis, not as a gift to the Palestinians.

Not only did Sharon never negotiate an agreement to leave Gaza with his counterpart, Palestinian Authority President Mahmoud Abbas, he pulled up stakes, locked the gates behind him, and threw the key into the Mediterranean Sea.

The inhabitants of Gaza might have had the over-crowded land and structures, but Israel maintained full control of the air above (all radio, cell phone and internet capacity), the sea beyond (Israel patrolled and claimed sovereignty over the Mediterranean Sea) and the land surrounding the territory. Israel, with the help of Egypt, controlled the entrance and exits, all imports and exports, and access to water and electricity — essential for basic human needs such as heat and lights, potable water and sewage treatment.

After Hamas took control of Gaza in 2007, isolation and privation were heightened by an Israeli-mandated blockade. No Gazan or Gazan-made item could leave without Israeli permission, and no foreign goods—humanitarian supplies, medicine, books or food could enter by land, air or sea. What Gaza is today is what the U.N., Human Rights Watch, Amnesty International and others have called the world’s largest “open-air prison.”

Myth three: Israel must protect itself because Hamas, the PLO and Palestinians are dedicated to its destruction.

Hamas has been the sworn enemy of Israel for decades, and certainly urges resistance. However, those who have been to or know Gaza — Jews and Palestinians alike — understand that it is the prison camp-like conditions and Israel’s de facto occupation that breed protest.

By the time Sharon led Israel’s 8,000 settlers out of Gaza, the PLO and Fatah had already acknowledged or recognized the State of Israel: in 1988, at the 1991 Madrid Conference, in the 1993 Oslo Accords and in UN Resolutions 242 and 338. Even Hamas, in its agreement to form a unity government with the PLO, was willing to abandon its historic stance and recognize Israel’s right to exist. Ironically, Netanyahu, who had previously said he could not negotiate with Palestinians because of the split between PLO and Hamas, immediately changed his tune and said he now would not negotiate with such a government because it contained terrorists.

What is clear is that it is neither the storming of the border nor the crude rockets of Hamas and others that present the greatest threat to Israel.

Certainly, people will protest, and many proclaim the “right to return,” as refugees do throughout the world. Most Gazans, however, are consumed by the daily routine of scrambling for employment, food, potable water, electricity and gas where little is available due to Israel’s hostile prevention of the flow of goods, services and people.

In reality, that same occupation and blockade that deprives the people of Gaza of the basics of daily life may be a far greater threat to Israel. While Army controls and barriers can prevent the movement of people, they cannot prevent the untreated, sewage-filled water from traveling the Mediterranean to the beaches and water systems of Tel Aviv. And they cannot keep the toxic air from the burning of tires on the streets of Gaza City from drifting to the fields and towns of Israel. They cannot keep the stain of immoral acts against other human beings from tainting the standing of the state of Israel among nations with integrity, empathy and humanity.

We have a chance to help refigure the future, to end what appears to be endless war for a rational peace. This can only happen if we remember that peace must be secured with justice, and that justice requires that we honor rather than deny the truth of the present and the past, however painful or discomforting.

Jim Klutznick is Chair of Americans for Peace Now, and Marilyn Katz is on the J Street National Board.