The OU Should Stick To Kosher Laws – Or Become Treif 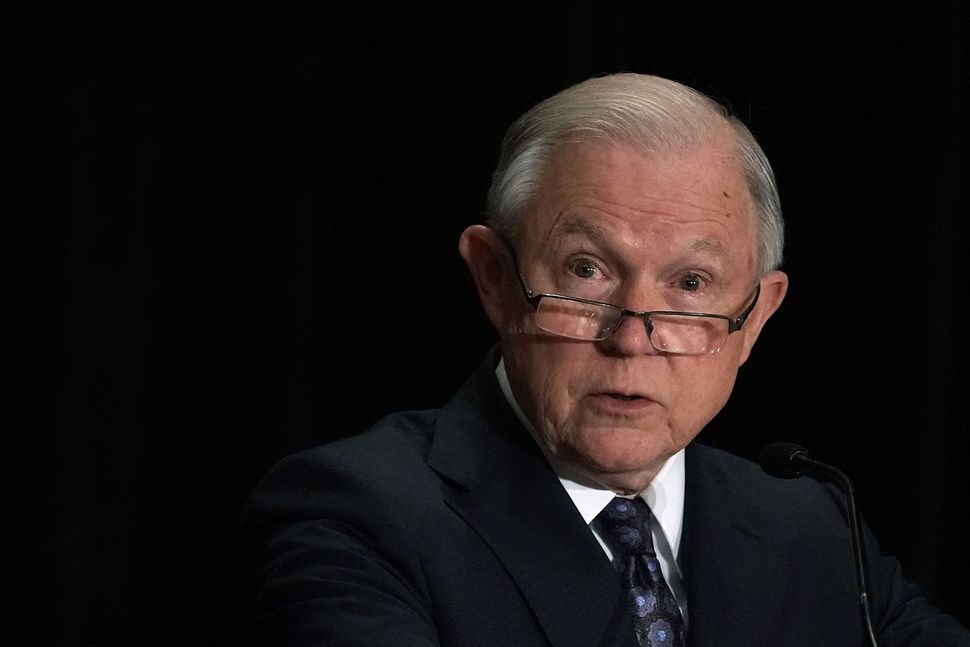 The Orthodox Union has a branding problem.

This week, Attorney General Jeff Sessions spoke at their Advocacy Center’s annual Leadership Mission, amid protests over the policy, which Sessions created and presides over, of separating masses of children from their parents at the United States border. At the OU conference, Sessions enthusiastically endorsed the Supreme Court’s decision to support a Christian baker who refused to make a cake for a gay couple—a decision the OU had already praised.

Now, note that I’m not saying the OU has a moral or theological problem. Sure, it turns my stomach to see them present a plaque engraved, “Justice, justice shall you pursue” to a man who built his career on intimidating African American voters, allegedly called a Black colleague “boy,” and received “F” grades from the NAACP, a man who recently eliminated asylum for victims of domestic violence.

I am not nearly as learned as the rabbis of the OU, but that is not how I had interpreted Deuteronomy. Still, ultimately they will have to choose for themselves, consulting their consciences and the relevant religious authorities, whether or not they understand Orthodox Judaism to be compatible with homophobia and child-kidnapping.

No, I’m talking about something else: their business.

You see, the OU is an odd, hybrid organization. On the one hand, it is an Orthodox rabbinical organization which serves Orthodox congregations, runs an Orthodox youth group, and advocates for Orthodox interests (mostly a hawkish Israel policy) in Washington. On the other hand, it is a kashrut supervision agency, which certifies more than 80,000 products in over 100 countries. Those two projects are not at all the same, and if the OU continues pivoting to the right, they will come into tension.

The Orthodox community is small, tight-knit, and highly ideological. (Though even it is diverse: we shouldn’t forget, even if the OU has, that there are all sorts of Orthodox Jews—including LGBT folks and political liberals.) By contrast, the global market for kosher food is huge, growing to over $24 billion in 2017, and on pace to double in the next decade.

As is well known, many Americans buy kosher food who don’t keep kosher. Rather, they take the “hekhsher,” or stamp of supervision, as a sign of health, quality, or ethical propriety. (By the OU’s admission, it is none of these things.) Phyllis Koegel, OU’s marketing director—yes, they have a marketing director—claims that Muslims and Seventh Day Adventists check for an OU too. More importantly, many non-Orthodox Jewish institutions, like college Hillels, kosher caterers, Conservative synagogues, and pluralist groups of all sorts, rely on OU supervision, both because they dominate the market and to ensure everyone will eat their food.

In other words, the OU has a customer base that’s massive, diverse, and largely non-Orthodox. They have a thriving business, which subsidizes all the other work the OU does and thus keeps the modern Orthodox Jewish community afloat. They have a brand that is, somewhat improbably, admired and trusted by millions of people who don’t share their deep, intense religious commitments. And a brand like that is both very precious and very fragile, as anyone knows who has watched Facebook and Uber scramble to undo the damage from their recent scandals.

How are the OU’s customers going to feel about it honoring Jeff Sessions? At some point, they are going to ask whether they want child-separation branded on their baked beans and medium-sharp cheddar. They are going to remember that they wanted kosher food so that everyone could eat at their wedding—not so that a queer couple couldn’t have one. They are going to ask exactly what is so ethical or healthy about an institution whose political concerns are moving the American embassy to Jerusalem, securing the right to discriminate against LGBT people, and cozying up to Donald Trump. Those non-Orthodox Jews are going to wonder why they should outsource their kashrut to people whose Judaism is fundamentally alien to their own. And everyone is going to realize that there are hundreds of other kashrut agencies out there—many which don’t run a political lobby on the side.

The OU’s customers have all sorts of reasons to complain. But the common thread here is the peculiar, contradictory duality of its business model. The organization has two arms, which perform unrelated services for radically different groups of people.

In the long term, there’s no reason the larger, more diverse customer base of its kashrut division should or will tolerate the OU’s political conservatism. If the OU keeps up its right-wing advocacy, its courting of the Trump administration, and its endorsement of discrimination and punishing immigrant kids, I predict they will have a boycott on their hands—and they will have earned one.

Raphael Magarik is a doctoral candidate at the University of California, Berkeley.

The OU Should Stick To Kosher Laws – Or Become Treif