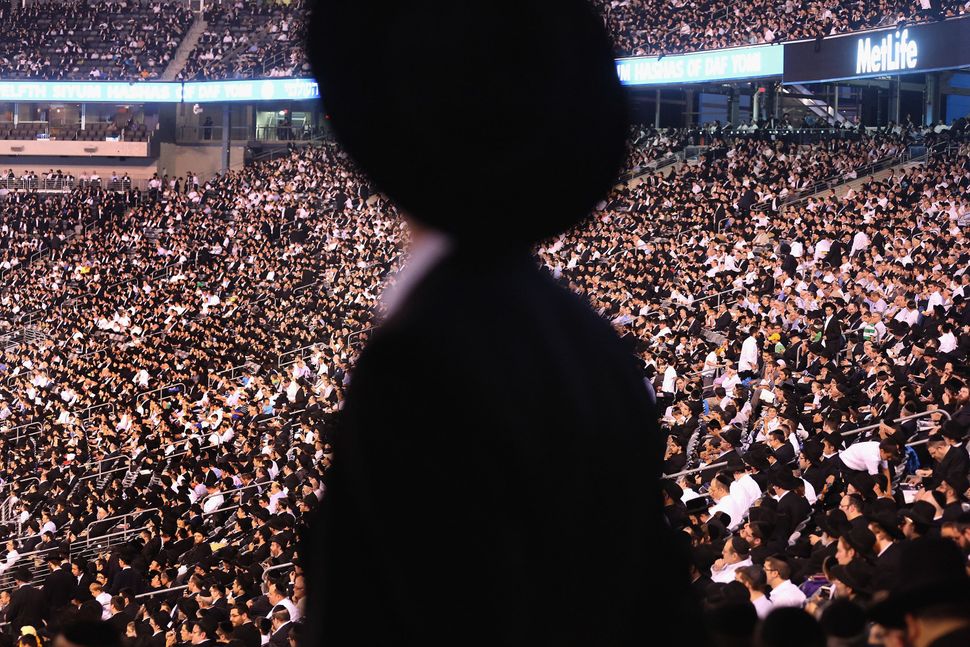 As if that weren’t bad enough, Corey Stewart, a fervent praiser of white nationalists, won his GOP primary in Virginia.

As Jews, these events should horrify us. They mark a new era of mainstreamed bigotry in the United States. No longer can we pretend that Trump’s embrace of bigotry was just a short-term strategy to win over some voters and challenge “political correctness.” Now there are children, parents and entire families suffering. There are men who would take this all further, getting mainstream support for their views among Republican voters. Besides the moral abomination, our new reality also comes packaged with a healthy dose of anti-Semitism.

And yet, for Orthodox Jews, these are not reason enough to abandon the GOP.

Despite the fact that these candidates present a real and present danger to our community, I was hard-pressed to name a single right-wing Orthodox Jew who, pursuant to these events, had changed their mind about the GOP at all.

How is it possible that Jews could be so blind to the overt anti-Semitism that is now slowly filling the ranks of the Republican party?

The easy, obvious answer is that Orthodox Jews see anti-Semitism on the left as well. And there is a lot of truth to that. Because of the left’s commitment to fighting inequality, anti-Semitism is often ignored in the movement, masked as a form of “punching up” against the powerful. So I understand why Orthodox Jews might feel unsure about the left these days, especially when supporting Israel is often considered tantamount to committing genocide.

And yet, that does not explain the Orthodox community’s unceasing, unquestioning loyalty to Republicans.

For at the end of the day, there is a huge difference between seeing the wrong in the other side — in this case, the left — and committing loyally to its opposite. The fervor of support Orthodox Jews show Republicans and Trump, whose support among the Orthodox rose since the election to 71%, can’t be explained by seeing the faults in the left.

Indeed, there is something on the right that is keeping them there and making them fervent advocates of the cause. The truth is, Republicans have hacked the Orthodox Jewish community. Like coders, they have focused on exploiting vulnerabilities in our software, finally discovering a formula for creating loyalty throughout this community in a way that has put both Orthodox Jews and other minorities in danger.

Among Orthodox Jews, there is one overarching approach to the outside world, and especially when engaging in politics: Will this help us survive? Not “us” just in the physical sense, in the sense of safety, but “us” as in the Orthodox Jewish way of life.

After generations of pogroms, a Holocaust, and now assimilation, the Orthodox way of life has been ingrained among its adherents with an urgency reserved for fighting constant, impending eradication. And the more visibly committed to Orthodoxy, whether Hasidic or Litvish Haredi, the bigger the concern that its members might stray.

This is why the mitzvahs or commandment to get married and have children is so strongly emphasized: It is the most direct approach to making sure that the Orthodox Jewish way of life stays alive. It is also why some communities have devoted themselves so fully to “kiruv,” an industry and mission focused entirely on bringing secular Jews into a more Orthodox way of life.

And this is what Republicans know and seize on, and it’s why Orthodox Jews have fallen further and further into the abyss of a party that cares little for them, far less for Jews as a whole, and uses them as pawns to validate their ever-increasing hateful rhetoric.

Jeff Sessions was recently given an award by the Orthodox Union. The plaque on which the award was granted was inscribed with the Biblical line, “Justice, justice shall you pursue.”

Many people in the liberal Orthodox group I’m part of, Torah Trumps Hate, assumed that Sessions received the award due to the Trump administration’s support of Israel. But it wasn’t: It was for his stance on “religious freedom.”

This issue isn’t a small one. In fact, Sessions used the speech at the Orthodox Union to announce the “A Place to Worship Initiative,” which is meant to increase enforcement of an initiative passed by President Clinton that makes it illegal for communities to use zoning ordinances to discriminate against houses of worship.

In his statement at the event, Sessions spoke of a federal lawsuit he had brought using that very same act against a community that had denied the application of a Chabad house that wanted to expand its synagogue.

He went on to say that “In recent years, the cultural climate has become less hospitable to people of faith and to religious belief. Many Americans have felt that their freedom to practice their faith has been under attack.”

And it is this that lies at the heart of the Republican appeal to Orthodox Jews: a feeling of being constantly under attack, not just physically but spiritually and communally. And it is this grievance that Republicans have stoked, built up, and taken advantage of.

The president of the Orthodox Union released a statement after the anger of Jews all over America reached a fever pitch over Sessions’ award. In it, he claimed that he and others in the organization were able to speak privately with Sessions to discuss his horrific immigration policy.

The idea, it seemed, was that they’d have more influence over Sessions if they first got in his good graces. This idea was emphasized in the closing paragraph of the statement:

Over the course of decades, OU leaders have met with political officials across the spectrum for the purpose of advancing our community’s values and interests – and we will continue to do so. The Orthodox Union remains committed to effective advocacy work on behalf of our community.

In other words, the OU exists to “advance our community’s values and interests.” As long as the Orthodox community’s priorities are advanced, their mission is fulfilled. The rest is commentary.

And this is how the Republican Party has hacked the Orthodox world. Unlike the Democratic Party, which must balance the needs of multiple constituencies and competing agendas, the Republican Party has promised something very simple to the strictest religious communities: They will do anything and everything to protect their way of life. It is, in many ways, the number one priority over all others.

To Orthodox Jews, who are in a constant state of both communal and self-imposed trauma, this is like hearing a message from God himself.

And if a group of anti-Semitic white nationalists are in their ranks, that’s the price they have to pay. A white nationalist who protects religious institutions and encourages Jews to move to Israel is a useful one, useful enough to be worthy of giving a plaque that celebrates them for their commitment to justice.

Because in this day and age, in this political moment, “justice” and other ethical ideals have been redefined. Justice means justice for Orthodox Jews. Mercy means mercy for Orthodox Jews. Compassion means compassion for the danger religious people find themselves in.

And for others who are neither Orthodox nor Jewish? We can talk about that privately.

Elad Nehorai is the writer behind the blog Pop Chassid, the co-founder of the creative Jewish website Hevria, and one of the leaders of Torah Trumps Hate, a new Orthodox Jewish activist organization and community. He is a columnist for the Forward.