We’re In A State Of Moral Emergency. Jews Must Join The Fight. 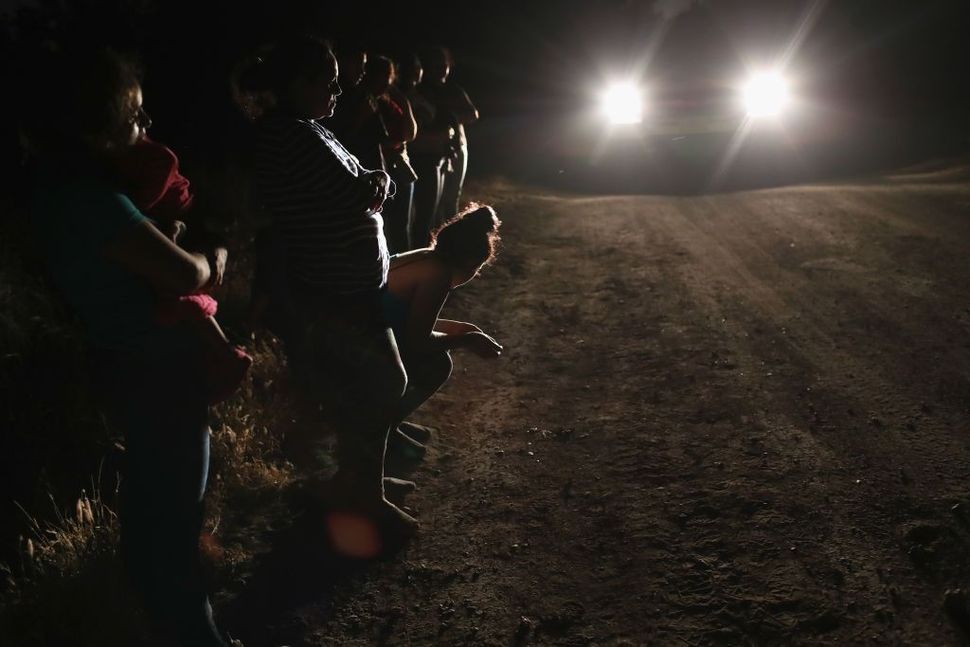 Central American asylum seekers, including a Honduran girl, 2, and her mother (L), are taken into custody near the U.S.-Mexico border on June 12, 2018 in McAllen, Texas. Image by Getty Images

I firmly believe that fighting for the human rights of immigrants and refugees is the moral responsibility of every single U.S. citizen. Recognizing this inalienable truth — that protecting the most vulnerable among us is our collective duty — has never been more urgent.

The Jewish story is also one of immigration and of forced movement. But while there are many legitimate parallels that political scientists and scholars have drawn between Trump and Hitler, the power of Jewish people to influence the present crisis does not solely lie in the Holocaust. As Jews, we are empowered to reclaim our stories and use them to defend the vulnerable. Our religion commands us to “welcome the stranger.” This is because the story of the Jewish people is an epic one of endurance in the face of perpetual estrangement, constant immigration, forced scattering and unending rejection. The American Jewish community is uniquely positioned to help solve the current crisis in our midst.

The ways that our history empowers us to speak out in support of immigrants and refugees comes as no surprise to most of us. We’ve all heard and reflected upon it many times. As a product of the Atlantic world, and a descendant of the colonized and enslaved, I can tell you that country has always been in a state of moral emergency. This is only the most recent iteration of what the American experiment has been since its inception — an exercise in unmeasurable brutality, genocide and exploitation. Recognizing this forces one to face a brutally ironic truth: Many of the Latinx individuals being forcibly deported and killed by immigration officials are roses that grew out of concrete — descended from the survivors of the brutal Native American genocide. They were never meant to survive, and now the policies of this government are deliberately enforcing more cruelty upon them.

There are many Jewish organizations that have been fighting against racism and oppressive policies for decades, but now is a pivotal moment in time. The Washington Director of Bend the Arc, Rabbi Jason Kimelman-Block, said in a statement that “President Trump and Attorney General Sessions have consistently scapegoated and demonized immigrants. Their policies, most notoriously the ending of DACA, and the ‘zero tolerance’ policy at the border, have inflicted physical, mental and emotional harm on immigrants. When we see families being torn apart and children in mass detention centers, it is time to declare a state of moral emergency and mobilize in clear opposition.” We are inundated with stories of children being lost in the void of human trafficking, with families being torn apart, with a pizza delivery worker being reported by the military officers he delivered pizza to and of squalid camps and detention facilities. We are confronted with stories of rampant sexual violence, with churches, hospitals and schools being raided, and with an indigenous women being murdered by Border Patrol officers. Reckless and irresponsible cruelty is now policy. We have all the information we need. What remains is for us to make the choice to act.

As Jews, we too, are roses that grew out of concrete. It seems that for millennia, nearly every government, every empire, tried to extinguish our light… leading our ancestors to roam perpetually, searching for unaccustomed ground — a place where they and their children might know peace and stability.

And the immigrants and refugees of this country are indeed among the most vulnerable. On February 20th, the rules that protected victims and witnesses of crime were terminated, making it easier for sexual predators to target immigrant women and men, knowing that they will not report for fear of being deported. There are more than 1 million LGBTQ adult immigrants in the U.S. Without documents or societal protection, immigrants and refugees are at a higher risk for being victims of human trafficking, especially young children. Refugees who are fleeing religious persecution, face death if returned to their countries of origin. These refugees, like Persian Jews, are also deeply affected by the current climate. William Mehrvarz, a Persian Jew living in New York City, told me that he is fearful for his future, stating, “It breaks my heart and makes my blood boil when [Jeff Sessions] quotes the Bible to justify deportation. I fear for myself as an asylum seeker… will this happen to me?”

The dangerous intersections are seemingly unending. Without access to health care, immigrants face shorter life spans and the risk of death from preventable conditions and treatable illnesses. Without labor laws to protect them, immigrants are more vulnerable to devastating work accidents with no compensation.

We must stop this unconscionable cruelty, but we must also fight for radical immigration reform that empowers immigrants and refugees with their rights — their human rights to access services, be free from violence, and to use their voices as part of our community.

As Jews, we have the opportunity to speak truth to power. The world has co-opted our struggles for their own shallow purposes, why not arm ourselves with our stories in the pursuit of tzedek, justice?

We must stand against our brothers and sisters who shame our cause, like the Orthodox Union, which recently honored the immoral, racist, and cruel Jeff Sessions (who is directly responsible for the family separation policy) as a champion of justice. We must use our voices — and in some cases, our privilege, to begin to right these wrongs. Recently the OU added their name to a letter condemning the family separation policy, but we must demand that our organizations display more commitment to fighting in this latest moral emergency.

Kimelman-Block agrees that inaction or apathy would be detrimental. He told me that “We plan to continue the important work of organizing our communities against these policies in the days and weeks ahead. We must not be silent in the face of this moral crisis; if we do, the administration’s violence against immigrants will only become more severe.”

As a people that was almost lost to the void, as a people who thrived in the face of impossible circumstances, let us now take up the mantle of justice that our leaders have abandoned. Join organizations like Bend the Arc, T’ruah and the Religious Action Center. Write to your representatives and defend your neighbors.

For the world is broken, and we are commanded to repair it.

We’re In A State Of Moral Emergency. Jews Must Join The Fight.