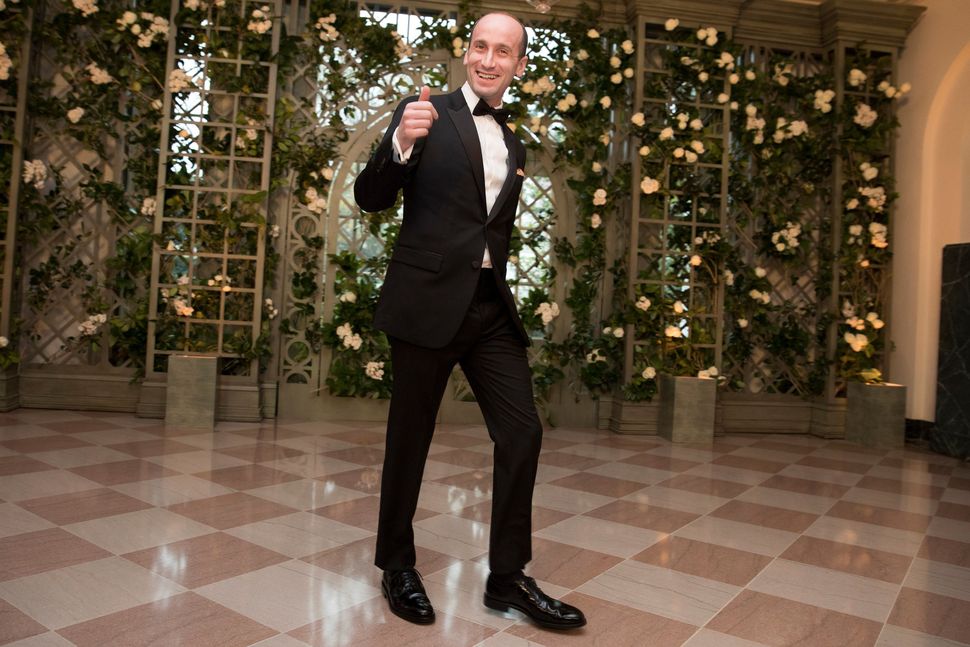 What would that mean? Would it make a difference? Would he even notice?

The 32-year-old White House senior policy adviser is in the news once again, this time offering a full-throated endorsement of the Trump administration’s decision to separate families seeking refuge on our southern border. The practice is so morally repugnant that even stalwart members of the president’s own party are denouncing it — though not nearly enough yet to make a genuine difference.

And there is Miller, perhaps the most powerful Jew in this administration outside members of the Trump family, defending the policy without a hint of hesitation or misgivings.

“No nation can have the policy that whole classes of people are immune from immigration law or enforcement,” he told The New York Times last week. “It was a simple decision by the administration to have a zero tolerance policy for illegal entry, period. The message is that no one is exempt from immigration law.”

Give Miller this: At least he owns it. President Trump, his press secretary, even his wife, are falsely blaming Democrats (or “both sides,” in Melania’s formulation) for the horrific situation, willfully ignoring the fact that the administration chose to interpret the law so that children are ripped from their families and languishing in cages — all in the name of deterrence. By contrast, Miller seems proud of the shameful situation and the humanitarian chaos it is causing.

This is all in keeping with Miller’s worldview, threaded through the bleak and foreboding Trump inaugural speech he helped to write, undergirding the Muslim ban he gleefully promoted and tried to enforce. It is a worldview that is nasty and unforgiving, devoid of hope, optimism and generosity, and so at odds with Jewish values and experiences that it’s hard to fathom this guy really had a bar mitzvah.

Last year, the Hollywood Reporter tracked down the rabbi of the Santa Monica synagogue where the Miller family were members, even publishing the typically dorky photograph of his confirmation class. “We did our best here to teach Stephen the ethical standards of Judaism,” Rabbi Jeff Marx was quoted as saying, and you could almost hear him sigh.

As has been reported, Miller presented himself as a provocateur beginning in high school, an angry political conservative in a sea of California multicultural liberalism, offending other students and the school authorities with glee, and becoming the young darling of right wing talk radio.

His oppositional perspective only hardened at Duke University, where he championed extremist causes and interacted with the white nationalist Richard Spencer. From there he worked on Capitol Hill for Michele Bachmann and John Shadegg in the House, and then Jeff Sessions in the Senate, where he was instrumental in stopping the bipartisan immigration reform which nearly passed in 2013.

Miller joined the Trump campaign in January 2016 and the administration the following year. There are photos of him with Trump’s senior White House staff in those early, heady days. He’s the only one still employed in the West Wing.

All along, he has pushed for an America that privileges white nationalism with unstinting, cheerless determination, consistently defending Trump — whom he calls a “political genius” — even when his positions are deeply unpopular. Even when his own family denounces him.

And they should know. Because the deep hypocrisy underlying Stephen Miller’s dangerous ascent is that he is willfully ignoring his own history. His mother’s family, the Glossers, fled persecution in Belarus in 1903, and built a chain of department and discount stores in Johnstown, Pennsylvania that catapulted them into the upper middle class.

“My nephew and I must both reflect long and hard on one awful truth. If in the early 20th century the USA had built a wall against poor desperate ignorant immigrants of a different religion, like the Glossers, all of us would have gone up the crematoria chimneys with the other six million kinsmen whom we can never know.”

Being a Jew is about respecting historical memory. It is about exercising responsibility to each other and, by extension, to others who require empathy and assistance. We are admonished to protect the stranger, to recognize that there is one law for residents and aliens alike, to treat others as we wish to be treated. This isn’t liberal or conservative, left wing or right. It’s foundational. These are values shared by Jews across the political spectrum, who may differ on their responses and policy proposals but still adhere to a basic respect for human dignity.

I don’t see how Stephen Miller is part of this community.

Perhaps he doesn’t want to be. That’s up to him, and there’s no indication that he does care about other Jews or even other Americans beyond the narrow share who support his beloved president.

But even if it changes him not one iota, even if it feeds his perverse sense of victimization, we still should say: You are not one of us. Not when you promulgate dehumanizing policies that violate Jewish values.

We don’t need to officially excommunicate someone to distance ourselves from him in the strongest way possible. And that’s what must happen in the shameful case of Stephen Miller.