Yossi Klein Halevi Asks Me To Recognize His Humanity. Can He Do The Same For Me? 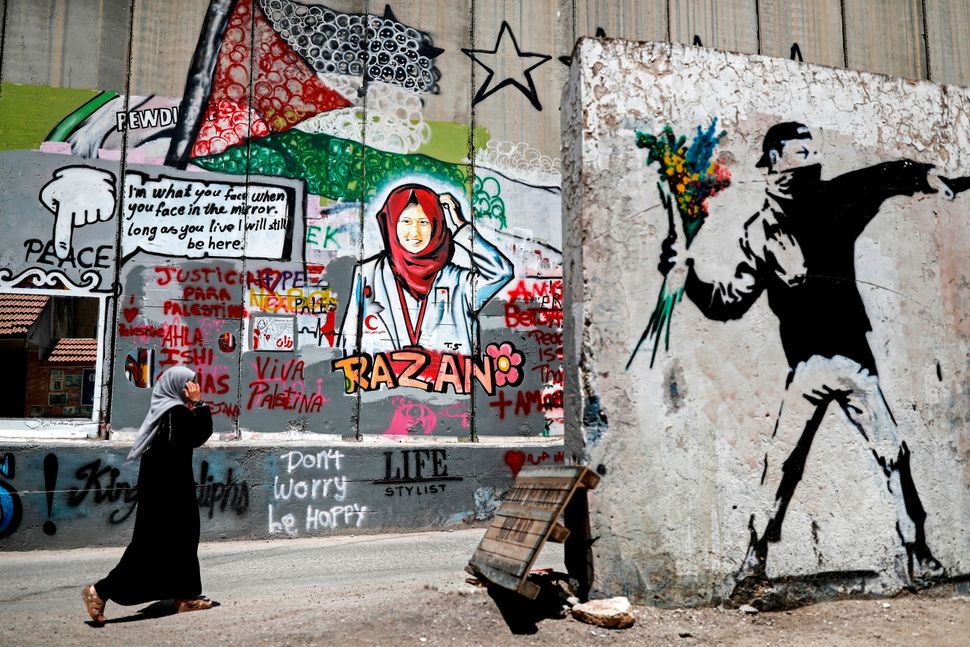 To Yossi Klein Halevi, on the publication of your book “Letters to My Palestinian Neighbor”:

It’s great that you are calling me neighbor, because in fact we are neighbors even though it took me time to realize it.

It’s true there is wall between us, and it’s more that just a concrete wall; it’s an emotional and traumatic wall, too. It’s a wall that’s built on sad experiences and much suffering.

Allow me to tell you that I grew up not seeing you as my neighbor. Instead, I grew up in Gaza seeing you as a criminal, as somebody who came to steal our land and kill us. That is what I learned from our history. That’s what I have being taught.

And why not believe it?

I was born in 1994 and so was only 7 years old when the first Intifada started. I remember being in the UNRWA [United Nations Relief and Works Agency for Palestine] school where every day I was reminded that, 70 years ago, you kicked my family out of the land.

From the moment the airstrikes started on Gaza, I heard the sounds of bombs, and the screams of my schoolmates. From our school we could see smoke everywhere.

When I returned home from school, I asked my parents to tell me who did this? They told me, “The Jews, the Israelis did it.” So why not hate you? Why not see you as an enemy?

Living in Gaza, I had had no human interaction with Israelis. The only Israeli voice I recognized was that of Israeli jets flying overhead.

This is what motivated me to view you as an enemy instead of a neighbor.

Now you tell me about the repeated rejections of the Palestinians to the peace plans offered by the Israelis — whether by Ehud Barak or Ehud Olmert.

I would like to tell you how Palestinians understand this in light of our history: We have learned that before 1948 and the establishment of Israel, our “Catastrophe” or Nakba, the whole land of Palestine was ours and everybody on the land spoke Arabic. Then all of a sudden, Palestinians were called upon to approve giving a large portion of land to foreigners. Can you tell me why we should have approved such a thing?

It’s clear that you and I see the situation completely differently in terms of how we examine this conflict. But at least we do agree that there is a wall between us. And, as I expressed before, we know that this wall is more than material, but an ideological obstacle as well.

This wall doesn’t permit those on each side to see the humanity of the other. Instead, it makes both sides feel like the other side is his enemy, whom he should fear.

As a Palestinian, I see the settlements as a obstacle to peace. When I first came from Gaza to the West Bank, it was my first time interacting with Jews in the settlements in this common Area C. These areas do allow us to have access to one another. They allow us to stop being afraid of one another and to start seeing the humanity in each other. Being able to meet the settlers changed my heart in terms of the way I see the Israelis and I wish that every Palestinian and Israeli could have some positive engagement with the other side. I think we will both agree that the wall must fall, while ensuring your security and my freedom.

In my history classes, when I was at school, I never heard about the Jews having been here or about them having any connection to the land. What I have always heard is the word “alhaykal almaz’aom” which means the claimed temple, referring to the temple that the Jews claim to have had in Jerusalem. It wasn’t until I became serious about reading the Bible that I recognized that the Jews were here, and they had had the temple. I actually was angry that our education system would lie to us.

Why do we as Palestinians have to remove a part of the history in order to disprove the connection of the Jews to this land?

It was challenging for me to accept the connection of the Jews to the land and I totally understand the emotional sensitivity of my people who refuse it.

But here is my question: Does the Jewish connection to the land mean justifying complete Jewish sovereignty over the land and outright rejecting Palestinian nationalism? I don’t think it should. I think it is wrong to attempt to erase the historical connection of both Jews and Arabs to this land.

Whether it was the result of war or other systemic actions, once the Nakba happened, 650,000 thousand refugees were not allowed to come back to their homes because you came back to yours.

Can we handle this paradoxical narrative? Can I acknowledge your need and connection to the land, and can you acknowledge the suffering caused to our people because of your return?

For me, I reject both of these claims because it is not for me to decide what Judaism is. Instead, you and your history are what will decide.

It seems to me that a large number of Jews have chosen Zionism as their particular form of nationalism, and I am okay with that.

Also, who I am to tell you that you are not Jews? But let us understand what is at the root of the claims of the Palestinians. To say Judaism is only a religion is to imply that Jews do not need a state. And to say that these Jews are not real Jews is to mean that they have no legitimate connection to the land. Why would Palestinians emphasize these claims? It’s that feeling that if we do not, then we will legitimize the very Zionism that has destroyed both our national dream and our right to self-determination. How can we envision an end to the occupation and our capacity of self-determination while admitting these things?

We face many risks to our greatest hopes simply by recognizing Jews as a nation who relate to this land. And that, Neighbor, is why your voice is important, because it tells us that being a Zionist doesn’t have to mean being against Palestinian rights.

Khalil Sayegh is a Philos Project fellow and a Gaza-born Palestinian Christian.

Yossi Klein Halevi Asks Me To Recognize His Humanity. Can He Do The Same For Me?