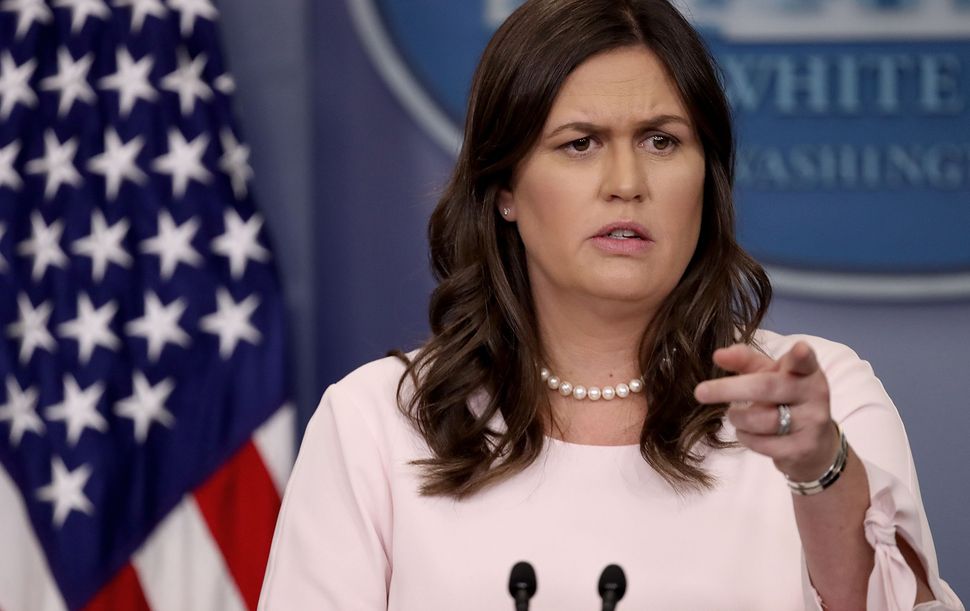 Ever since Sarah Huckabee Sanders, President Trump’s press secretary, was booted out of a restaurant for lying to the American people about the president’s policy of tearing babies from their mothers’ arms, calls for civility have populated the op ed pages of the country’s biggest papers.

Even the editorial board at the Washington Post published a piece that deemed the move unwise and immoral, saying that the feckless instruments of Trump’s government — Sanders, Stephen Miller and Kirstjen Nielson — should “be allowed to eat dinner in peace.

I would like to know why a liberal paper like the Washington Post believes the apparatchiks of Trump’s despotism should be allowed to eat their steak frites in peace?

I won’t let this administration or editorials bullshit me into believing that civility can be equated with morality. Civility often depends on compliance, and compliance is the lifeblood of despotic leaders. Without it, people like Trump and Huckabee Sanders would be reduced to insignificance. They would be impeached, disgraced, shunned. At best, their ilk would simply remain bombastic B-list reality TV stars.

Criminals like Greg Gianforte, the incoming Republican congressman from Montana who was convicted of assaulting a reporter, somehow have the unmitigated gall to demand respectful dialogue. This is a tactic of tyrants, and those who wish to be tyrants; they are depending on us to bend to the pressure of their hypocritical moral judgements, allowing them to instill chaotic and discriminatory policies.

It may seem an unpleasant truth, but no one has the unfettered right to eat in a restaurant. And that’s a good thing.

The Civil Rights Act of 1964 prohibits restaurants from refusing service based upon race, color, religion or national origin. However, if any person’s presence detracts from the safety, welfare or well-being of other patrons at the restaurant, then they can be shown the door.

Sanders wasn’t kicked out for being a (presumably) heterosexual, white, Christian, Republican woman. She was kicked out because she has chosen to perform a strange public dance in which she alternates between spewing out and defending the lies of a man with aspirations to dictatorship. She was kicked out because the employees felt unsafe in the presence of someone who holds little regard for our wider community standards of kindness and respect, because they felt unsafe serving someone who accepts their oppression.

It’s comically offensive when Former Secretary of Education Arne Duncan and Council on Foreign Relations President Richard Haas compare what happened to Sanders to the ways in which black people and other marginalized groups have been refused service.

My personal opinion:
No matter how much we dislike or disagree with someone, we should not deny them the chance to have a meal.
The history in our country of denying people access to restaurants, to water fountains and even bathrooms is too raw, too real.
We can’t keep dividing.

.@RichardHaass says restaurant booting Sarah Huckabee Sanders over the weekend “violates the spirit of the Civil Rights Act of 1964” pic.twitter.com/G5g51Spio5

That’s ridiculous. Asking her to leave is not a violation of civil rights, but a manifestation of it. Separating children from their families, colluding with foreign authoritarian governments and hiring Nazis are not “political views.”

Pretending that the members of Trump’s team are merely despised for their political views benefits no one. If they have political views, they are only ones of chaos and hatred, which shouldn’t be tolerated anywhere. Normalizing their presence and participation in our society is the beginning of the normalization of a dictatorship.

Furthermore, I don’t give a crap if Sarah Huckabee Sanders can’t eat in peace. I bristle at the suggestion that I should. If she and Trump would like a nice meal, let Russia pay for it and deliver it to the Oval Office. This administration’s actions shouldn’t earn them the right to peace — it should guarantee a lack of it.

It’s telling that indignant white Republicans are choosing this incident as a marker of the breakdown of our nation’s moral fabric. As if not being able to be served by the very people you want to oppress is akin to being gunned down by police, being raped, by ICE officers or being among the nation’s half a million homeless people.

This country’s moral fabric burned to ash a long time ago.

The Washington Post editorial board claimed that incivility leads to “a world in which only the most zealous sign up for public service,” which wouldn’t benefit anyone. Again, I disagree.

Resistance is not what creates zealots; tyranny is.

At the same time, we are in this mess because our Democratic leaders aren’t zealous enough; they’re flimsy and malleable. They follow corporate money, they cling to centrism, they compromise the lives of the vulnerable and call it progress. Their resistance to Donald Trump is largely weak, ineffective and reactionary.

Civility, in addition to being unnecessary, can be harmful. Some may even argue that it is the beam that props up dictators.

President Barack Obama was civil when he was blocked from appointing Merrick Garland to the Supreme Court for 293 days. For 293 fucking days, the longest nomination process in history, Obama played by the rules of a game rigged against him because of his skin color. Then, an orange-tinted veritable buffoon was able to get Neil Gorsuch nominated within three months of his presidency.

This led directly to the SCOTUS decision which upholds the Muslim travel ban, effectively killing the people who need refuge from wars that this country started. Devastatingly, Supreme Court Justice Anthony Kennedy just announced his retirement; as he was often the swing vote, Trump can now turn the highest court into a right-wing extension of his infantile hatred of decency.

So you see, civility is no guarantee. Civility can be fatal.

That’s why those who can afford civility and decorum without reservation have power. Who are Rep. Nancy Pelosi and Senators Chuck Schumer and Bernie Sanders to define the “right” way to resist? People do what is in their power. It was in the power of Democratic Socialist Alexandria Ocasio-Cortez to win the primary against a 10-year Democratic incumbent. The owner of Red Hen was empowered to show Sarah Huckabee Sanders the door.

As powerful politicians, Schumer, Pelosi and Sanders have the ability to be civil and still survive. Immigrants, black people, trans and queer folks largely lack this privilege.

Demanding that marginalized people be civil to the wannabe agents of tyranny is irresponsible and reckless.

The expectation that people should abide by a prescribed formula of resistance has led to unfair punishments. Consider Corey Alexander Long, who was found guilty of disorderly conduct for defending himself against armed neo-Nazis at last August’s Unite the Right rally in Charlottesville, Va. Condescending demands for civility aren’t relegated to the editorial board at the Washington Post — they’re in our courts, punishing marginalized people for resisting.

In this case, with this administration, civility is not civil. Civility is compliance. Civility is apathy. Compliance and apathy are choices that put vulnerable groups — and, by extension, the whole country — in danger.

While we engage in this debate, as you read this article, even, Trump busies himself with the shockingly easy task of getting us to accept his dystopia as our new reality. The lack of outrage about the continued contamination of Flint, Michigan’s water source, the thousands of Puerto Ricans dead from Hurricane Maria and the murder of Antwon Rose show that his plan is working. Trump and his administration don’t care, and neither do many of us.

We don’t have time to tone-police roast chicken, nor will that help this country. Sometimes, the most patriotic thing we can do is say “fuck civility,” assert our rights and speak our truth.