De Niro, Sanders, and the Need for Derech Eretz 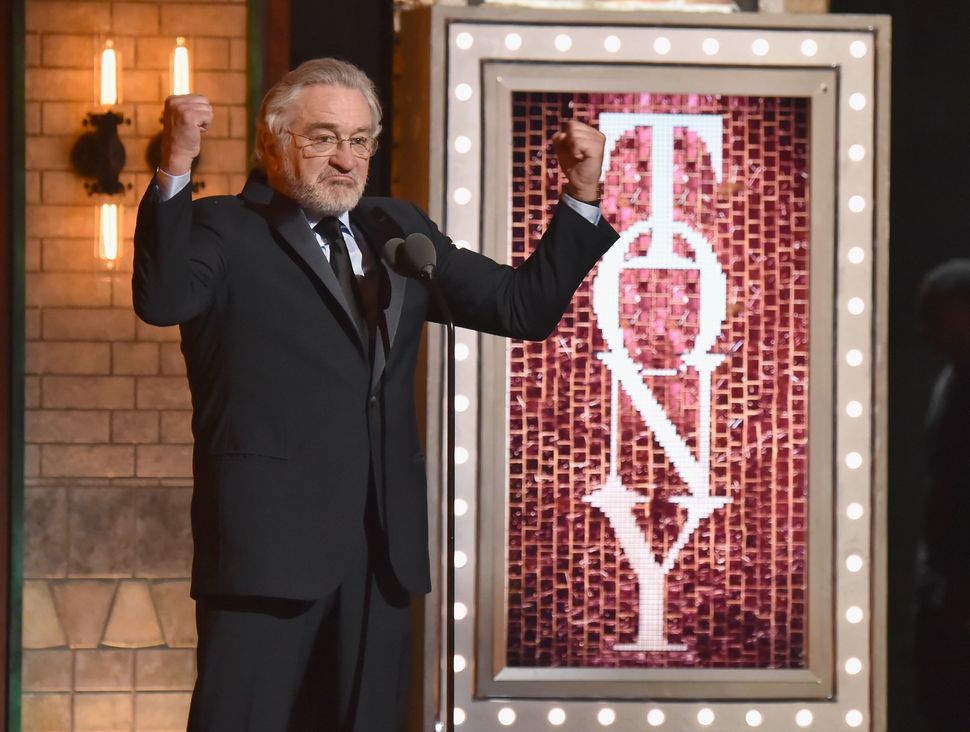 Two years ago, during the height of ferocious anti-Semitic trolling of Jewish journalists, including many at the Forward, I issued a Trumpatorium. For 24 hours, from 5 am June 21, 2016 to 5 am the next day, the Forward did not report on, write about or post anything mentioning Donald Trump’s name or his presidential campaign, which was then on the verge of securing the Republican nomination.

Many of the threats to journalists drew on connections to the Trump campaign, using his image and targeting his critics. Even if he didn’t directly stoke this cyber-hate, he did nothing to minimize or condemn it.

I had hoped that this break in coverage would be copied by other media outlets, but alas, it seemed a solitary statement. And now that he is president of the United States, of course, we must follow what he says and does; his words and behaviors have global consequences.

Still, I’m proud that we hit the pause button, even for a day, even alone. Our Trumpatorium was a declaration against the rising tide of intolerance in American public discourse, and an acknowledgement of the media’s complicity in this dangerous development.

We need it again, now.

If name-calling, mockery, cursing and public shaming are wrong when Trump’s people do it, then they should be wrong when anyone else does it, too. We Jews have an apt phrase to describe how in fact we should behave: derech eretz, commonly translated as “the way of the world,” the code of proper behavior which binds us as human beings and as Jews. Common decency. Good manners. Appropriate behavior. Respect.

And yet following this precept in this current political environment is not as simple as issuing a one-day moratorium.

So, I thought it unacceptable when Robert DeNiro spewed forth a four-letter word on the nationally televised Tony Awards program, and worse that he was roundly applauded.

I was seriously uncomfortable when Sarah Huckabee Sanders was asked to leave a restaurant by an owner who somehow felt that her values were being sullied by the press secretary’s presence.

Nor do I find it acceptable that diners in other restaurants loudly hounded other members of the Trump administration, or shouted at a Trump supporter at a movie theatre.

What, exactly, is accomplished by this rude intolerance? Did the protesters really expect that Homeland Security Secretary Kirstjen Nielsen would suddenly stop enforcing the inhumane immigration policy just because she is yelled out when she goes out to eat?

What is accomplished is further discord and division, which is exactly what the White House wishes to sow across America. It seems to me that we must be able to distinguish between objecting to policy and those responsible for it in appropriate times and in the appropriate tone, and the right to privacy and respect that even public officials are allowed in their personal lives.

Last week, I argued that the Jewish community should disown Stephen Miller, the senior White House adviser, for his role in devising and promoting the separation of children from their families as they seek asylum at the border, and for the administration’s attempt to ban visitors from Muslim countries. Many readers agreed with me. A few did not.

“Your rhetoric is exactly what is wrong with this country,” one critic wrote to me. “It is the same rhetoric which is leading to restaurants not serving people they disagree with. Or people being harassed because their views are different.”

Fair point. But here’s my response: Criticizing a significant government official with authority over the lives of countless individuals is precisely what we do as journalists. I don’t interpret derech eretz as intending to silence legitimate protest or attempts at accountability. I wrote that piece to make it clear to the wider public that Miller does not, in my opinion, represent core Jewish values. Having that debate on a journalistic platform is appropriate. Denying him the right to order a cup of coffee in a restaurant is not.

If De Niro wanted to curse out Trump, let it be at a political rally (though I wish he’d clean up his language.) But to do so at a publicly televised entertainment show seemed inappropriate and gratuitous.

Drawing the line is not easy, however, if we are to be intellectually honest and consistent. Are the football players who kneel during the national anthem violating derech eretz or expressing their views on a subject of national importance? What about ordinary citizens, who don’t have what I have: a platform to express my views. Should they be prevented from questioning an official on the street or in a store? When does the zone of privacy start and finish?

Trump has obliterated the rules and expectations of civil discourse in the way he conducts himself. The challenge will be to rewrite those rules and adjust those expectations with decency and respect. It may takes years, even decades, for our society to recover, but there is a path for us to follow, and derech eretz leads the way.

Rocking the Rockowers. Okay, time for a pat on the back. At the American Jewish Press Association meeting last week in Cleveland, the Forward picked up 12 Simon Rockower Awards, recognizing the best in Jewish journalism throughout North America.

What was so gratifying was the fact that these awards — eight first places, four second places — touched upon everything we do. Long form news stories. Impactful investigations. Probing culture reporting. Kick-ass editorials (mine included!) Personal commentary. An entry from the Yiddish Forward won in two different categories. And our innovative Jewish Guide to College was cited as the best special section of the year.

It’s a privilege to work with such great professionals, and to see our journalism applauded by our peers. Thanks to the judges, and our worthy competitors. And thanks to the readers, who keep us striving.

What else I’m watching. There’s nothing Jewish about it, but still — I cannot help recommending that you watch James Corden’s latest edition of Carpool Karaoke, with Paul McCartney. It is nothing short of brilliant.

I’ve swooned over McCartney since I was a very young girl, listening endlessly to the first Beatles album, staring into those dreamy eyes on the cover. He is way older now, of course, but he still manages to maintain that unique charm and charisma. And, in this video, he acts like a pure mensch.

Yeah, it is a Jewish thing.

Looking forward. I’ll be a guest speaker next week at the Everett Jewish Life Center in Chautauqua. If you are in the area in upstate New York, please do come by.

And, as always, feel free to email me at JaneEisnerEIC@forward.com.

De Niro, Sanders, and the Need for Derech Eretz