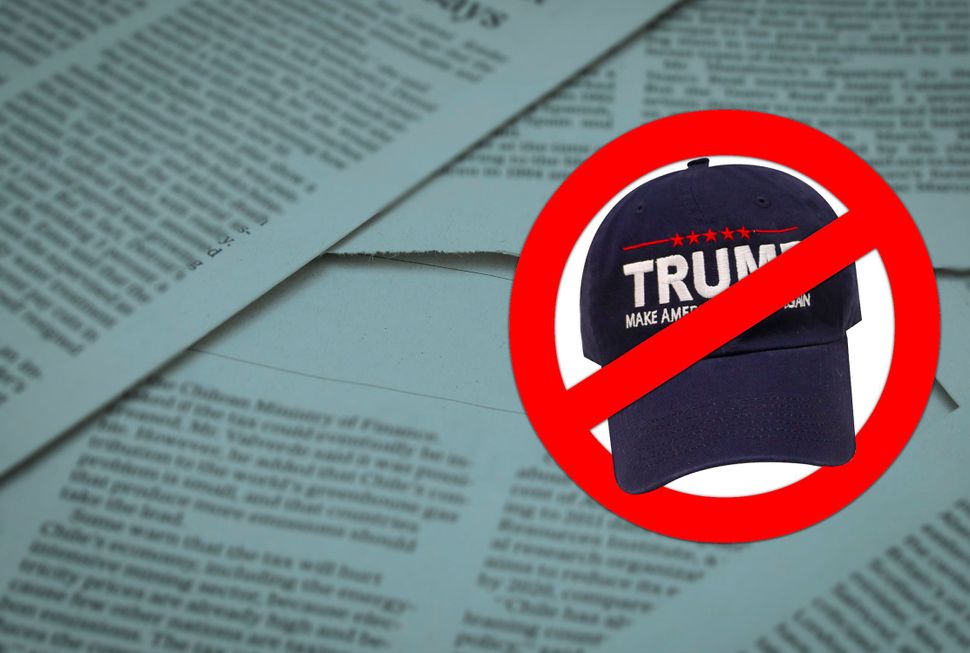 The attack on journalists, and journalism, that we are witnessing today is of a more significant and far more dangerous order of magnitude than anything I’ve seen over decades in this business. And whereas usually it’s best for a journalist to just grow a thick skin, a supple spine and the ability to ignore the crazies, what we’re witnessing in the age of Donald Trump calls for a bolder response.

Online bullying is a non-partisan activity — both the far left and the far right are quite good at it — but the virulent anti-Semitism many journalists experience today comes from what is known as the “alt-right,” shadowy white supremacists who mainly hide behind the anonymity of Twitter to traffic in horrible Holocaust imagery and directly threaten Jews.

Many of these threats draw on connections with Trump’s presidential campaign, using Trump’s image and targeting his critics, including several of our regular writers. Even if you don’t believe that the presumed Republican standard bearer has stoked this cyber-hate (which is a generous assumption), you have to admit that he appears to have done nothing to minimize or condemn it.

How can the Forward, a relatively small news organization with a passionate national following and a journalistic pedigree more than a century old, respond? We haven’t been banned from covering Trump, as The Washington Post and other outlets have, but nor have we been offered much access. When given the opportunity, we ask the candidate tough questions, as we do any candidate, but that opportunity has been given only once so far.

So we have decided to declare a moratorium on Trump coverage for a day. A Trumpatorium, if you will.

For 24 hours beginning 5 am Tuesday, June 21, and ending 5 am Wednesday, June 22, we will refrain from publishing anything that mentions Trump’s name or his campaign.

Why take such a symbolic step? (And yes, we are conscious that this is symbolic.) My immediate concern is to address the rising threat level against journalists who are Jewish or who are perceived to be — the haters sometimes don’t bother to distinguish — and who are being bullied, harassed and endangered by the surge of anti-Semitism on social media, predominantly on Twitter. The situation is so dire that the Anti-Defamation League has created, for the first time, a task force to evaluate the problem, develop recommendations and spark public conversation about this dismaying trend.

Two members of the task force, Bethany Mandel and Jay Michaelson, are regular Forward columnists, and have been the subjects of terrible personal attacks for their totally legitimate criticisms of Trump’s policies and pronouncements.

Bethany and other conservatives who criticize Trump have become special targets. As Evan Siegfried wrote recently in The Washington Post, for daring to say they won’t endorse Trump, conservatives have been rewarded with “(h)arassment, anti-Semitism and threats of physical violence, including death. The perpetrators? Trump supporters and the alt-right, a white supremacist movement that is ecstatic to see Trump running for president.”

Jonathan Greenblatt, the ADL’s national director and CEO, has been in the job only a year, but he told me that no one in his century-old organization can recall a time when journalists were under siege in America as they are now. “What we’ve seen now is unprecedented,” he said.

Our Trumpatorium is a show of solidarity with Bethany and Jay and the many other Jewish journalists — Julia Ioffe comes to mind as another prominent example — chased by the Twitter trolls and cyber-haters. It’s a way of calling attention to the abuses on Twitter itself, which clearly isn’t upholding the standards it requires of its users. As The New York Times editor Jonathan Weisman pointed out after his run-in with neo-Nazis, anti-Semites and the like, “Twitter appears determined to ignore its own terms of service.” Terms that explicitly prohibit hate conduct and harassment.

For that reason, all of us who care about civil discourse need to pressure Twitter to hire more people to block accounts and respond to complaints, and to streamline an onerous complaint process. Anti-Semites must be held accountable for threatening speech and harassment.

But our Trumpatorium is also an acknowledgement of the role the media has, even unwittingly, played in elevating the worst in the Trump campaign. By first treating the campaign as a reality show instead of a serious challenge to the democratic order, we enabled the candidate to skirt substantive questions about his proposals and gloss over inconsistencies and lies. We amplified the name-calling and insults, focusing on polls and the political horse race instead of fitness and character. We gave him what seemed like unlimited air time, ignoring the old rules of fairness and balance. We let him do what he does best: define the world in his terms, civic consequences be damned.

As Mark Feldstein of the University of Maryland noted, Trump “is in many respects a media creation, built up by nearly $2 billion in free publicity that helped him shock the political establishment by vanquishing 16 GOP opponents in less than a year.”

For a time, this creation seemed like a ratings bonanza, a sure way to capture those clicks; only later did this magnetic attraction turn into a threat to our basic institutions, among them the First Amendment.

Our Trumpatorium is a modest attempt to restore balance and maintain journalistic perspective, to lower the temperature a notch, to pause and reflect, to adjust our own behaviors. If you are part of the vast majority of Twitter users who aren’t among the trolls and the haters, join us. Let’s change the discourse for a day. And just maybe, more will follow.