Donald Trump Doesn’t Know What To Call the West Bank 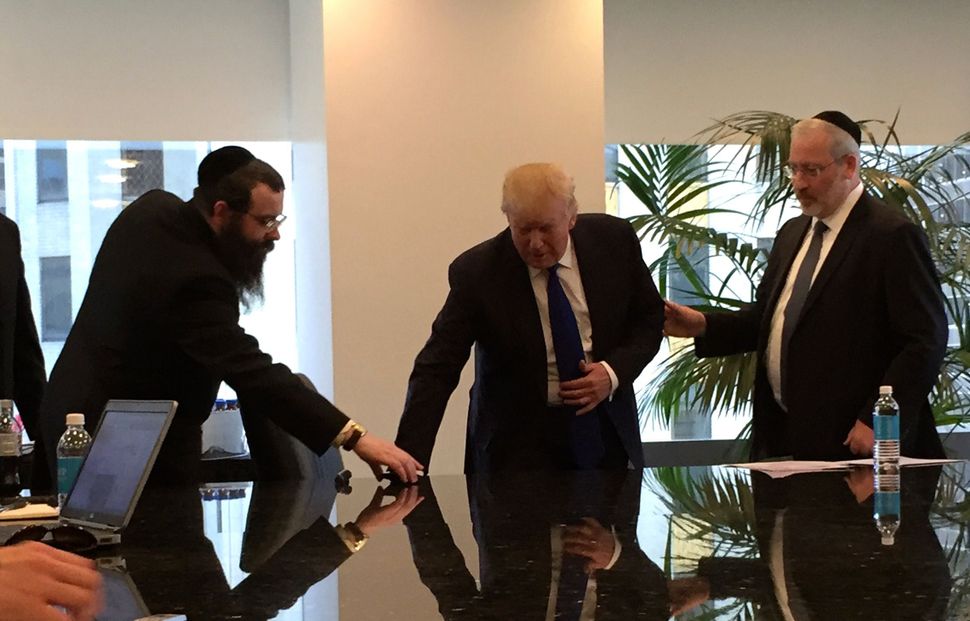 Partway through a Trump Tower interview with two dozen reporters and ultra-Orthodox activists Thursday afternoon, the leading Republican candidate for president deferred to a real estate attorney for help answering a question about Israel.

“Jason, how would you respond to that?” Trump asked, gesturing to the chief legal officer of the Trump Organization, Jason Greenblatt. 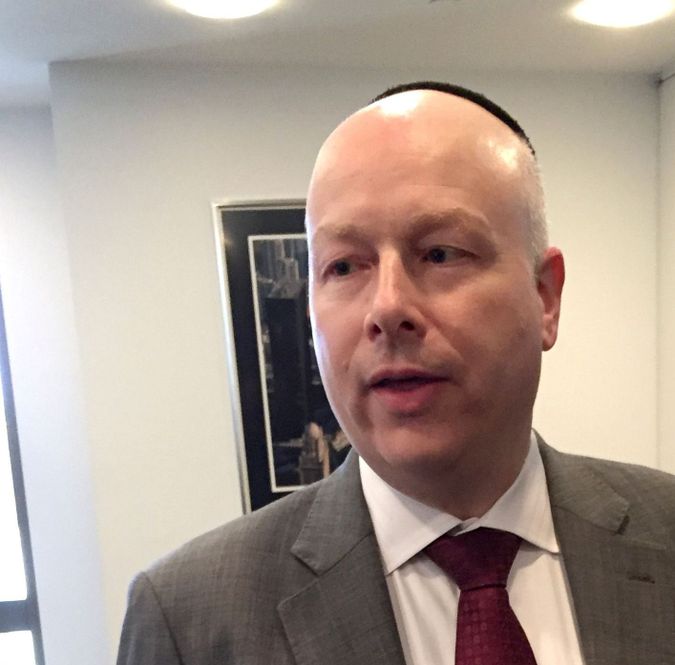 A Forward reporter had asked Trump what phrase he would use to describe the land east of Israel’s Green Line, which demarcates the country’s pre-1967 borders and is variously referred to as the West Bank, occupied territories, Judea and Samaria and Palestine.

It was a question meant to elicit a specific response on a politically freighted issue. Essentially, Trump didn’t answer.

The GOP candidate responded that there are “many words that I’ve seen to describe it,” before deferring to Greenblatt.

Greenblatt said that he wouldn’t call the land the “occupied territories,” and that too much time was spent “getting hung up on terminology.”

The group interview, organized by Rockland County Hasidic activists who said they were unaffiliated with the Trump campaign, took place in the Trump Organization offices at Trump Tower on April 14, in a conference room with a commanding view of 5th Avenue and Central Park. A three-foot-long model of Trump’s private jet was parked in the corner. The small crowd was heavily Hasidic, and included many Orthodox activists and advocates. Reporters from Hamodia, the Jewish Press, the Algemeiner, and the JTA, among other outlets, were also in attendance. 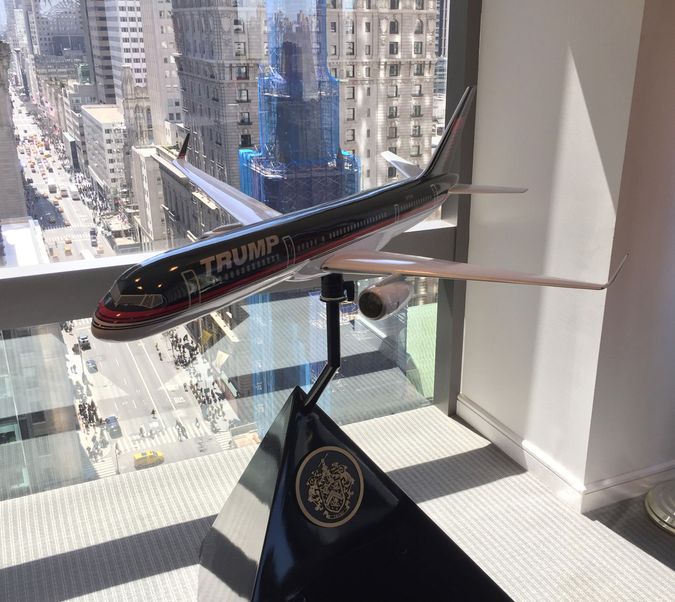 A scale model of Trump’s private jet sat in a corner of the Trump Organization conference room. Image by Josh Nathan-Kazis

Before the event began, an aide passed out photocopies of the text of Trump’s controversial speech to the annual conference of the American Israel Public Affairs Committee in March.

As he entered, Trump told the room that his daughter Ivanka Trump, who converted to Judaism, “sends her regards.”

Trump gave a brief introduction, highlighting his AIPAC speech. “It was very well received,” Trump said. “As you know, we got the biggest standing ovations by far.”

AIPAC leaders apologized for partisan attacks in Trump’s speech the morning after he addressed the group.

Moments into his meeting with reporters, Trump turned to his campaign manager, Corey Lewandowski, and asked him to fetch Greenblatt and another Jewish employee of the Trump Organization, David Cohen.

“Very talented people,” he said of Greenblatt and Cohen.

Greenblatt, who wore a black knitted yarmulke, told reporters after the session that he has worked for Trump for nineteen years. He said he had studied as a young man at Yeshivat Har Etzion, which is located in a West Bank settlement, and that the settlements “need to stay there.”

“I very much believe in them,” he said.

Greenblatt also said that he believed in a two-state solution.

Trump dodged a complex question on religious liberty, tied to the Supreme Court case brought by the Little Sisters of the Poor, a Catholic order, over health insurance coverage of contraception. “You know, that’s been a question that’s been asked and discussed very brilliantly on many different levels,” he said.

The Republican candidate also took a moment to attack President Obama and Hillary Clinton, who leads in the Democratic nomination battle.

“I have many Jewish friends,” Trump said. “The thing I don’t understand is, in my opinion, Barack Obama has been tremendously disloyal to Israel. Tremendously. And yet my Jewish friends go out and have fundraisers for him.” Of Clinton, Trump said: “She’s not a trustworthy person.”

Trump also praised Lewandowski, his embattled campaign manager, who was arrested on battery charges following an incident at a Trump campaign event. Florida authorities announced that the charges would be dropped around the same time that the group interview took place.

Trump repeated his claim that Lewandowski had not touched Breitbart reporter Michelle Fields. “I thought it was disgraceful,” Trump said, before asking Lewandowski if there were any updates on the case.

“They just dropped all the charges,” Lewandowski said.

“Oh, good,” Trump said. “Now tell my friends from, in some cases, Israel, how loyal was Mr. Trump to you?”

“More than I could possibly fathom,” Lewandowski said. “I am so grateful.”

“I’m proud of you, Corey,” Trump said, before turning back to the crowd to crack: “He wasn’t quite as effective for the past couple of months.”

Donald Trump Doesn’t Know What To Call the West Bank