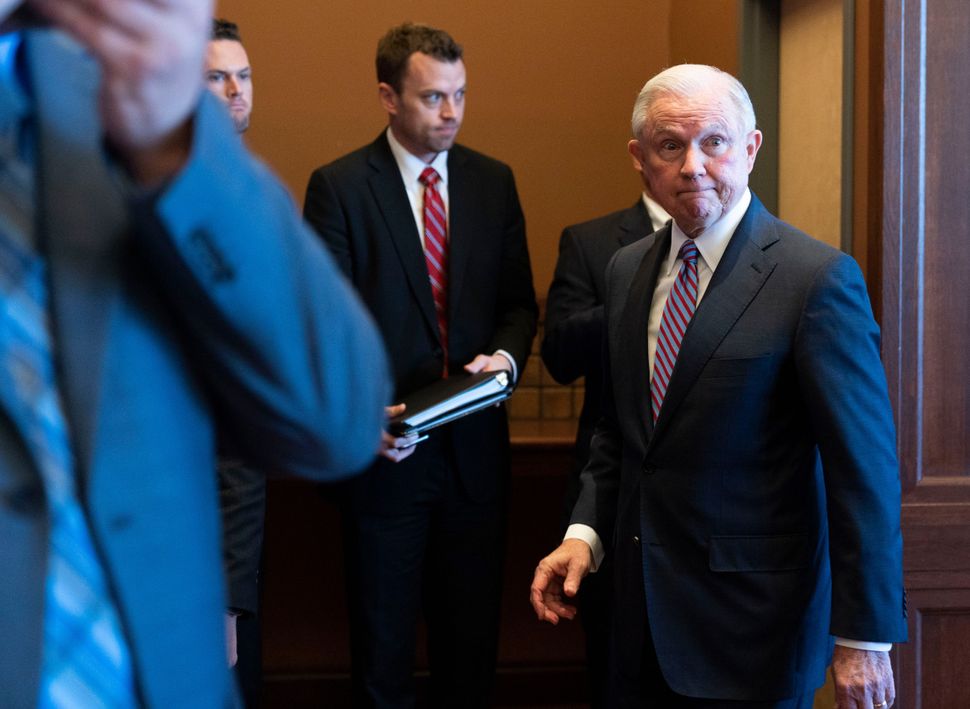 Attorney General Jefferson Sessions, recent recipient of a justice award from the Orthodox Union, had some bone-chilling commentary on the Bible this week, claiming it justified separating children and parents at the border—and using the same part of the New Testament, Romans 13, that had once been used to justify slavery.

But let’s parse what Sarah Huckabee Sanders, daughter of pastor Mike Huckabee, had to say in response to questions about Sessions’ Biblical claims: “I can say that it is very biblical to enforce the law.”

Consider Jacob’s descendants making their way to Egypt. Then as now, it is a story about refugees moving because of hunger—in other words, economic need. And then as now, there was an assault against the younger generation of these desperate migrants.

Pharaoh decreed that all Jewish boys should be thrown into the Nile (Exodus 1:22), but the Jewish midwives weren’t having it. As a refresher, that’s how Moses ended up in the reeds, being watched by his sister Miriam. And that kicks off the very dramatic moment of Pharaoh’s daughter noticing baby Moses.

This time, Jews were not the desperate ones in the water, clinging to life in a flimsy ark, a baby bundled in raft. But you would think Jewish leadership would remember that scene, taught to every Jewish child.

It is important to ask why the leadership of the Orthodox Union is fine with an interpretation of the Torah that ignores one of its key story lines: doing anything to stay alive, no matter what the powers that be have to say about it.

For Jews, the idea of authorities separating families has chilling historical resonances, going all the way back to Pharaoh.

Anyone familiar with 20th century Jewish history has read about the selection lines at Auschwitz. But if we’re talking “very biblical,” the issue of taking children away happens to have biblical resonance: it is the story of Moses, the beginning of the great exodus that is one of the founding narratives of the Jewish people.

The entire exodus story is the idea that the cruelty of officialdom, culminating in slavery and murder, can be overcome by God. That, too, is “very biblical.”

True, in some ways, Sarah Huckabee Sanders’s phrase “very biblical” is meaningless, because it covers everything from animal sacrifice to marriage. In some ways, it echoes other phrases without clear meanings used by this administration, notably “make America great again” –leaving the listener to fill in the blanks.

But even allowing for that, it’s hard to miss that what is “very biblical” is the repeating idea in the Torah that justice and the law are not always the same, and that commonly accepted practice of the neighbors—like, say, child sacrifice—should not be endorsed and imitated. Then there is the particular world view of Orthodox Judaism to consider. And because this is the Orthodox Union, it is relevant.

What is very Orthodox is the concept that human authority is not the highest authority; that there is a God and there is divine law. It’s hard to fathom how the Orthodox Union can see what is happening at the border as something consistent with divine law, as something that can be labeled “just”.

Similarly, it is impossible to understand how anyone who has read the Hebrew Bible—as it is reasonable to assume the OU leadership has—missed the story of Moses.

To borrow a phrase from Huckabee Sanders, Moses is, well, “very biblical”.