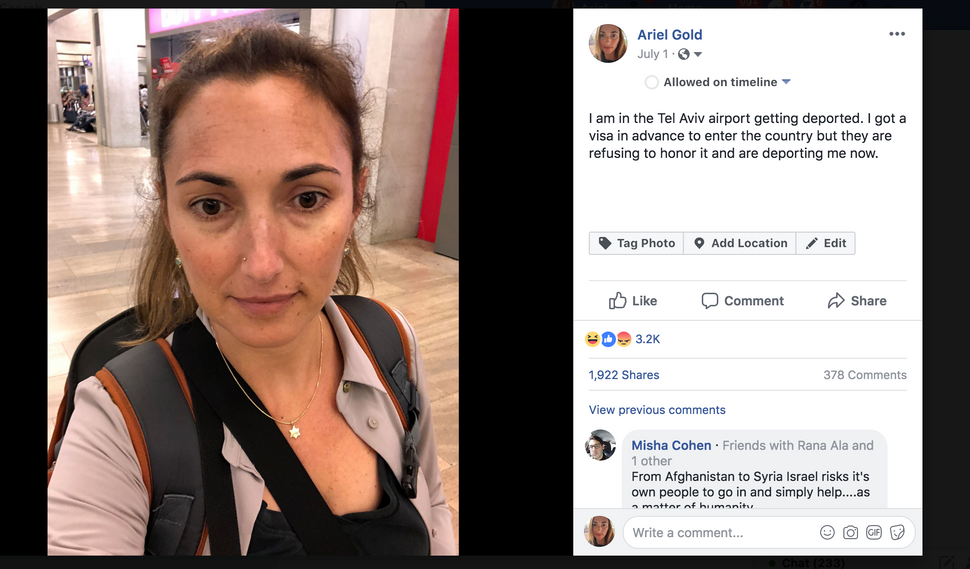 “What Palestinians do you know? Let me see the contacts in your phone. Who gave you a visa to be here?” the police woman demanded.

“Your government gave it to me,” I replied. “The Israel consulate in New York City.”

This was round three of questioning in the Ben Gurion airport as I was attempting to enter Israel. About two hours later, I was informed that my visa was being revoked and I was being placed on a flight back to New York City.

Two Ministers — Gilad Erdan, the Minister of Internal Security, and Aryeh Deri, the Minister of the Interior — were involved in the decision not to let me, an American Jewish woman, enter the country. Erdan charged me with being a BDS activist. “Gold distributed videos on social networks, in which she harasses IDF soldiers and Border Police officers in Hebron, accusing the soldiers of apartheid and oppression, and that their actions do not conform to Jewish values,” he said. And Deri said that he was again using his “authority to prevent the entry into Israel of a woman who came to act against Israel and call for its boycott.”

Erdan is correct. I have shared videos of Israeli soldiers and Border Police officers, and I have admonished them for complicity in occupation and oppression. Last summer, while I was staying in Hebron, I was physically assaulted by a notoriously violent Israeli settler.

While I was on my way to take the bus from Hebron to Jerusalem, she and an adolescent boy kicked and hit me and tried to slap my phone out of my hand. She told me to “Go to Auschwitz” and to Syria. I responded not with any type of violence but by appealing to the soldiers next to us to intervene and protect me.

Rather than protecting me, the soldiers, upon realizing that I was Jewish, asked why I would support Palestinians. I told them that as a Jew I felt compelled to work for freedom and dignity for all. I told them that occupation is not a Jewish value. I broadcast the entire interaction live through my Facebook page. Afterwards, using the video as evidence, an Israeli judge granted me an order of protection from the woman.

If Erdan considers my appeal to soldiers for protection as a form of harassment, then he is correct that I have a very different idea of Jewish values than he does.

As I was leaving Israel last summer, I was informed in the airport that for any future entry into the country I would need to get approval from the Israeli administration in advance. For my trip there this summer, I applied to take a course, called Collective Memory and Cultural Myths in Contemporary Israel, at Hebrew University. Upon acceptance into the program, I applied for a visa at the Israeli consulate in New York City. They gave me a one-year student visa, good for multiple entries.

My family was a bit surprised that I was planning to go back given the attacks on me last summer. But I told them that if I want to be part of the reckoning we as Jews must someday undertake for what we have done to the Palestinians, a deep understanding of Israeli society is part of that equation. Unfortunately, my desire to learn more and my student visa were not respected by the Israeli authorities.

Upon learning that I had been denied entry, the Israeli political party Meretz posted on their Facebook page an ironic image contrasting me with Philippine dictator Rodrigo Duterte, pointing out the hypocrisy that the “Jewish State” denied me entry yet will welcome Duterte in Israel in September.

While fiercely critical of many of the actions of the Israeli government, I am also a member of a Union for Reform Judaism (URJ) synagogue. I am the mother of two Jewish children, whom I brought to bar and bat mitzvah and have sent to a URJ Jewish summer camp since the ages of seven. Last summer, at the age of 16, my son traveled to Israel with the American Jewish youth group North American Federation of Temple Youth (NFTY). My daughter hopes to do so next year. I am a believer in the importance of Jewish community life and Jewish history, including our history in the land of Israel/Palestine. 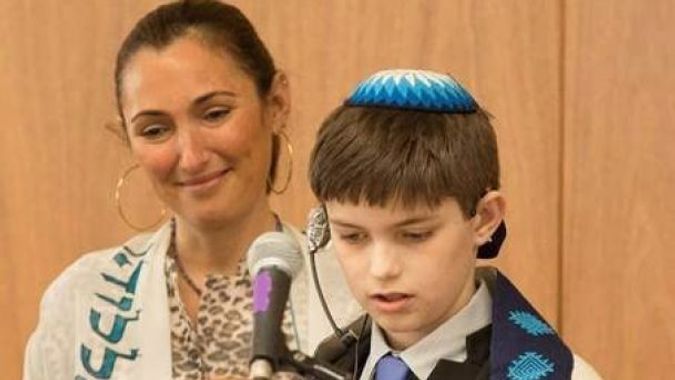 Duterte, on the other hand, won his presidency through promises to kill every drug dealer and user in the Philippines. He bragged about having carried out murder himself before running for president and compared himself to Hitler. “Hitler massacred three million Jews … there’s three million drug addicts. I’d be happy to slaughter them,” he said. He used his inauguration speech to specifically call for vigilante violence. “If you know of any addicts, go ahead and kill them yourself,” he encouraged. According to Amnesty International, between July 1, 2016 more than 7,000 Filipinos were killed by police and vigilantes.

The backwards Israeli government logic that I am a security threat, but those who openly advocate for and carry out violence are welcome, extends not only to Duterte, but also to controversial Hungarian prime minister Viktor Orbán, slated to speak in Israel this month. Under Orbán’s rule, Hungary has launched a fierce anti-immigration campaign which has included anti-Semitic billboards with pictures of George Soros. In one of his speeches, Orbán praised Hungarian Nazi leader Miklós Horthy as an “exceptional statesman.” Horthy oversaw the murder of over a half million Jews. Tamar Zandberg, head of the Meretz party, and Yesh Atid leader Yair Lapid have come out against Orbán’s scheduled visit.

The BDS ban, announced in January by Minister Erdan, has become a convenient way to exclude anyone, Jewish or not, who does not support the right-wing agenda of Netanyahu’s administration.

In fact, at no point during my interrogation in the Ben Gurion airport was I even asked about the boycott, divestment and sanctions movement. I was asked about the organization CODEPINK, of which I am the national co-director, and which endorses BDS, but this was only after they interrogated me about filming soldiers and knowing Palestinians. CODEPINK, like me, is a nonviolent group. We oppose US militarism and seek to change US foreign policy to support human needs rather than endless war.

Israel has now entered a phase where the only Jews who are welcome are those who either support occupation and the right-wing settler agenda, or are willing to be quiet. On June 30th, just as I was preparing to try to enter Israel, soldiers at the Gaza fence killed 11-year-old Yaser Abu al-Naja. He was the 16th child to be killed since the Great March of Return protests began in Gaza on March 30. Violence, like this, like the arrest and detainment of around 700 Palestinian children each year, is carried out by the Israeli government. It is tolerated and supported in Israeli society.

On the other hand, someone like me, who advocates freedom, equality and nonviolence, is banned.

For the sake of Israelis, diaspora Jews and Palestinians, we must demand change.