Will Brett Kavanaugh Push Supreme Court Further Out Of Step With America? 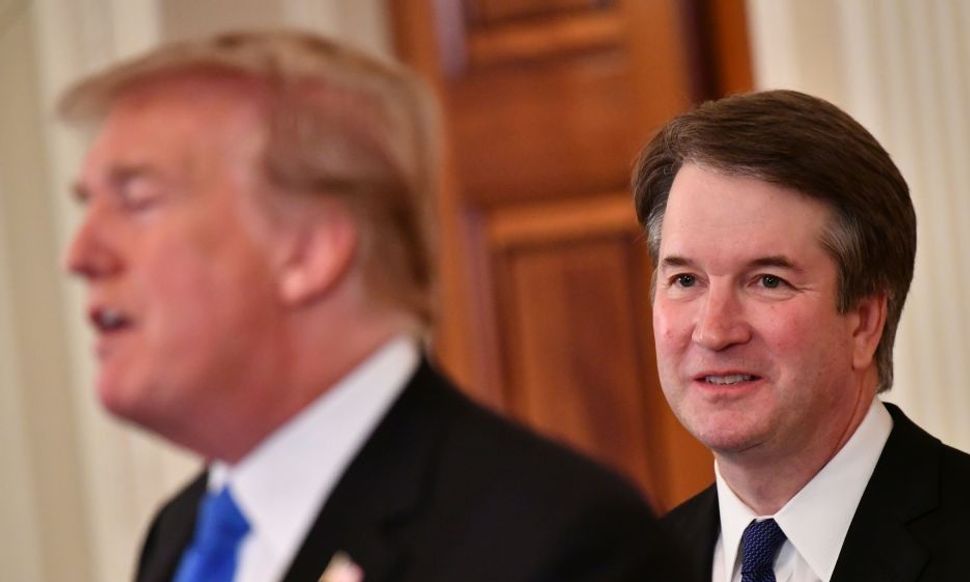 Brett Kavanaugh, President Trump’s second pick for the U.S. Supreme Court, is smart enough, smooth enough, politically savvy enough and well-connected enough to make him difficult to stop in a nomination process that has been ruthlessly rigged by Senate Republicans since they stole it away from President Obama in 2016.

Kavanaugh’s aw-shucks manner and photogenic family belies his worrying views on health care, abortion, the environment and government regulation. His Ivy League pedigree and reputation as a fine legal tactician may well allow wavering senators to overlook his years as a sharp political operative, involved in controversies from the impeachment of Bill Clinton to the Supreme Court’s fateful 2000 decision to hand the presidency to the popular vote loser, George W. Bush — mostly on the wrong side.

But what should worry us even more is this: He is very likely going to be another “minority justice,” reflective of today’s increasing political and social polarization, exacerbating the widening gap between the high court’s consequential legal decisions and a public on whose legitimacy the court ultimately depends.

This trend may have been inevitable, no matter whom Trump nominated — given that it was unlikely he’d do the statesmanlike thing and select a brilliant centrist. That’s what Obama did with Merrick Garland, and it made no difference at all.

Instead, Trump chose someone who may continue the high court’s path away from mainstream America.

As Kevin J. McMahon, a professor of political science at Trinity College, wrote a few days ago, “the Senate’s confirmation of Neil Gorsuch last year was unprecedented in the history of the country.” Never before had a “minority president” — a president who lost the popular vote, as Trump hates to be reminded of — named a “minority justice.” By that, McMahon means a justice who was confirmed by a majority of senators, but those senators did not represent a majority of voters.

In Gorsuch’s case, he was approved by 51 Republicans and three Democrats, who were together sent to office by 54 million voters. The 45 senators who opposed Gorsuch, all Democrats, collected more than 73 million votes in their last elections, nearly a 20 million-vote difference.

McMahon figures that there are only three members of the high court in the nation’s history who fit his description of a “minority justice” and they happen to be sitting today on the conservative wing of the Roberts court: Gorsuch, Samuel Alito and Clarence Thomas. Kavanaugh could be the fourth.

“That raises a question that goes to the heart of the Supreme Court’s legitimacy in our democracy: Will this be a court out of line with America?” McMahon asks. “If so, what might that mean for the country’s politics and law? Indeed, for the nation itself?”

No one can predict with 100% certainty how Kavanaugh will rule if he is confirmed, but there is solid proof of his leanings on some significant issues, and they are out of line with public sentiment. The biggest concern is over the future of Roe v. Wade, which Trump had vowed on the campaign trail to overturn. Kavanaugh made reference to “precedent” and “history” in his brief remarks, but as a devout Catholic and conservative thinker, there is plenty of reason to question him sharply about whether he considers the limited right to an abortion enshrined in Roe settled law.

But here’s the disconnect. In poll after poll, a substantial majority of Americans do not believe the 1973 law should be overturned.

Kavanaugh’s dissent from rulings upholding the Affordable Care Act also puts him at odds with the (slim) majority of Americans who favor keeping the law.

His strong support of the Second Amendment prompted the National Rifle Association to cheer his nomination. The American public definitely does not like the NRA.

Of course, Supreme Court justices are not there to simply put fingers to the wind and follow public sentiment blindly. One would hope that all nine justices have the intellectual consistency and the personal fortitude to interpret the law and the Constitution as they see fit, regardless of political pressures and prevailing attitudes. That’s why they have lifetime appointments. That’s why the politicization of the court is so dangerous.

But for much of recent American history, Supreme Court nominees needed 60 votes for confirmation, very often requiring bipartisan support. That threshold was first lowered to a simple majority when Democrats were in power — but only for cabinet secretaries and federal judges, not the high court. It was Senate Majority Leader Mitch McConnell who changed the rules for Supreme Court so that Gorsuch could be approved. While Kavanaugh may have a healthy chance of securing a simple majority, his path to the court would be immeasurably more difficult if the historical practice was still in force.

The justice Kavanaugh hopes to replace, Anthony M. Kennedy, was confirmed in 1988 by a 97-0 vote. While a unanimous decision was uncommon, it was not unusual for nominees of both parties to receive well over 90% approval by the Senate.

Not anymore. Not with this minority president. Not with his penchant to pick minority justices. Brett Kavanaugh may be smart, smooth, connected and qualified. But he may be bringing the treasured Supreme Court down a very dangerous path.

Will Brett Kavanaugh Push Supreme Court Further Out Of Step With America?