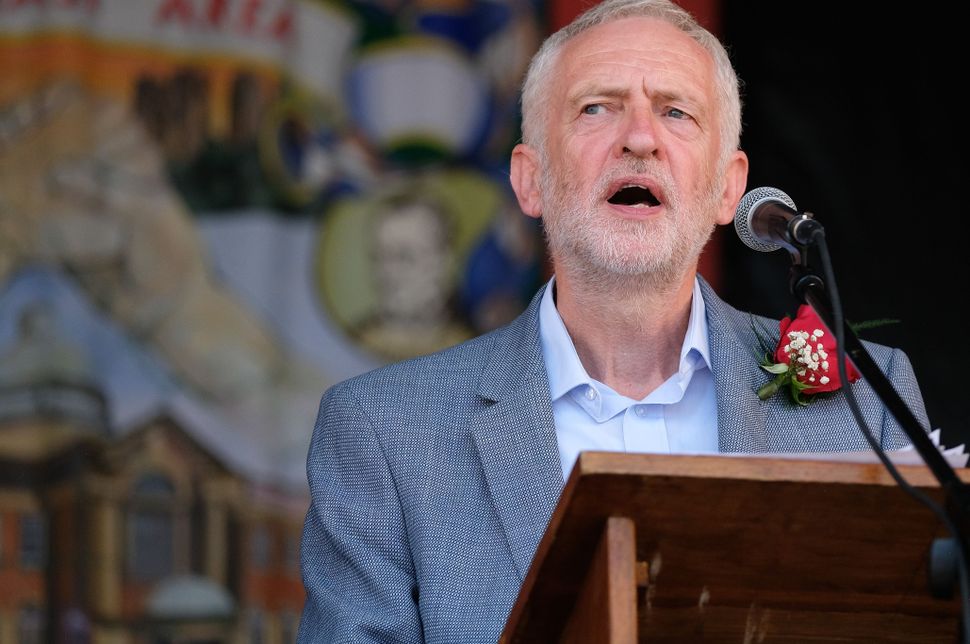 The British Labour Party has enjoyed a massive surge in membership and its best electoral success in decades under Jeremy Corbyn, the maverick socialist who rose from obscurity to capture its leadership in 2015.

But since Corbyn’s election, Labour has been marred by an anti-Semitism problem that is now tearing the party apart. An anti-Semitic culture surrounds Corbyn, with Jewish lawmakers being subjected to vicious anti-Semitic abuse in Corbyn’s name.

Most recently, labour’s Jewish problem came to a head recently when it refused to accept an extensive definition of anti-Semitism drawn up by the International Holocaust Remembrance Alliance.

The IHRA definition — used by the U.K. government and 31 others — not only elaborates on widely understood anti-Semitism, but also explains how modern anti-Semitism weaves itself into discourse on Israel and Zionism.

It’s this connection that Labour seems to be rejecting. To the dismay of 70 rabbis and the three leading Jewish newspapers, it has excluded two specific examples of anti-Semitism: describing Israel or Zionism as a “racist endeavor” and comparing Israel’s actions to those of Nazi Germany.

Labour insists that it’s only protecting its members right to criticize Israel’s government. And yet, when advocating for progressive change, invoking the Holocaust or otherwise forgoing reality in favor of dramatic rhetoric doesn’t help one’s cause.

For his part, Corbyn fiercely rejects allegations that he is an anti-Semite, pointing to his record serving a multicultural constituency in North London.

And yet, it’s difficult to square this with his defense of an anti-Semitic wall mural, or his implication of the “hand of Israel” in a terrorist attack in Egypt, which he made in an interview for Iranian television which resurfaced on social media this week.

What’s more, lawmakers Margaret Hodge and Ian Austin — who lost relatives in the Holocaust — are both facing disciplinary action after challenging their party on anti-Semitism.

It’s this aura of mistrust of Jews that permeates Corbyn’s party, and that is more troubling than the omission of examples from a definition of anti-Semitism.

But that omission is problematic, too. Zionism — like socialism, conservatism and liberalism — is a diverse ideology with a myriad of forms. The use of “Zionist” as an insult toward Jews is not just dog-whistle anti-Semitism; it’s also highly tenuous.

David Ben-Gurion, the second prime minister of Israel, was a pioneering Zionist who insisted on the inclusion and equality of Israeli Arabs in civic and political life.

In modern Israel, leftist parties such as Zionist Union and Mertez stand for a two-state solution, human rights and religious freedom.

The Omdim B’Yachad (“Standing Together”) movement is building alliances between Israeli Jews and minorities, and has organized massive protests against Prime Minister Benjamin Netanyahu’s government.

Israel was founded in defiance of racism. This makes the discriminatory policies of Netanyahu, such as the rejection of African asylum seekers and a Nation State bill widely condemned as racist, all the more shameful.

Skeptics of the IRHA definition worry that it represses valid political scrutiny; they insist it makes clear that robust criticism of the Israeli government — like of any government — is not inherently anti-Semitic. It does not even pass judgement on anti-Israel boycotts advocated by the likes of BDS or the Jewish pro-Corbyn group Jewdas, they insist.

But opponents of the Israeli government should consider that in using rhetoric more politically precise, and mindful of Jewish concerns, their arguments would actually be strengthened.

Instead of making lazy parallels with Nazism — which trivialize the Holocaust — or sweeping comments about Israel’s existence, they could specifically focus on condemning the Netanyahu government and the political parties within it.

With its far-right policies, they should make harsh but more accurate comparisons, such as to apartheid South Africa or the segregation of African Americans.

Rather than framing Israel as inherently racist, they should, in contrast, highlight progressive Israeli tradition and groups lobbying for minority and Palestinian rights.

Instead, by rejecting the IHRA definition, Labour and its supporters are failing British Jews, who once found a political home in Labour but now fear an existential crisis for their community.

In making Labour an essentially Judenrein space, they have weakened it, and weakened its power to make Israel hear its complaints. For the Jewish state is much more likely to listen to criticism from Jews than it is from an anti-Semitism tolerating British Labour party.

They are also doing a disservice to Jews, in and outside of Israel, inspired by Jewish history to campaign for peace and fight injustice.

Even if Labour fully adopts the IHRA definition in the long run, the careless arrogance shown in rejecting it may have damaged the party’s reputation beyond repair.

It makes Corbyn look less like a committed anti-racist than a global figurehead of anti-Semitism.