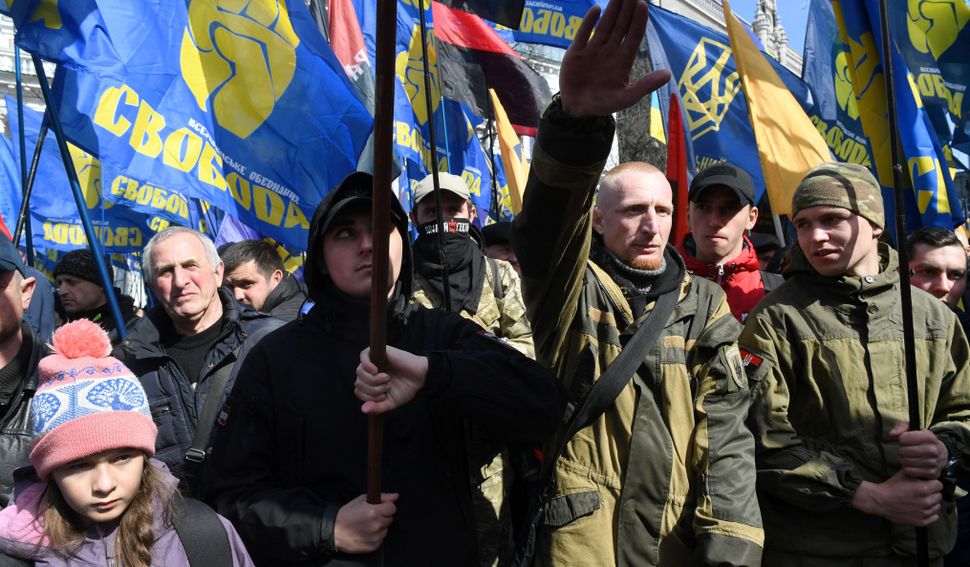 In his recent article in these pages entitled “Jeremy Corbyn And The Hypocrisy Of The American Jewish Leadership, Lev Golinkin argued that while American Jewish organizations like ADL are strong on condemning Jeremy Corbyn, we go easy on anti-Semitism in Eastern Europe.

Golinkin is correct with the first half of his argument, that ADL’s “denunciations [of Jeremy Corbyn] are certainly justified.” Corbyn could be the next leader of America’s closest NATO ally, and he finds nothing wrong with literally standing side-by-side with people whose organizations are responsible for intentionally murdering Jews.

Golinkin is wrong, though, to accuse ADL of “hypocrisy” because we are easy on “neo-Nazis and Holocaust distortion in other countries,” particularly Ukraine.

ADL’s record of public comments about Ukraine, as well as private interactions with Ukrainian officials, disproves the charge of hypocrisy. Just consider the past five months.

In April, when a march in Lviv honored a Ukrainian Waffen SS unit, we commented in an article in JTA, “Ukrainian leaders need to condemn such marches, where Ukrainian extremists celebrate Ukrainian Nazi SS divisions (1st Galician), giving Nazi salutes in uniform in the middle of a major Ukrainian city.”

In June, we met in Washington with Kyiv Mayor Vitaliy Klitchko and Ukraine’s ambassador Valeriy Chaly to raise our concerns about Ukrainian extremists and opposition to a decision by the Kyiv City Council to commemorate the 1768 Ukrainian “Koliyvschina rebellion” against Poland in which many Jews were murdered.

Later that month, at a high-level conference in Kyiv, we told the audience that the Ukrainian government’s claim that all anti-Semitic incidents in Ukraine are Russian “provocations” is just not credible.

During that visit to Kyiv, we discussed Ukrainian extremist groups and activity with Gen. Vasyl Hrytsak, Head of the Security Service of Ukraine (SBU), urging action against them and conveying our concerns about anti-Semitism.

The same day we had a very blunt conversation with Volodymyr Viatrovych, Director of the Ukrainian Institute for National Memory, about his institute’s support for the glorification of Stepan Bandera, Yaroslav Stetsko, and Roman Shukhevych, Ukrainian nationalists who collaborated with the Nazis.

Shortly after, Ukrainian neo-Nazis murdered a Roma man and we commented, “A masked group armed with batons and other weapons targeted a Roma camp in Ukraine, leaving one dead. We will continue to work with communities around the globe to fight this type of violent hatred.” We also tweeted, “Extremist murder in Ukraine. Two weeks ago in Kyiv I raised the issue of violent extremism with a very senior security official. They need to do much better.”

A few days after that we tweeted, “It’s alarming that Ukraine’s chief military prosecutor espoused age-old #antiSemiticconspiracy theory of Jewish responsibility for all conflicts.”

Just weeks ago, we briefed a senior legislative staff member on anti-Semitism in Ukraine.

As for Poland, a simple internet search for “Poland” and “ADL” will convince any fair-minded observer that ADL has been a leading critic on anti-Semitism, extremism, and Holocaust distortion. The same is true for neo-Nazi or anti-Semitic developments in other countries such as Hungary, Sweden, and Greece.

ADL is vigilant about and vocal on these subjects around the world, and we do much more than issue press releases. While Mr. Golinkin could not know about our private meetings, our public record shows that we address problems in Ukraine, Poland, and elsewhere loudly and persistently.

Andrew Srulevitch is the director of European Affairs at ADL.