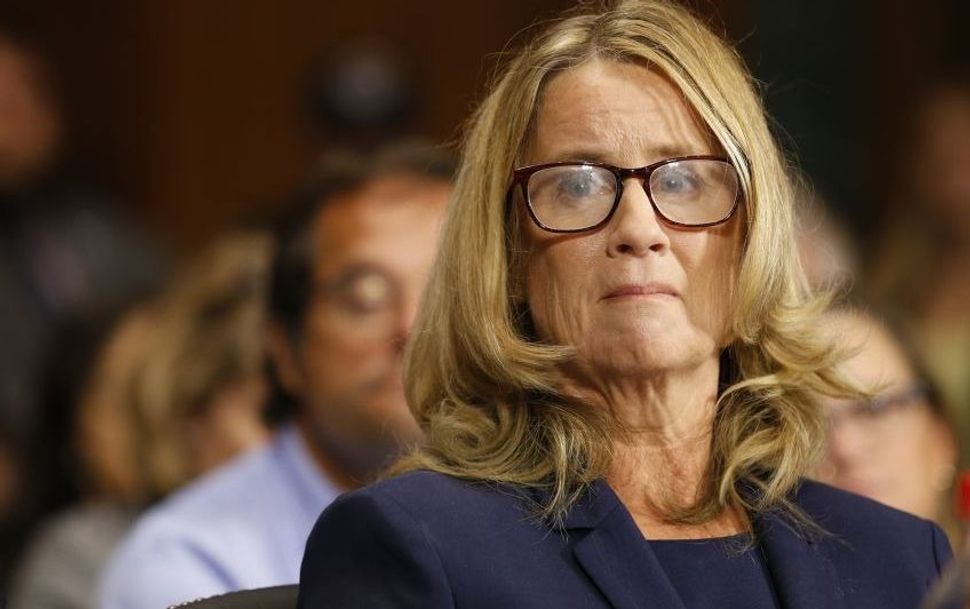 “Does that work for you as well?” Christine Blasey Ford asked the stern, shrill, aggressively defensive Republican chairman of the Senate Judiciary Committee.

“I’m used to being collegial.”

Of course she is. With those few words, Blasey Ford reflected every woman’s innate desire to please the male power structure arrayed before her, to get along with a smile and a nod, to suppress her own needs — and her own trauma.

This is why she kept the memory of an assault 36 years ago locked inside her brain, surfacing publicly only when her alleged assailant, Brett Kavanaugh, was about to ascend to one of the most powerful positions in the country.

This eagerness to please was threaded throughout her extraordinary testimony Thursday, expressed in a still, small voice with genuine hesitation and, one sensed, a lifetime of practice.

And I couldn’t help but ask myself: Do I sound like that, too?

This is what I found so resonant, and so heartbreaking about watching her guileless presentation: The terror in her eyes magnified through large glasses; her voice nearly breaking at times; tears barely held at bay.

She almost seemed embarrassed by the praise heaped on her by those puffed-up senators, some of whom clearly were hoping that her sacrifice and strength would redound back to them.

But it doesn’t work that way. Instead, women like Christine Blasey Ford, like so many of us, strive to assist the power structure rather than storm it. How many times did she say, “I wish I could be more helpful”?

When Republican Sen. Chuck Grassley demanded that she acknowledge his supposed willingness to travel to California to interview her — instead of requiring her to take an anxiety-laden trip to Washington — she replied that she would “be happy to host you.”

I half expected her to proffer him an invitation for dinner at her home.

But of course, she isn’t living there now. Blasey Ford and her family were forced to move, and move again, because of the disgusting threats against them ever since her name unwittingly surfaced during Kavanaugh’s rushed confirmation hearings — just one of the many serious sacrifices she has had to make in these last excruciating months.

She relayed this information not with complaint, but as a trembling acknowledgement of the enormous costs of her candor and the “civic duty” that propelled her to speak out.

This is what hundreds of women are discovering as the #MeToo movement sweeps through the calcified corners of our culture. It is frightening to come forward. Doing so bursts open the social bubble that has required so many women — and some men — to suffer in silence, the way that Christine Blasey was silenced when a young Kavanaugh allegedly smothered her mouth with his hand.

It is also humiliating. Because no matter how credible the charge, the accuser is always made to feel suspect, her character and behavior questioned and often impugned, just as President Trump has impugned the many women who have come forward with their stories of his misogynist behavior. (Strangely, the only women he seems to believe are Bill Clinton’s accusers.)

I heard that humiliation in the way Blasey Ford recounted what happened after she managed to wrest herself free of her assaulters and was able to hide in a bathroom while they left the room and joined the gathering downstairs. It was their drunken laughter, “the uproarious laughter,” that has haunted her to this day. The laughter of young, entitled boy-men taking terrible advantage of a young woman and not even realize the havoc that they have caused.

Because she was raised to please, to show deference. And now, in four hours of excruciating testimony, she showed us another side of how women behave.