With Nikki Haley’s Resignation, We Israelis Lost A Hero 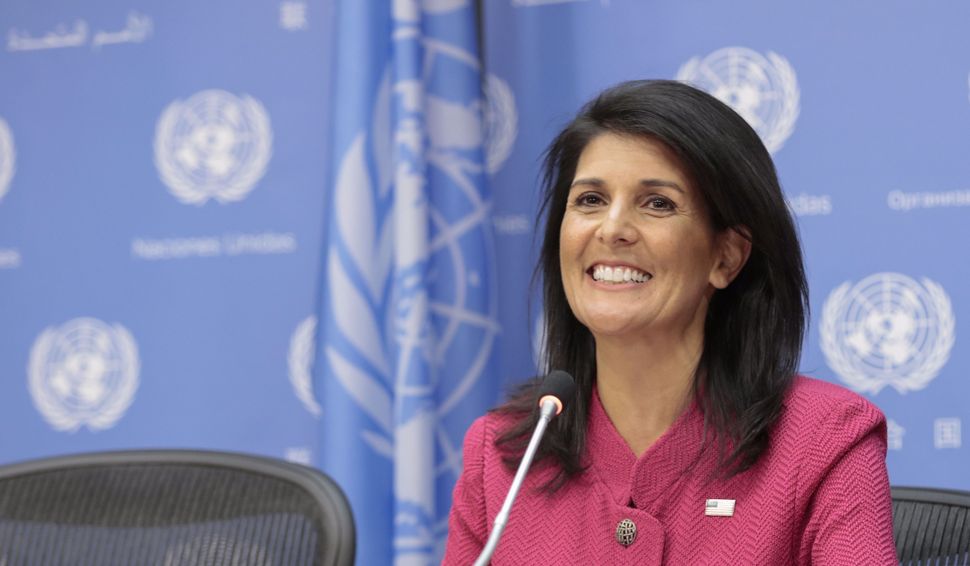 It felt like a blow. “Nikki Haley resigned” kept popping up in my messages. Similar to the texts we Israelis get when there is a terror attack, my heart sank. It’s surprising that an Israeli would feel this way about the US ambassador to the UN. Except Nikki Haley is far more than that to me, and I am not the only one:

Sad news for the Israel https://t.co/w5O8GLimGY

I. CANNOT. BELIEVE. IT. https://t.co/VYHvdyoQ0I

Haley was the international friend many Israelis have waited decades to have. The friend who called out class bullies, crushed the old boy’s club and outshone the teacher’s pet. She is the friend who has your back with grace, poise and deadly precision, just when you need her most.

In a place that has been hostile and denies us our history, Haley called a halt as the “new sheriff in town.”

And now, I feel adrift. Where is she going… and why? Who will come next? How can anyone replace her? She had honesty, the grit and the willingness to stand up for what’s right. That she did all of this without using the inflammatory and partisan language that has become de rigueur made her all the more worthy of admiration.

She was the one bright spot in what for many of us is a dark administration. Many refer to her appointment as the “one thing Trump did right.” It’s said that Israelis like Trump, and many do, but it’s mainly his attitude towards Israel that influences that feeling — and Haley was a big part of that.

This past Purim, I dressed up as Nikki Haley. Bringing truth and a good dose of “cut the crap” to an institution rife with corruption, injustice, falsehoods and historical revision made her a superhero and worthy of emulation to me.

Haley consistently spoke out against the bias she saw in the institution meant to be the embodiment of all that is good in humanity. What should have been the coming together of mankind to seek good and prosperity for the world instead has become a black hole of a back door deals where the worst human rights offenders parade as human rights defenders (UN Human Rights Council members include China, Cuba, Qatar, Saudi Arabia, Venezuela, Egypt, Iraq, the United Arab Emirates, the Dominican Republic and Congo) whose common goal is the vilification of the world’s only Jewish state.

Haley called out this bullying time and again as only she could.

“Nowhere has the UN’s failure been more consistent and more outrageous than in its bias against our close ally Israel,” she said during her confirmation hearing.

“I’ve often wondered why, in the face of such hostility, Israel has chosen to remain a member of this body. And then I remember that Israel has chosen to remain in this institution because it’s important to stand up for yourself. Israel must stand up for its own survival as a nation; but it also stands up for the ideals of freedom and human dignity that the United Nations is supposed to be about,” she told the United Nations General Assembly after they voted 128-9 to denounce the United States’ decision to recognize Jerusalem as Israel’s capital.

Hayley’s departure breeds concern and uncertainty. It’s shrouded in secrecy, so we are left to speculate.

Haley’s moral compass, strength of character and refusal to give into the worst trends we see among politicians, where ethics are sacrificed on the altar of partisanship, makes her respected by people across the political spectrum.

I know that it is bizarre to feel bereft at the resignation of an official, but I do. Yet, Haley is more than a UN ambassador. She is a tremendous friend to Israel and a major asset to the United States. She is a woman I admire, someone who told Stephen Colbert, “I wear heels and it’s not for a fashion statement, it’s ammunition,” and a stateswoman with a clear moral compass.

I don’t know why she felt she had to go; the only clue she gave was this: “There’s no personal reasons. I think it’s just very important for government officials to understand when it’s time to step aside.”

Perhaps she means she took this advice herself; perhaps she means to share it with others. Perhaps recent events have made her feel she cannot stay. Whatever the case, I hope this is not the last we see of Haley on the global stage. Both Israel and the United States need more leaders like her.

With Nikki Haley’s Resignation, We Israelis Lost A Hero