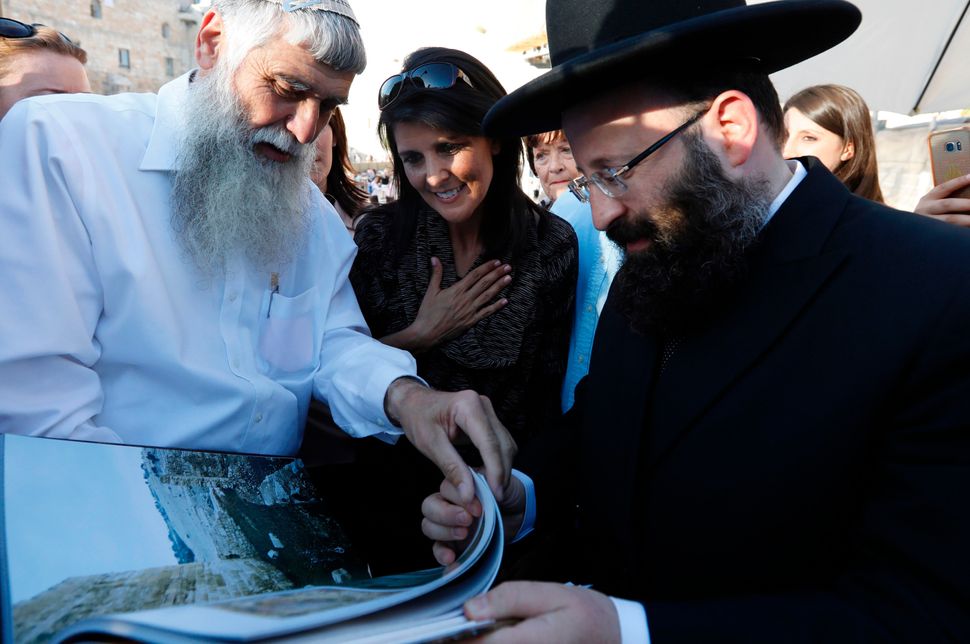 Rabbi Shmuel Rabinowitz shows US Ambassador to the United Nations Nikki Haley photos as she visits the Western Wall, Image by Getty Images

There’s a joke people are telling in Israel about Nikki Haley, President Trump’s Ambassador to the United Nations who just announced she would be stepping down in January. The joke’s setting is Mea Shearim, one of Jerusalem’s ultra-Orthodox neighborhoods. Nine men are seeking a tenth to complete the quorum necessary for prayers. Just as they are despairing, one of them spots Nikki Haley walking down the street.

“Davenin, Davenin!” He shouts at her. “Come complete our minyan!”

Of course, Orthodox Jews don’t count women in a minyan; that’s the joke – that for Nikki Haley, they would make an exception.

It’s no secret that Haley has captured the hearts of Orthodox Jews. As soon as news of her resignation hit, Twitter filled up with mournful commentary from Orthodox Jews, of a piece with the rapturous coverage in the Orthodox press she’d received over the past two years.

There’s no doubt that part of her popularity stems from the fact that she went to battle for Israel. But it’s not only thanks to Israel. Ironically, Haley’s gender — or rather, her performance of her gender — is a huge part of her appeal among the Orthodox.

Of course, Israel is an undeniable part of it. Orthodox Jews are very pro-Israel, and having an outsider take up their cause against the anti-Israel beast, just as Israel’s Prime Minister Benjamin Netanyahu once did when he was Ambassador to the UN, worked like a magic charm.

And the student surpassed the master, at least, if the crowd at this year’s American Israel Public Affairs Committee Policy Conference was anything to go by. Haley got more standing ovations than Netanyahu himself, an impressive feat.

Who could blame the crowd? Time and again, Haley has stood up for Israel in the exact terms one hears at Orthodox Shabbat tables throughout the U.S. Casting Israel as both strong and wronged, Haley’s speech at AIPAC was a perfect encapsulation of the paradox that has conservative pro-Israel Jews so frustrated.

“In the real world, Israel is a strong country with a vibrant economy and a first-class military,” she said. “On the battlefield, Israel does not get bullied. The Iranians and Syrians can vouch for that. But the U.N. is a different story. At the U.N. and throughout the U.N. agencies, Israel does get bullied. It gets bullied because the countries that don’t like Israel are used to being able to get away with it.”

She went on to tell the crowd that they were, indeed, her favorites. “Some people accuse us of favoritism towards Israel,” Haley said. “There’s nothing wrong with showing favoritism toward an ally. That’s what being an ally is all about.”

Hearing one’s cause taken up by an outsider, especially when one feels constantly gaslighted as Orthodox Jews and Israelis do, is a balm on old wounds. As the old Jewish poem goes, Dayeinu! This would have been enough!

But Haley didn’t just talk. It was, after all, under her tenure the U.S. embassy was moved from Tel Aviv to Jerusalem. And excitement for Haley only grew when she oversaw the U.S.’s withdrawal from the United Nations Human Rights Council, and the U.S.’s decision to stop funding UNRWA, the branch of the UN that funds Palestinian refugees.

While Orthodox Jews were split almost down the middle on their support for Trump, the discourse in Orthodox communities when it comes to the Palestinians is, well, Trumpian in nature. There’s little patience for even-handedness; the consensus is that the Jews are the victims of the Middle East morass, and Trump and Haley’s punitive measures have been met with celebration.

Indeed, Orthodox Jews are the only group in the U.S. among whom Trump’s approval rating since taking office has skyrocketed – to a whopping 91% at last estimate. 82% said they would vote for Trump in 2020, a huge increase from the 54% who voted for him in 2016.

So it makes sense that Haley would be popular among Orthodox Jews, as the face of Trump’s extremely pro-Israel policies.

There are signs that she’s aware of it. The cover photo of her Twitter page shows a group of Orthodox seminary girls huddled in an ecstatic gaggle around Haley. And her resignation speech called out Jared Kushner by name, another Orthodox Jew. “Jared is such a hidden genius that no one understands,” she said.

But it’s not just her pro-Israel bona fides that make her such a success among the Orthodox. The fact that she is a woman has a lot to do with it, too.

Orthodox Jews are currently embroiled in a battle over the role of women. On the one hand, huge efforts are being made to make women more visible — not literally, of course, because they must stand behind a partition in synagogue and their images are blurred out of Orthodox publications. But the Orthodox Union has recently been making unprecedented efforts to make women feel more important, including a “Department of Women’s Initiatives”.

On the other hand, a sharp line is drawn which prevents women from attaining the highest forms of leadership. They may not call themselves rabbis, even if they perform all the duties of rabbis. At the end of the day, a man must stand at the top of the ticket, even if women are performing every duty of the rabbinate.

Traditional gender roles are baked into Orthodox Judaism. Even as Orthodox women become doctors and judges, they cannot be rabbis, and they must cover their bodies and their hair according to the rules of modesty — a value that transcends clothing.

Nikki Haley embodies this paradox. Like the other women in the Trump administration — Ivanka Trump, Kellyanne Conway, Sarah Huckabee Sanders — Haley is always modestly yet professionally attired. Like those other women, she is almost always in a dress or skirt — the trademark of the Orthodox woman — and frequently in pink. And like those other women, she is strong-minded in her convictions but only to a degree, always ultimately subservient to the man whom she serves. When Haley wrote in an op ed, “When I challenge the president, I do it directly,” one struggled to think of a single time. The few times she did differ from the Administration, it was always subtly, and quickly patched up.

In other words, she is a paragon of Orthodox virtue. All of her power and standing up to bullies happens to the bullies on the other side. On her own side, she is careful to maintain the power structures and not offend her (male) superiors. She is careful to present as a woman who upholds, rather than challenges, traditional gender norms, even as she accrues power.

Or, as an Orthodox friend put it a bit more generously, “It’s the idea that a woman can respect traditional gender roles and norms (as we see it) and still be powerful and respected.” Haley embodies this value of a traditional kind of femininity that Orthodox Jews go in for in a big way.

As his wife put it, “She’s articulate, forthright, has a certain modesty about her and made a great argument for Israel.”

Powerful yet modest, standing up to bullies but insisting on her femininity at the same time, Haley’s performance as UN Ambassador — and her performance of her gender — cast her in a role that was perfectly designed to appeal to the tastes and values of Orthodox Jews (and, no doubt, conservative Christians).

As Haley once put it, “I wear heels. It’s not for a fashion statement. It’s because if I see something wrong, we’re going to kick them every single time.”

Of course they are sad to see her go. Count on it: She’ll be back.