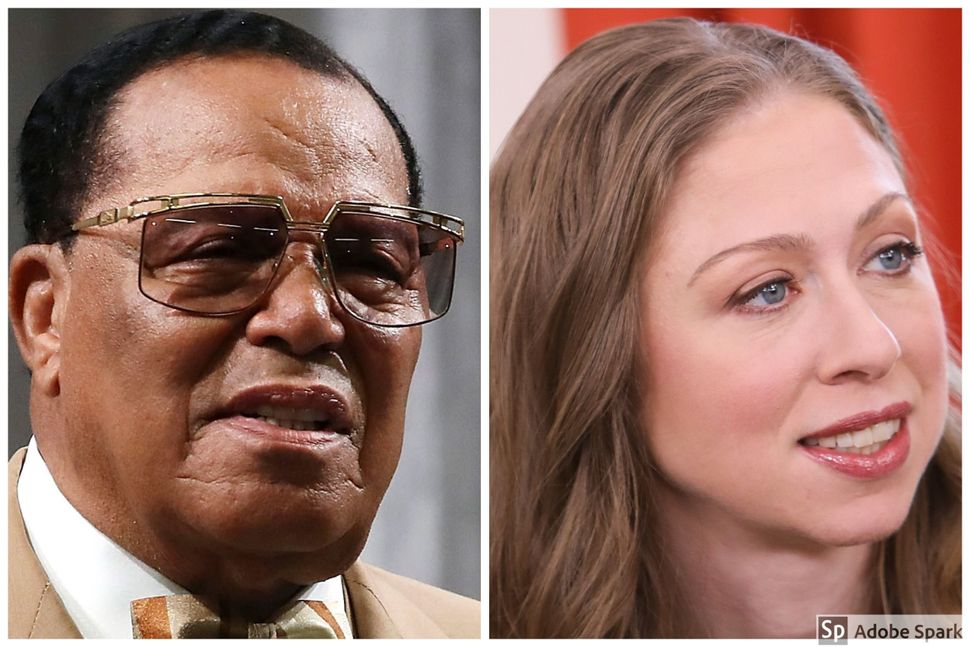 In a recent if typical tweet, Louis Farrakhan posted a video in which he used dehumanizing rhetoric to compare Jews to insects.

Watching video recording broke my heart. Hearing these words directed at me and my community shook me to my core, and thoughts about what he said chased each other around in my mind for the rest of the day.

At the same time, much of the mainstream response to Farrakhan’s statement didn’t sit well with me, either. Chelsea Clinton’s response, which has now been liked 50,000 times and retweeted over 10,000 times, summed up a lot of this response:

As a black Jew, the logic of this argument bothers me. Don’t get me wrong. Speaking out against dehumanizing language is a good thing. Louis Farrakhan’s tweets should absolutely be removed from Twitter, and he should be denounced by anyone who cares about racism.

And Clinton is right that everyone who espouses racism should be called out. You should speak out against the bigoted student at your university as well as the man walking by you on the sidewalk who says something racist into his phone.

It’s the comparison to President Trump that I take issue with. For the dynamics at play in Farrakhan’s disgusting comments are fundamentally different than those at play when we discuss dehumanizing, bigoted comments made by the President of the United States.

Donald Trump is the most powerful man on the planet. That seems very obvious, but it’s worth repeating. Trump has an almost infinite amount of power, and his words are therefore powerful, too.

When Trump insinuates that immigrants to this country are diseased and uses other dehumanizing language to refer to them, he’s in a position to do real harm.

Indeed, Trump’s dehumanizing language towards immigrants has torn apart families and ruined of lives. The Trump administration pursued a policy of family separation for several months earlier this year, in which well over 2,500 children were torn away from their families after attempting to immigrate to the United States.

Furthermore, Trump’s statements that immigrants, especially undocumented immigrants, are “infesting our country” lead to policy like ending DACA, President Obama’s Deferred Action for Childhood Arrivals, an executive order that gave a fighting chance at life to children brought to this country at a young age.

Now, with the cancellation of this policy, individuals who have “been American” their whole lives, who have few conscious memories from their countries of origin, are forced to live constantly looking over their shoulder, frightened of forced deportation to a nation they’ve never known.

Trump’s statement that immigrants from Mexico are “animals” also has real world consequences. Comments like these are what lead to toddlers, some as young as three years old, being forced to appear alone, scared and traumatized, in a courtroom.

But Trump, extreme though his actions may be, is not the only one in a position of power making dehumanizing statements and working to turn these statements into reality. We’ve all been privy to the saga of Steve King, a U.S. Representative from Iowa’s 4th district who so giddily participates in this kind of racist rhetoric that his Wikipedia page has a subsection titled “Racist comments, controversies, and far-right politics.”

King has compared immigrants to “bird dogs,” emphasizing that the U.S. should only take what he views as the “pick of the litter.”

This rhetoric is bad enough on its own, but it’s magnified when we take into account his statements that he’d fund Trump’s proposed US-Mexico border wall with money reallocated from Planned Parenthood and government welfare programs.

In fact, considering his place on the House Subcommittee on Immigration and Border Security, King’s impact on decisions like this would be outsized.

King has been a vehement supporter of many of Trump’s controversial and harmful immigration policies, and in this instance, too, the dehumanizing rhetoric spewed by King was channeled through his political power to make actual change.

Farrakhan, quite simply, has none of the institutional power held by Trump or any elected representative. He can call my people “termites” all he wants, but his words are never going to lead to any policy change, or really any significant systematic change in the lives of Jews.

At least in American society as a whole, no one gives any credit whatsoever to Louis Farrakhan or to the Nation of Islam.

Think about the fact that Nation of Islam boasts somewhere between 10,000 and 50,000 members; for comparison’s sake, Steve King’s congressional district has about 600,000 people.

None of Farrakhan’s actions can lead to internment of Jews, or incarceration of Jews, or the government cracking down on the Jewish people in the United States. He lacks the power necessary to create any form of systematic change.

Far from being taken seriously by the majority of Americans, Farrakhan’s hatred is generally only noticed when someone calls it out.

That is, if you’re a white Jew.

As a Black Jew, I know people who support the Nation of Islam. I’ve crossed streets because I know the man approaching me supports the Nation’s unique brand of anti-Semitism. This experience probably isn’t relatable at all for the white Jews reading this!

For the white Jews who’ve made it this far and not clicked away in rage, I have a question: What tangible effects have statements Farrakhan and the Nation of Islam have made had on you?

Louis Farrakhan, disgusting though he be, isn’t pushing policies to target and hurt the Jewish people. He’s not causing violent attacks towards individual Jews and he’s not the one phoning in bomb threats to Jewish community centers and synagogues and drawing swastikas [on their signs].

When both are problems plaguing the Jewish community, our selection of a relatively ineffective anti-Semite as the subject of disproportionate amounts of vitriol just seems like the wrong choice!

I agree that racism and anti-Semitism are horrible and should be combatted, full stop. Much of the time, dehumanizing rhetoric can pave the way for negative actions in the future.

That Farrakhan’s words generally don’t have a huge amount of tangible impact does not mean that they don’t deserve to be shut down. The point of this comparison is not to prohibit or discourage white Jews from speaking out against dehumanizing rhetoric; that would be utterly foolish and wrongheaded.

Rather, we must recognize that Trump’s and Farrakhan’s rhetoric are fundamentally different, and that difference lies almost entirely in power.

Trump’s rhetoric has clear effects, while Farrakhan’s words would go unnoticed by white Jews if other white Jews didn’t speak out.

It’s important to speak out against both, but the equalization of the rhetoric present explicitly in Clinton’s tweet and implied in countless other places completely ignores power dynamics and pushes us to decenter our anger from the bigots whose words actually have consequences.