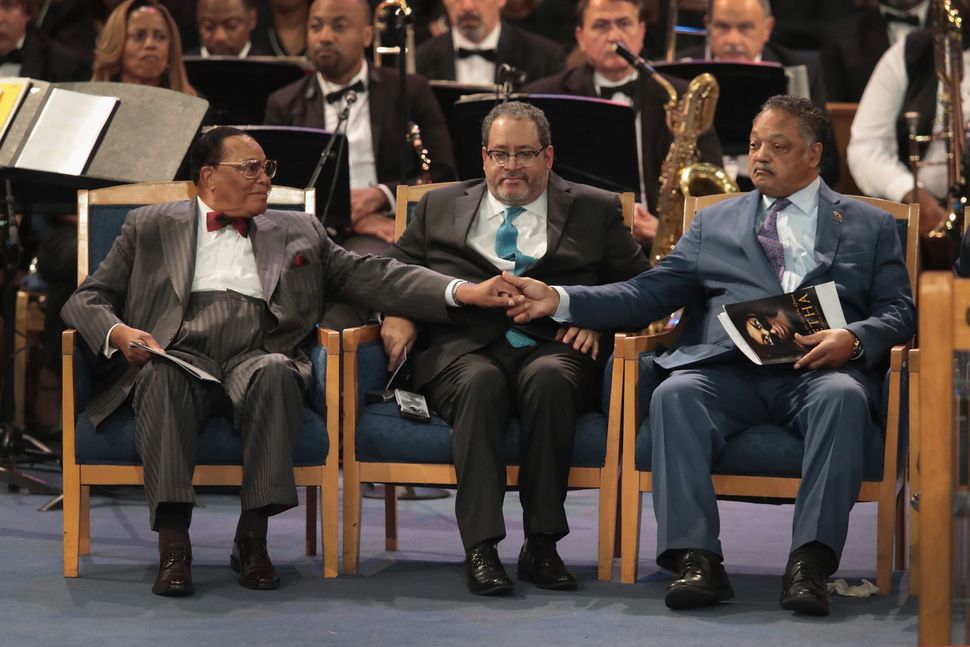 One of the most incredible Black cultural icons, the voice of a generation and the Civil Rights Movement, passed away several weeks ago after a period of ill health. Aretha Franklin was mourned in a widely publicized service whose guest list was a cross section of Black America and leaders relevant to it.

Dozens of speakers shared personal remarks about the life of this legend and her wide-ranging impact. Musicians gave soul-rendering tributes to Franklin through renditions of her timeless hits.

But despite the dozens of people who attended the service and spoke meaningfully about their relationship with Franklin, a huge amount of attention has been paid to a guest who didn’t speak a single word.

That guest, of course, was Louis Farrakhan.

Farrakhan is a known homophobe, misogynist and transphobe. He is also famous for his virulent anti-Semitism.

In a February 1990 speech, Farrakhan said that “the Jews, a small handful, control the movement of this great nation, like a radar controls the movement of a great ship in the waters.” Six years later, he said Jews “are the synagogue of Satan,” who have “wrapped” their “tentacles around the U.S. government,” “deceiving and sending this nation to hell.” Just this year, Farrakhan said Jews are “responsible for all of this filth and degenerate behavior that Hollywood is putting out turning men into women and women into men.”

White Jews have responded to Farrakhan’s invitation to and prominent seating at Franklin’s funeral with fierce vitriol. Tweets and headlines have compared the controversial leader of the Nation of Islam to former KKK Grand Wizard David Duke, and even to Adolf Hitler.

Louis Farrakhan, front and center, treated like royalty? What is this obsession with America’s Black Hitler? In spite of his crude, vicious comments about Jews, whites, gays, he is placed up front with President Clinton? Shocking! pic.twitter.com/0Q3d8yKDXR

“Louis Farrakhan, front and center, treated like royalty? What is this obsession with America’s Black Hitler?” Tweeted Dov Hilkind, a New York assemblyman who came under fire in 2013 for wearing blackface to a Purim party.

Despite this irony, Hikind’s catchy phrase, “Black Hitler,” was picked up by others like a terrible chorus line.

Let me be clear: I hate and fear Louis Farrakhan and the Nation of Islam. I’m the exact person he doesn’t want to exist. For a Black nationalist anti-Semite, nothing is more confusing than a Black Jew.

And yet, I find the vitriol of this response distasteful. For starters, Farrakhan was a personal acquaintance of the singer and icon, and it made sense for him to be in attendance at the service celebrating Franklin’s life and mourning her death. That’s the purpose of a funeral, to be a place of honor for the deceased and to bring together all those who knew them in some capacity to mourn.

Considering Farrakhan’s friendship with Franklin, his absence from the funeral would have been the option more disrespectful to her legacy.

Moreover, Farrakhan was merely an audience member. He was conspicuously absent from the lengthy list of speakers at the funeral.

Had he been invited to speak, that would have been an undue endorsement of his politics and his hatred, and I’d be the first one to criticize the climate that allowed that.

But his mere attendance at the funeral, irrespective of the location of his seat, is nothing more than acknowledgment that he is a leader in the Black community and that he was an important person in Aretha Franklin’s life.

He is a leader. Because as much as Jews and gay people and women and trans people and others who are targeted by his bigotry might not want to admit it, Farrakhan’s positive contributions to the Black community are undeniable.

He and the Nation of Islam orchestrated the wildly successful Million Man March in 1995, a gathering of between 400,000 and 800,000 Black men with a message of unity and revitalization of the Black community.

At a time when the Black community was searching for a sense of direction in how it was to address issues of unemployment, poverty, and gang violence, Farrakhan’s and the Nation of Islam’s message of Black self-reliance and self-help struck a chord within the community, even for those who found much of the rest of his teachings completely objectionable.

“If there was a situation where guys got out of hand, the Nation of Islam would step in to restore order, and walk up and down the streets if fights or bullets were flying,” Chris Hawthorne, a Black man who grew up in D.C.’s Ward 8 in the 1980s and 90s, told the Washington Post in an interview.

This is not to say Farrakhan and the Nation of Islam aren’t morally reprehensible. But their prominence in Black communities stems from the fact that they’ve provided material help to ailing communities when no one else did or would.

Meanwhile, some of those deemed “sullied” by their proximity to Farrakhan at Franklin’s funeral have themselves enacted huge amounts of harm on the Black community.

The most prominent example is former President Bill Clinton, who was seated several seats away from Farrakhan.

The optics of Farrakhan’s front row seat were understandably unfortunate. But the allegation that the honor of a man like Bill Clinton was tainted by his closeness to Farrakhan is preposterous.

Clinton’s 1994 crime bill included mandatory minimum sentences for violent and nonviolent crimes alike, as well as a controversial “three strikes” clause which mandated life in prison for individuals convicted of a violent felony after two convictions prior. This bill directly contributed to highly racialized policies of mass incarceration, due to the disproportionate effect they had on Black communities and other communities of color, often trapping families with incarcerated members in cycles of poverty.

In addition, Clinton’s repeal of the Glass-Seagal Act, which placed a barrier between commercial and investment banking, is widely acknowledged to have played a big role in causing the 2008 financial crisis, which impacted poor and Black families disproportionately.

As president, Clinton championed the NAFTA trade treaty which exacerbated the drug war and helped to destabilize Central America. Clinton also endorsed a littany of anti-LGBT policies, such as the military’s controversial “Don’t Ask, Don’t Tell” policy and the 1996 Defense of Marriage Act which defined marriage as between one man and one woman.

All this is not to say that Clinton should not have been at the funeral, but to illustrate the lack of any public outcry when a white person who’s done considerable harm pays their respects in the same ways as Farrakhan.

Of course, Clinton isn’t an anti-Semite or a homophobe. But at the end of the day, he has caused more harm to the vulnerable than many outright racists can boast of. To suggest that his honor can be sullied by anyone but his own ugly legacy is ridiculous.

Louis Farrakhan is an anti-Semite. I condemn his homophobic, misogynistic, anti-Semitic rhetoric because, as a Black Jew, I’m one of the people most likely to be hurt by it.

Jews, especially white Jews, need to recognize that this occasion simply wasn’t about them. This is about the right of Aretha Franklin’s family to have her funeral in the way they please.